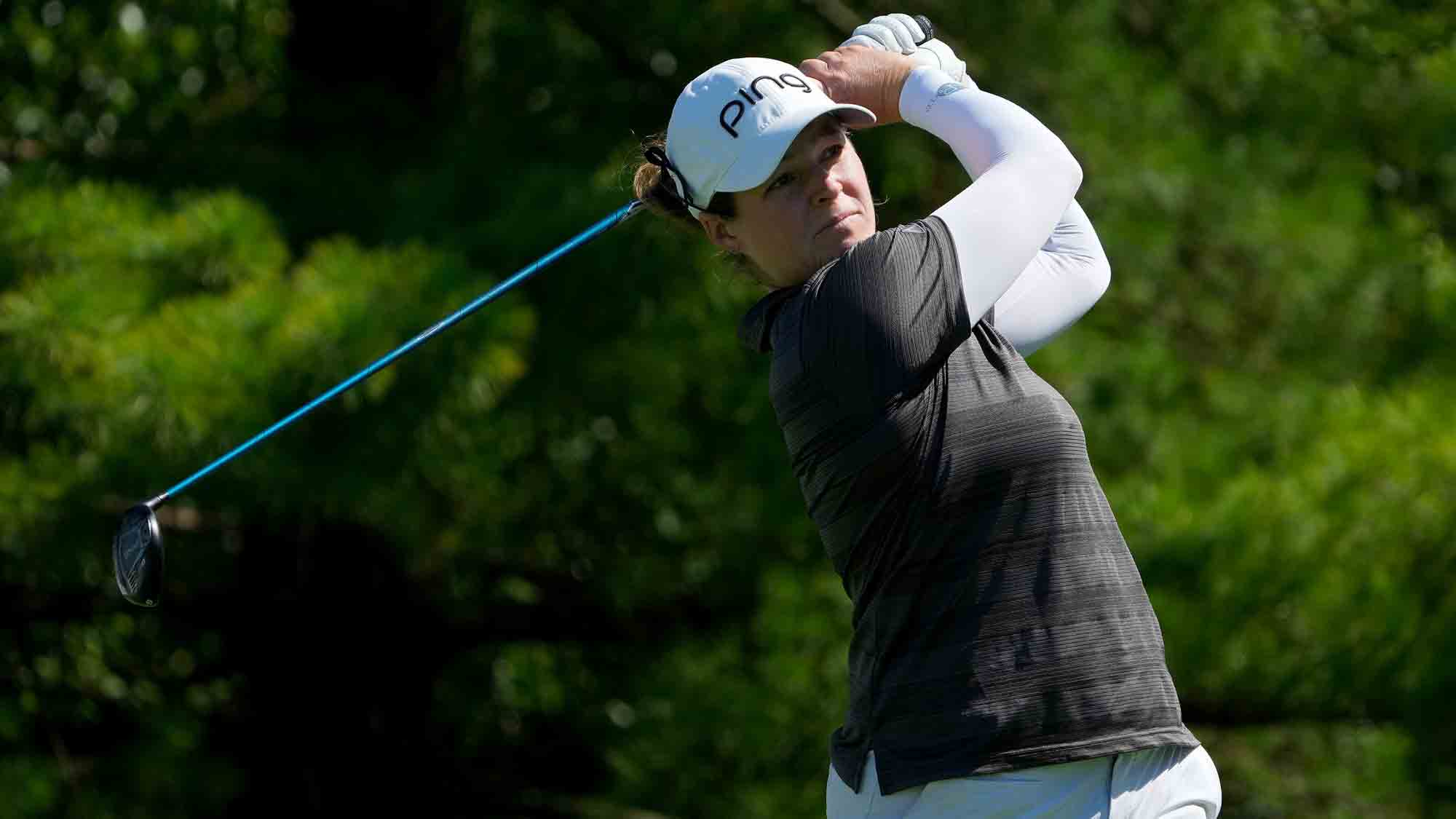 She has become the “New Course Queen,” a player who masters the mysteries of new venues faster than most. It seems that no matter how she has been playing, put Ally Ewing on a course nobody knows and she somehow comes through.

Ewing’s maiden LPGA Tour win was the 2020 Drive On Championship at Reynolds Lake Oconee. That week Mariah Stackhouse, who grew up in Georgia, and Gerina Mendoza, who played at Reynolds in a “Big Break” show on Golf Channel, were the only players who knew anything about the place. Ewing adapted quickly and won by a shot over Danielle Kang.

Her second victory was the LPGA Tour’s first visit to Shadow Creek for the 2021 Bank of Hope LPGA Match-Play presented by MGM Resorts.

Certainly 2022 hasn’t been the year she wanted. Her best finish so far has been a tie for 11th way back in January at the Gainbridge LPGA. But her best two back-to-back rounds before this week were at the Cognizant Founders Cup where Ewing opened with 67 and 66, on, you guessed it, a course that no active LPGA Tour player had played before this year, Upper Montclair Country Club.

So, her total of -11 through two rounds of the Kroger Queen City Championship presented by P&G might surprise someone who has only looked at her finishes this year. But the Kendale Course at Kenwood Country Club is a new venue for all of these players. In fact, given the early-week weather some of them saw the whole thing for the first time on Thursday during the opening round. And that is Ewing’s wheelhouse.

“I think this is a great golf course,” Ewing said on Friday afternoon as she walked off the course only a couple of shots out of the lead going into the weekend. “It’s old school. Really soft conditions, as we’ve talked about with the rain. But it is drying out. It’s firming up. I wouldn’t say it’s firm quite yet, but the greens are drying out.”

That response didn’t get to the heart of the matter. Why does she play so well at courses no one knows?

“I think there is just a freedom in seeing shots hole by hole,” Ewing said. “There is no past memory of anything. So, yeah, it’s new, but it’s exciting to be at a new course. Plus, we’ve got some great Cincinnati fans that are showing up and supporting the LPGA. That’s always fun to see at an LPGA Tour event.”

Of course, it’s not just the golf course that brought out the best in Ewing. She made six birdies in a row on her second nine on Friday. That kind of run doesn’t come out of the blue. Her game has turned around due to some extensive work and a couple of key changes in her putting.

“I’ve been hitting it great,” Ewing said. “Driving it great. It’s just kind of been — mentally I’ve kind of struggled with the putter. I’ve seen some putts miss, and then I’ve gotten down on myself. So, I’ve worked hard with my coach and we pinpointed a really big key for me. I think it’s freed me up.”

So, how can you hit that many greens and not even have a top-10 finish? The answer is simple: Ewing averages 32.22 putts per round, which is 162nd on the LPGA Tour. Scheffler, the shoo-in candidate for Player of the Year on the PGA Tour, averages 28.82 putts per round.

But in the first two rounds of the Queen City Championship, Ewing had 27 putts on Thursday and 25 on Friday.

So, what changed? What was the key?

“My tempo had gotten off,” she said. “My stroke had gotten really long. So for me, I’ve tried to get it really balanced. That’s the key. Really a lot of tempo work.

“I’ve used a metronome for years. Blast Golf (which measures stroke length and time) has helped me see some numbers.

“I’m just trying to stick with the game plan and continue to execute.”

Two more putting days like the last, and Ewing could once again be hoisting a trophy at a new venue. If it works out that way, she will solidify her title as “New Course Queen,” in the Queen City no less.