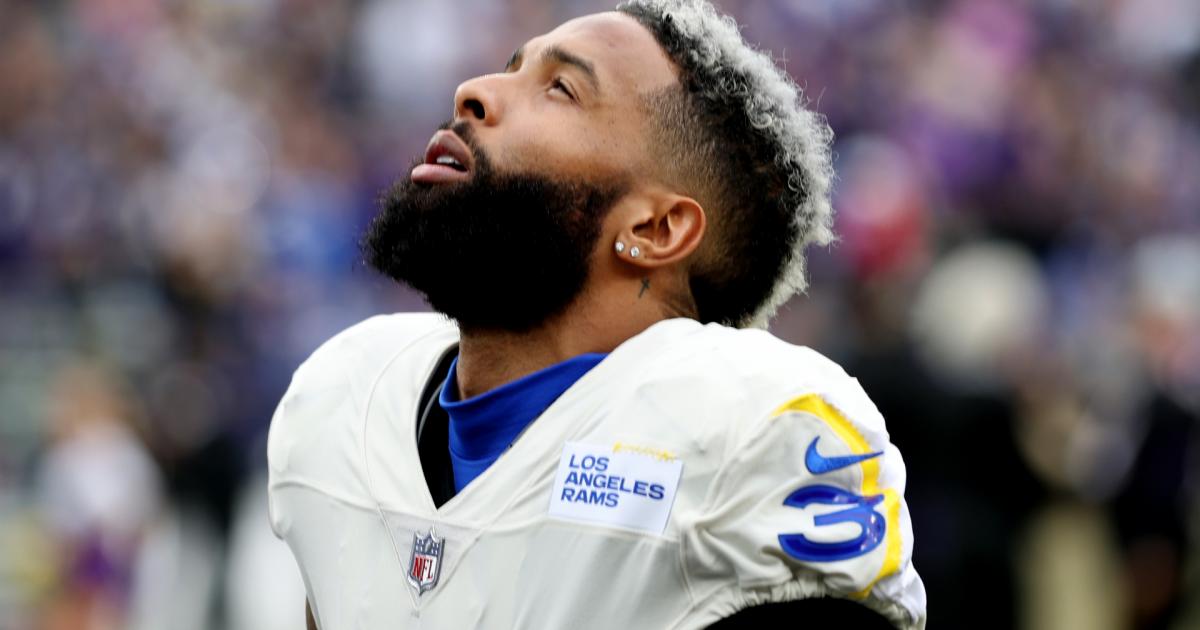 Wide receiver Odell Beckham Jr. enjoyed a resurgence of sorts in 2021, after the Rams signed him when the Browns waived him. Beckham caught 27 passes for 305 yards with the Rams in eight games, but his real impact was in the playoffs, where he caught 25 passes for 316 yards and a pair of touchdowns, with nine of those grabs and 117 yards coming in the NFC Championship Game against the 49ers.

Beckham looked primed for another strong outing against the Bengals in the Super Bowl. He caught a pair of passes for 52 yards and a touchdown early. But a torn ACL cut his game — and free agency — short. Now, as the NFL regular season approaches, Beckham still doesn’t have a team, but there are some strong indications about where he’ll end up.

Before addressing that, however, wide receiver is a position of need around the NFL — and not just on struggling teams. The Cardinals are missing DeAndre Hopkins, the Chiefs traded Tyreek Hill, and the Packers are relying on rookies. Beckham could well get some calls from teams with premier quarterbacks, but he has seemed comfortable with biding his time.

Beckham’s injury status has been kept largely mum to this point, but the rumor mill has spun up him being healthy by October or November. That, of course, means we may be a month away from seeing Beckham even signing with a team. And that could open his options even further.

What was Odell Beckham Jr.’s injury?

Beckham suffered a torn ACL on a non-contact injury in the second quarter of the Super Bowl against the Bengals. It was his second torn ACL, the first occurring in 2020.

The injury was suffered when Beckham dropped a short pass in the first half against Cincinnati. He immediately crumpled to the field on the play and grabbed his knee.

Beckham was a part of the team’s celebration at the end of the game after the Rams won the title, clearly emotional following the victory.

What is Odell Beckham Jr.’s timetable to return?

There is no definitive timetable for Beckham to return from his injury, but November seems like the earliest realistic reappearance. At 29 years old, with this being his second ACL tear in the knee, it’s hard to imagine anyone scrambling to rush him back to the field.

The silver lining, however, is that reports indicate this surgery might have fixed a botched procedure from his 2020 ACL tear. Ian Rapoport said this surgery answered questions about his previous extended rehab, and might have “extended his career.”

While that’s all conjecture at this point, the reality is teams aren’t scrambling to sign a player who might not even see the field in 2022. If he can prove his health, his market should balloon fairly quickly.

Beckham is no stranger to injuries and the road to get back from them. The NFL has put a lot of wear and tear on his body, from hamstrings to quads to his 2017 ankle injury. Much like whichever team does pursue him, it’s hard to imagine him rushing himself back either.

The Rams could have made a good-faith play and signed Beckham despite the injury, but they’re trying to defend a ring. Even so, Los Angeles is a likely destination for him if he does return this year. Although that receiver room is crowded with Cooper Kupp, Van Jefferson and newcomer Allen Robinson, Beckham brings a veteran presence and he was clearly respected in L.A. last year.

Furthermore, the Rams are reportedly keeping a locker open for Beckham — nameplate and all — according to Jourdan Rodrigue.

The Rams kept a full locker – plus name plate – open for Odell Beckham Jr in their locker room at Thousand Oaks.

While this could be eyed as a gimmick, Beckham just won a long-desired ring with the Rams and was very strict on who he even entertained signing with last year. We know they’re on a shortlist.

OBJ was even at the Rams opener Thursday night.

OBJ is back in the building tonight. pic.twitter.com/dqRSaM2psP

Another team could be the Bills, although the proximity to Lake Erie could be a red flag for Beckham. Former Rams teammate Von Miller has openly stumped for the Bills to sign Beckham, but their relationship makes that relatively unsurprising.

If the Rams wait until Beckham gets completely healthy, however, they could well get scooped. The Chiefs, Broncos, Packers and Cardinals all have some questions at receiver that could be addressed by Beckham if they get off to slow starts. The Cardinals, of course, are tricky due to the six-game Hopkins suspension. But anyone looking to sign Beckham has to know they’re taking a gamble.

Beckham’s next deal is likely to be a short-term one, and for what it’s worth, there are no rumbles of retirement. At 29, Beckham might have another long-term contract in him. But he’ll have to prove himself once again if he’s able to return this season.