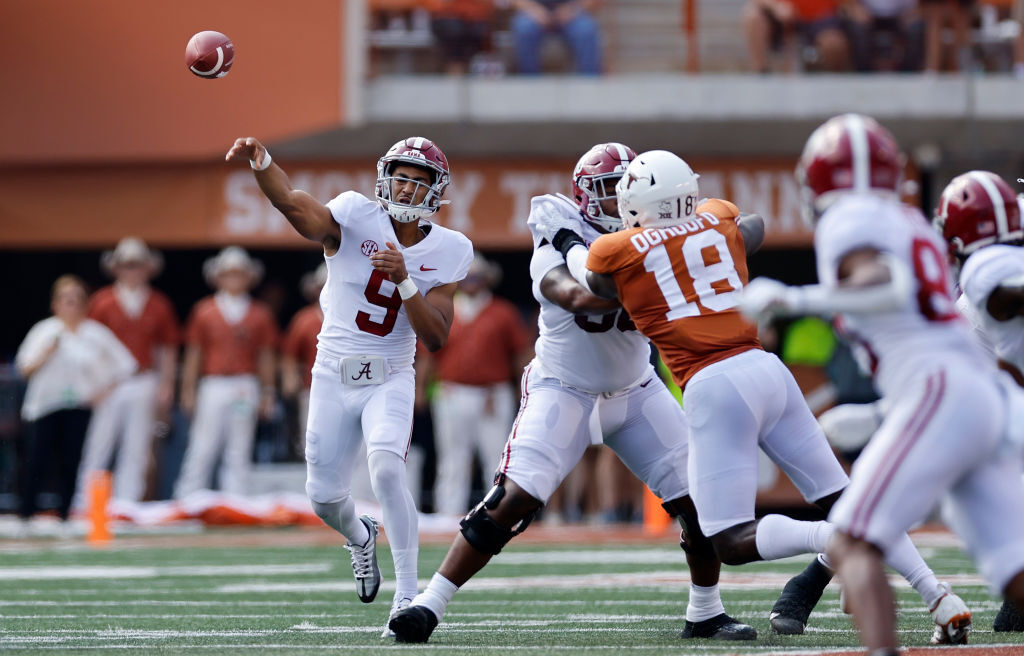 Bryce Young’s late-game heroics saved No. 1 Alabama with a 20-19 road win at Texas. Alabama kicker Will Reichard sealed the victory with a 33-yard field goal with 10 seconds left in the game. The kick came at the end of a wild fourth quarter which featured two field goals for Texas, Bryce Young’s first passing touchdown and a turnover on downs for Alabama with less than four minutes to go.

Though Young was less than stellar through the first three quarters of the game, in part due to drops, his fourth quarter play was just enough to secure the victory. On an 11-play, 75-yard drive — the only fourth quarter possession to end in a touchdown — Young worked magic by going 6 for 8, passing for 51 yards with 17 yards rushing, one fourth down conversion and a 7-yard touchdown pass to Jahmyr Gibbs. Young’s magical fourth quarter helped redeem his stats as he finished the game with 251 total yards and one touchdown.

Gibbs finished with 74 yards on a team high nine catches, while RB Jase McClellan, who scored Alabama’s only other touchdown during the day, finished with a game-high 97 rushing yards.

Though Alabama escaped with the victory, it wasn’t pretty. Alabama charted 15 penalties during the game, the most ever during the Saban era, and narrowly escaped an upset due to a valiant effort from Texas.

Despite this loss, the Longhorns put the world on notice. QB Quinn Ewers went down early with an apparent left shoulder injury after throwing an impressive 9 for 12 for 134 yards. But then his back up stepped up. Sophomore QB Hudson Card led the Longhorns to multiple scoring drives and finished the game going 14 for 22 for 158 yards. Kicker Bert Auburn, who contributed four field goals, kicked the go-ahead field goal with 1:29 left.

This addition to the stat sheet, however, left too much time on the clock for Nick Saban and the Tide, who ultimately charged down the field and notched a game-winning field goal from Reichard, taking the opportunity for a “(Bert) Auburn seals upset over No. 1 Alabama” headline with it. Instead, Alabama took the win in the programs’ first regular season meeting since 1922.

Texas will look to bounce back from today’s loss next week in another home game against UT San Antonio. Alabama moves to 2-0 on the year and heads back to Tuscaloosa for a Week 3 matchup against UL Monroe.