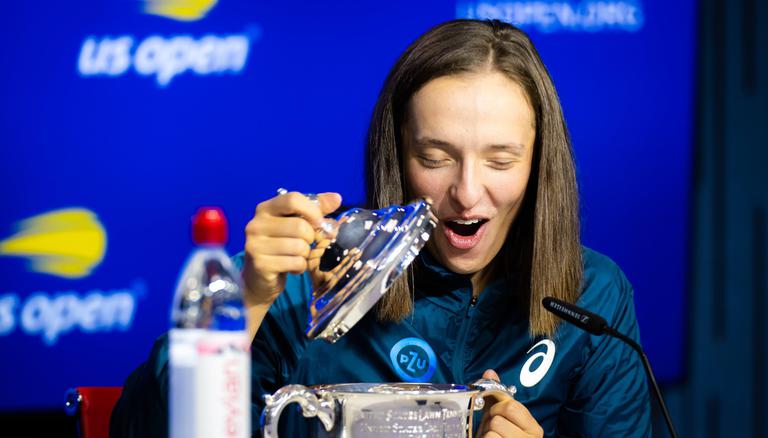 US Open 2022 champion Iga Swiatek was left stunned after receiving a special gift from the organizers following her win over Ons Jabeur in the finals on Saturday. The Polish international defeated the world number five by a set score of 6-2, 7-6 (5) at the Arthur Ashe Stadium to lift her maiden title in New York and third Grand Slam overall.

Swiatek left amazed after receiving gift from US Open

World number one Iga Swiatek, who has a habit of looking inside the trophy she wins, received a tiramisu on Saturday from the organizers to celebrate her US Open 2022 win. After the Polish international finished her press conference, the moderate advised her to open up the top of the trophy, stating that there may be something inside.

As Swiatek lifted the lid of the trophy, the United States Tennis Association’s Managing Director of Corporate Communications Chris Widmaier said, “We notice you always check your trophy. This time we wanted you to find something. It is from the US Open.”

On receiving the special fit, an astonished Swiatek said, “Thank you. I really appreciate it. Especially since I didn’t have anything to eat.” The US Open decided to gift the 21-year-old tiramisu after she said that she would celebrate her Roland Garros victory earlier this year by eating the desert.

Despite scripting a record of becoming the youngest woman singles player since Maria Sharapova in 2008 to win three Grand Slam titles, Iga Swiatek said that she did not expect to win the US Open title because of the speed of the surface. At the age of 21, she managed to win two Roland Garros titles and now a championship in New York.

While speaking at her press conference following her US Open 2022 title win, Iga Swiatek said, “I wasn’t sure if I was on the level yet to win actually a Grand Slam, especially on US Open where the surface is so fast. It’s something that I wasn’t expecting for sure. It’s also like a confirmation for me that sky is the limit. I’m proud, also surprised a little bit. Just happy that I was able to do that.”