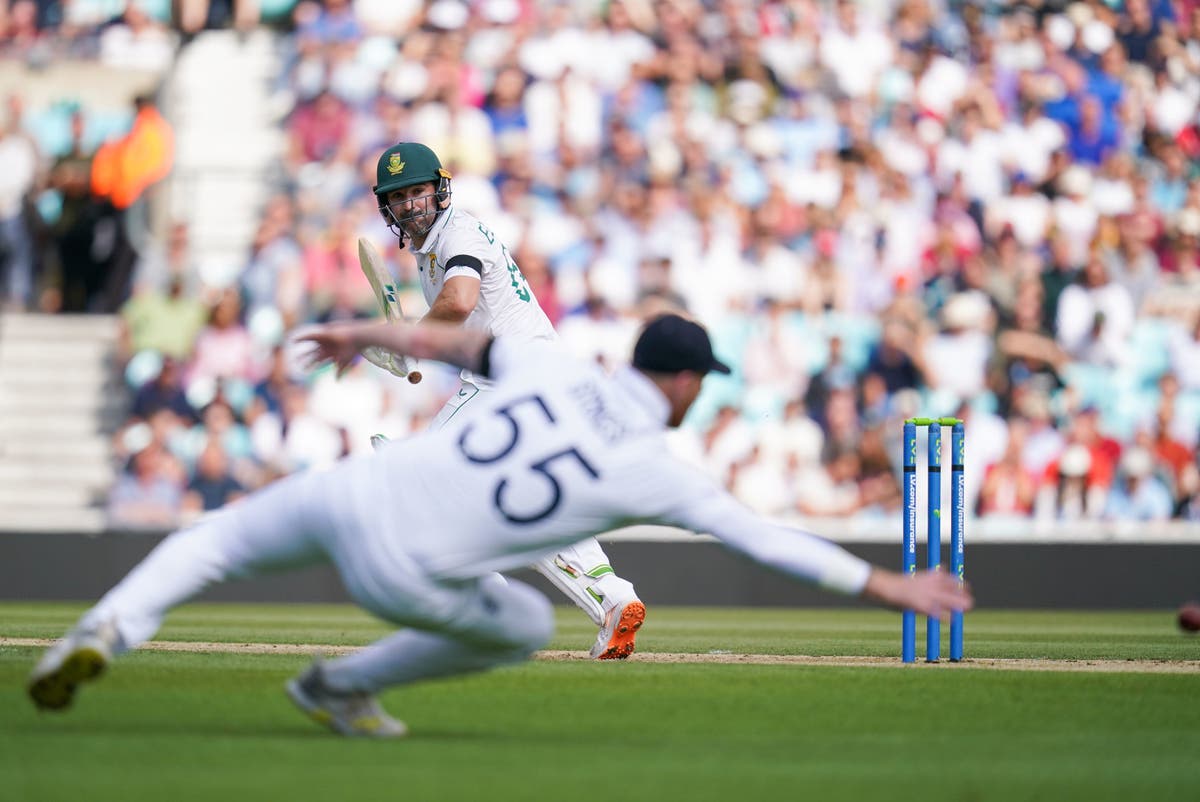 England resume Day 4 with a lead of 36 runs after reaching 154 for seven as wickets tumbled on Day 3 with seamer Ollie Robinson taking five for 49 to skittle South Africa out for 118 at The Oval.

England started fast after Day 1 was washed out due to rain, while there was no play on Day 2 in respect for Queen Elizabeth II. But the ECB opted to carry on, unlike other sports, on Saturday with a thrilling series finally set to reach its conclusion after the Proteas won the first Test, only for Brendon McCullum’s side to respond superbly and level the series with victory in the second Test.

After winning the toss and bowling South Africa out cheaply, England also struggled with the bat and had only a narrow advantage at the close. Ben Foakes was not out on 11 and Robinson was on three when the umpires brought play to a halt due to bad light with left-arm paceman Marco Jansen almost matched Robinson with the ball, taking four wickets for 34 runs. Follow all the action on day four of the third Test below:

Broad appeals for LBW on Petersen, Stokes has a thing, but a chuckle and then a spin back to his fielding position removes any drama over an appeal.

There we go… OUT! Broad didn’t have to wait long, that is plum.

McCullum with a big round of applause from the pavillion.

Left-arm seamer Marco Jansen took a career best 5-35 as South Africa bowled England out for 158 early on day four of the third and final test at The Oval on Sunday, before moving into the lead on 70 for one at lunch in their second innings.

Captain Dean Elgar was 35 not out and Keegan Petersen on seven with the touring side 30 runs ahead having seen off the new ball in difficult batting conditions.

The game has moved forward at pace with 20 wickets falling in four sessions after day one was washed out by rain and the second was cancelled as a mark of respect following the death of Queen Elizabeth.

Both teams’ first innings lasted 36.2 overs as the seamers made hay on a helpful wicket, but England were frustrated in their search for a breakthrough, not helped by wayward lines that gave the visitors regular scoring opportunities.

There is still plenty in the wicket, and Elgar and fellow opener Erwee (26) rode their luck before the latter edged England captain Ben Stokes to Joe Root at first slip with the score on 58.

England had resumed the day on 154 for seven, but lost their last three wickets in 13 minutes for the addition of four runs.

Kagiso Rabada (4-81) had Ollie Robinson (3) caught by Elgar at short mid-off, before Jack Leach played the ball onto his stumps off the speedster.

Jansen wrapped up the innings when he claimed a first five- wicket haul in test cricket when Ben Foakes (14) edged a delivery to Petersen at third slip.

The series is poised at 1-1 after both teams won by an innings inside three days in the two previous games.

Elgar and Petersen avoid another breakthrough.

They get to lunch and have a lead of 30 runs.

Stokes gets the breakthrough, magic from the captain!

It’s a fuller length and Erwee comes at it and is deceived by the swing.

It’s low, but Root gets low and grasps it, smart catch. The lead is 18 runs.

The lead is up to 17, England having conversations over a new ball?

The Proteas look to have the momentum here.

England bowling a little short and need a change of plan here.

Anderson back on, will Stokes bowl soon? Breakthrough needed to set up a manageable chase.

Elgar caught off guard there, it’s spat up from the wicket and pinged to fourth slip.

Stuart Broad now on for England, who search for a breakthrough, as the lead is about to vanish.

Still up by eight runs, the Proteas have started superbly.

Elgar is digging in, very gritty and the pressure could switch to England if he continues.

Dropped? Length ball and nudged to Anderson, it’s grabbed on the bounce.

A few moans from the Oval crowd.

Robinson thinks he’s got a catch here, Erwee nicks it to fifth slip!

The crowd aren’t sure, but go up with a crackle around the Oval.

The soft signal from Nitin Menon is not out, Chris Gaffaney could overrule but the replay shows a little brush of the turf before Anderson snaffled it.