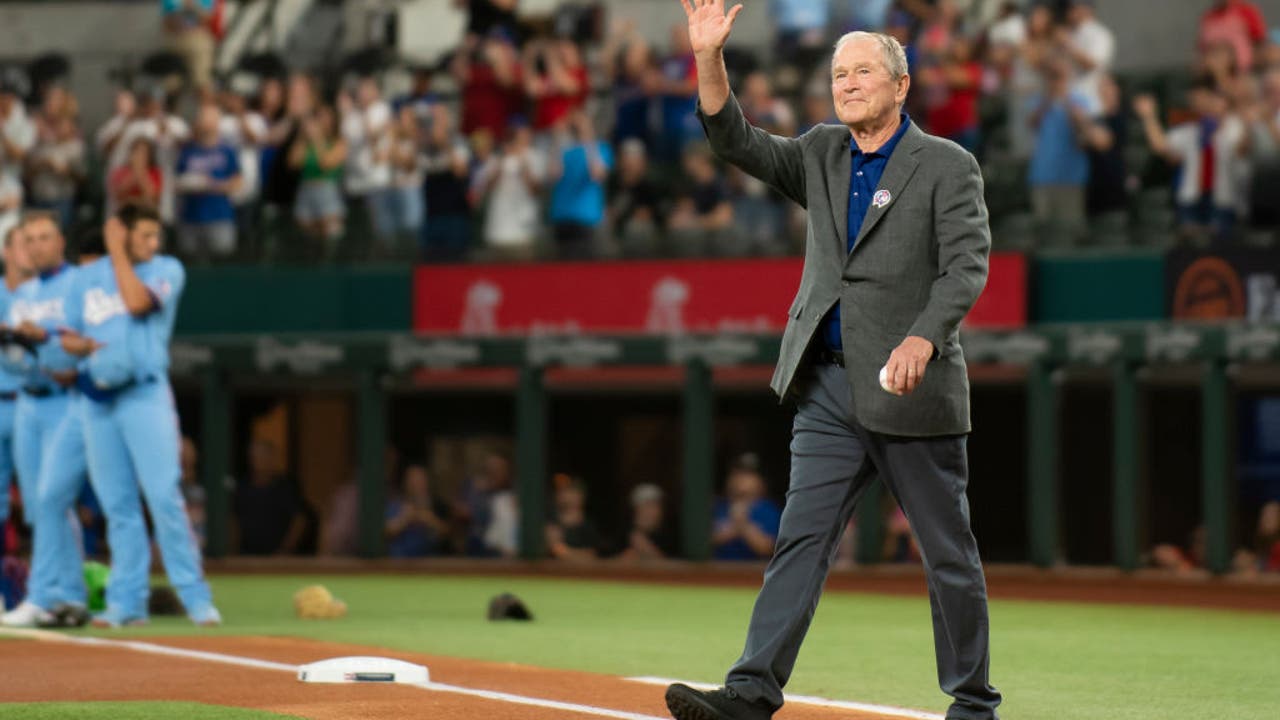 ARLINGTON, TEXAS – SEPTEMBER 11: Former President of the United States, George W. Bush, waves to the crowd as he participates in the ceremonial first pitch prior to the start of the Texas Rangers home game against the Toronto Blue Jays at Globe Life

There were moments of silence, remembrances and tributes at ballparks all across America on the 21st anniversary of 9/11.

“It’s a moment in our country’s history. We all have certain things we remember, where we were when it happened and how we felt. So many people involved, so it’s a chance to honor those people today. Realizing the people and families that were affected by this that are still feeling the pain from it,” Mets manager Buck Showalter said before a game in Miami.

Bush, who was president on the day of the attacks, was at Globe Life Field as the Rangers played Toronto. He joined Jimmy Pollozani, a police officer in nearby Fort Worth, and Pollozani’s 13-year-old daughter, Andita, in the ceremony.

They represented police officers, firefighters and first responders across the state. Andita threw the pitch to Rocky Wolfe, a firefighter from the central Texas city of Killeen.

Bush famously delivered a perfect strike before Game 3 of the 2001 World Series at Yankee Stadium between the Yankees and Arizona Diamondbacks weeks after New York City’s twin towers fell.

There was a moment of silence before the Blue Jays and Rangers played. During the Canadian and U.S. national anthems, Bush stood between Texas interim manager Tony Beasley and first base coach Corey Ragsdale in front of the home dugout.

Bush delivered the ball to Andita and gave her a hug and a word of advice before she threw from just in front of the mound. Afterward, Bush gave a fist bump to her father before they left the field.

Bush received rousing applause when he was announced. As he headed toward the Rangers’ dugout afterward, some fans chanted, “USA! USA!”

All Rangers and Blue Jays personnel in uniform wore a special Patriot Day patch on their caps. Special lineup cards and base jewels were used.

Bush was part of the investment group that owned the Rangers from April 1989 until June 1998 and remains involved with the club. He and wife Laura have lived in Dallas since he left the White House in January 2009.

At Yankee Stadium as New York played Tampa Bay, Judge wore cleats marking the day. His left cleat had “9/11 Patriot Day” on the back and the right one had “9-11-01.”

The Yankees wore hats in tribute of 9/11 responders rather than their interlocking NY.

Starter Domingo German’s cap said NYPD and there was a mix of FDNY. He sprinted to the bullpen to warm up holding an American flag in his right hand, drawing cheers from a crowd that had been sitting through a rain delay.

Manager Aaron Boone placed a wreath at the monument in Monument Park that was dedicated on the first anniversary of the attacks.

The Mets wore caps with insignias representing New York first responder departments. Featured were the city’s police and fire departments as well as Port Authority Police and departments of sanitation and correction.