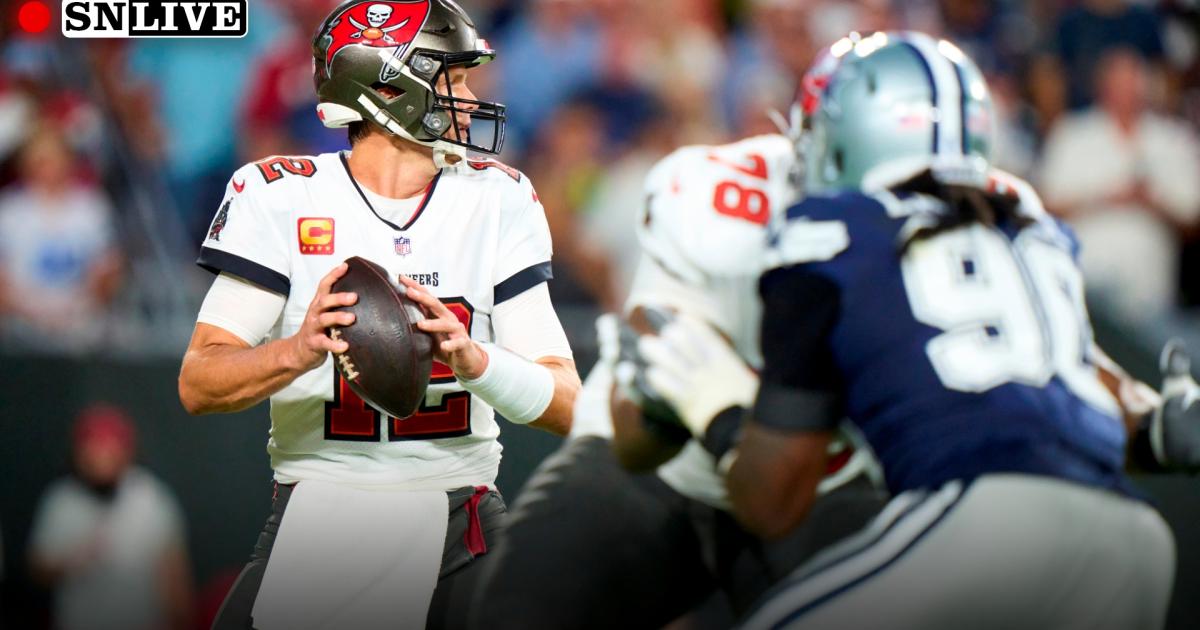 Buccaneers vs. Cowboys in Week 1 of the NFL season. Sound familiar?

After Tampa Bay won Super Bowl 55, it opened the 2021 NFL season with a Thursday night matchup at home against Dallas and unfurled the banner for its second title. This year, the Buccaneers will close out the first Sunday of the NFL season when they hit the road to face the Cowboys.

These teams are coming in with different looks from a season ago. Both suffered major injury losses on the offensive line during the offseason. The Buccaneers lost tight end Rob Gronkowski to retirement. The Cowboys traded wide receiver Amari Cooper to the Browns.

But these two teams remain among the best not just in the NFC, but also the NFL. Their offenses are poised to put up points in bunches, which should lead to another thrilling matchup after last year’s 31-29 Tampa Bay win.

The Sporting News is tracking live scoring updates and highlights from Cowboys vs. Buccaneers. Below are the key moments from the first “Sunday Night Football” game of the 2022 NFL season.

9:15 p.m.: It hasn’t been an ideal Week 1 for kickers, and that extends now to Succop, who misses a 36-yard try that would have pushed Tampa Bay’s lead up to six.

9:11 p.m.: 2021 Defensive Rookie of the Year Micah Parsons making his presence felt, blowing up left tackle Donovan Smith for a sack of Brady to force Tampa Bay to settle for a field goal. Smith was injured on the play.

Last year’s DROY spinning his way to a sack 🌪 @MicahhParsons11

9:10 p.m.: Rachaad White rushes for a loss of one, but Brady finds Godwin for a gain of six on the next play to move the Buccaneers up to the 14, now facing a 3rd-and-5.

9:09 p.m.: Fournette rushed for a loss of one, but more than redeemed the run for a loss, catching a pass down the left sideline for nine and then rushing 10 yards down that way again to move out to the Cowboys’ 13.

9:05 p.m.: Jones picks up the first down with a jet sweep toward the right side for a gain of five yards.

9:05 p.m.: Fournette starts the drive with gains of six and two to bring up a 3rd-and-2 for the Buccaneers.

9:03 p.m.: Lamb can’t make the contested catch on a slant route that would have given Dallas a first down. Instead, Anger punts it again. Darden returns the ball nine yards from the Buccaneers’ 30 out to the 39.

8:59 p.m.: First quarter comes to a close after Pollard rushes for a yard and Schultz catches a pass for five. When the game returns, Cowboys will be facing a 3rd-and-4 from their own 16.

8:58 p.m.: Improved return from KaVontae Turpin out to the Dallas 20 from his first return, but a holding penalty brings him back 10 yards. So far, Cowboys have an average starting field position of the 12-yard line.

8:55 p.m. Buccaneers scoring play: Kickers have accounted for all the offense so far. Succop’s field goal is good as Tampa Bay takes its first lead of the night with 1:06 left. Buccaneers take a 6-3 lead.

8:54 p.m.: Brady misses two passes to Evans and Jones, with a rush of five by Fournette sandwiched in between, and Succop will come out to kick from 38 yards out.

8:51 p.m.: A gain of 19 on another laser from Brady out to Evans along the left sideline. He then finds Julio Jones for a gain of eight. That was his shortest completion of the day, as he’s now 4-for-4 with 71 yards.

8:48 p.m.: Bryan Anger with a solid punt of 51 out to the Buccaneers’ 22, but Jaelon Darden weaves his way down the left side for a return of nine.

8:46 p.m.: Nearly an interception as Prescott’s pass out to Lamb is tipped by Lavonte David, and Jamel Dean can’t make the diving snag. Next throw is also incomplete out to Schultz. Dallas will have to punt.

8:45 p.m.: Elliott is off to a hot start tonight. He rushes for seven yards, and leads the game with five carries for 27 yards. False start by Dallas backs the Cowboys up five yards after the play, however.

8:41 p.m. Buccaneers scoring play: Succop drills the 44-yard try to even the game. Buccaneers tie the game at 7-7.

8:40 p.m.: Demarcus Lawrence bursts through the line past Shaq Mason and stops Fournette behind the line for a loss of a yard. Ryan Succop on for the field goal try.

8:39 p.m.: Fournette takes a carry seven yards ahead, but is stopped for only two on his next rush. First third down of the game for Tampa Bay at the Dallas 25.

8:38 p.m.: Following a run by Leonard Fournette of two yards, Brady fires a bullet to Mike Evans 20 yards downfield. No rust for him either after missing some time in the preseason.

8:37 p.m.: Chris Godwin was questionable to play this game, but he looks more than healthy. He catches a wide receiver screen and takes it 24 yards up field out to the Tampa Bay 44.

8:36 p.m.: Tampa Bay’s drive will now start five more yards back after a false start is called on Cameron Brate.

8:32 p.m. Cowboys scoring play: Brett Maher makes the long field goal to put Dallas on the board with 9:06 remaining in the half. Cowboys take a 3-0 lead.

8:31 p.m.: Pollard was tackled for a loss of a yard, and Lamb hits Schultz trying to make a catch on a wide receiver screen. Then Prescott misses Schultz downfield, and the Cowboys will have to try a 51-yard field goal.

8:29 p.m.: Cowboys face a third down after an incompletion and short rush of two yards for Elliott. 3rd-and-8 for Dallas at the Tampa Bay 40.

8:27 p.m.: Elliott picks up the first down with a rush of four up the middle, but left guard Connor McGovern was injured on the play.

8:26 p.m.: Cowboys try to flip the ball to Tony Pollard, but he is caught eight yards behind the line for a big loss. Prescott picks most of that back up, however, with passes to Dennis Houston for 11 and a pass to CeeDee Lamb for 16. Elliott then carries for 6 up to the Buccaneers’ 47 with 12:35 on the clock.

8:24 p.m.: Prescott starts the drive with an 8-yard pass out to Dalton Schultz, and Ezekiel Elliott follows that with a rush for 7 up to the Cowboys’ 28.

8:23 p.m.: Not an ideal start for the Cowboys as the kick return spots them only out to the Dallas 14.

8:13 p.m.: Carrie Underwood kicks off the “Sunday Night Football” program with her staple song ahead of the Buccaneers vs. Cowboys clash.

8:04 p.m.: Think Tom Brady’s ready for his first game since retiring and un-retiring?

We missed the LFGs 🗣 @TomBrady

8 p.m.: Dak Prescott is taking his role as leader of the Cowboys quite literally with his cleats.

The Cowboys and Buccaneers will kick off at 8:20 p.m. ET, 7:20 p.m. local time. The game will be played at AT&T Stadium in Arlington, Texas.

What channel is Cowboys vs. Buccaneers on today?

Streamers will be able to watch the game via NBCSports.com or Peacock, or by using fuboTV, which comes with a free trial.

Viewers in Canada can watch the game on DAZN with a subscription.

Below are the top TV markets in the United States and the NBC affiliate/TV channel for each.