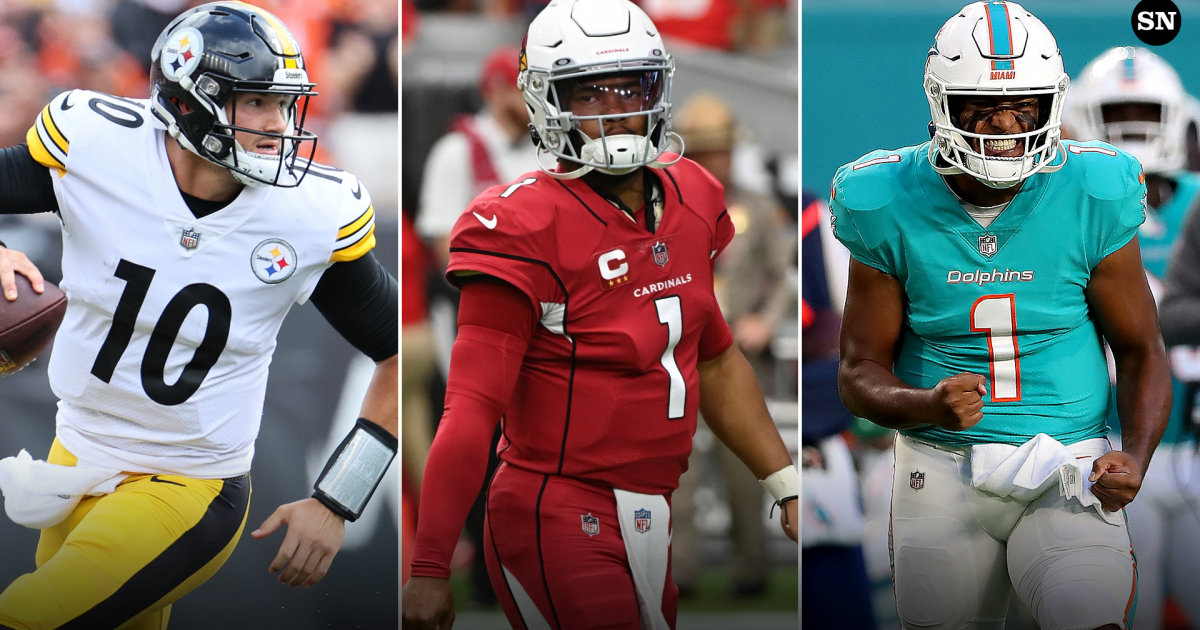 Nine NFL playoff teams from last season lost in Week 2. That left the door for some playoff upstarts for 2022 to make their case for this season.

Baltimore and Miami just missed the postseason in 2021. Now, they meet in Week 2 in what should be one of the best games of the week. Lamar Jackson could get JK Dobbins back, and Tua Tagovailoa has improved with the help of Tyreek Hill and Jaylen Waddle. That game might not have the hype of the Thursday Night Football showdown between the Chiefs and Chargers, but it will be just as entertaining from a scoring standpoint.

The Vikings also made a statement in Week 1 with a 23-7 victory against Green Bay. While the Packers will look to avoid a 0-2 start against rival Chicago on Sunday Night Football; Minnesota can assert early control of the NFC North at Philadelphia.

Here are our straight-up picks for Week 2 (lines courtesy of Caesars):

This is a rematch of last year’s TNF thriller the Chiefs won 34-28 in overtime. The road team has won the last four meetings, too. Six different Kansas City players scored TDs in Week 1. The Chargers need to get a running game going behind Justin Herbert, who might be without Keenan Allen (hamstring). The home team breaks through here.

Joe Flacco is 17-3 against the Browns as a starter, but that was with the Ravens. The Jets were 2 of 14 on third down against Baltimore, and that means Cleveland will turn Myles Garrett loose. It’s another dose of Nick Chubb and Kareem Hunt, and the Browns are off to a 2-0 start.

The Commanders are underdogs on the road despite a promising debut from Carson Wentz, who threw four TDs against the Jaguars. The Lions showed fight after digging a huge hole against the Eagles, and this is a must-win game of sorts for Dan Campbell in the early season. A last-second field goal either way.

The Saints are 4-0 against Brady in the regular season since he joined Tampa Bay, though the Buccaneers did win the playoff matchup. The Bucs (152 rushing yards) and Saints (151 rushing yards) ran the ball effectively in the opener, and whoever supports Tom Brady or Jameis Winston better in that regard wins this game. Tampa Bay has to finish in the red zone. This will come down to the last possession, and Brady delivers the win.

The Giants have the opportunity to be the surprise 2-0 team of the early season under Brian Daboll. This will be another chance to reheat that 2018 NFL Draft debate between Baker Mayfield and Saquon Barkley, who had 194 total yards against the Titans in Week 1. Mayfield leads another comeback, but this one falls short.

There are some key injuries to sort out here, including Mac Jones (back) and Najee Harris (foot). The Steelers will be without T.J. Watt (pectoral muscle), so it’s about generating a consistent pass rush without their star player. The Patriots are the road favorite, but Pittsburgh pulls off another upset at the newly-minted Acrisure Stadium.

The Colts were a Week 1 dud in a tie against Tennessee given the talent Matt Ryan has to work with. They cannot afford a road slip-up against an improved Jacksonville team that will get better with each week. Doug Pederson and Frank Reich know each other well from the Super Bowl run in Philadelphia.

This could turn out to be the best game of the day. Lamar Jackson and Tua Tagovailoa were efficient in the opener, and they did that without the support of a trusty running game. The Mike McDaniel hype will be off the charts with a victory here, and there is enough support on the Dolphins roster to do it.

The Rams had a long layoff after the TNF loss to Buffalo, and that should help sort out the options around Matthew Stafford. It can’t just be Cooper Kupp, even against the Falcons, who showed improvement with Marcus Mariota and a young roster.

The 49ers were a dud in Trey Lance’s opener, and Eli Mitchell’s knee injury hurts the running game. Does that mean more Deebo Samuel in the backfield? The Seahawks have won the last four in this NFC West series, including the last three at San Francisco. This isn’t a layup for San Francisco by any means.

This was a virtual pick ‘em before Dak Prescott’s injury, and Cooper Rush is back in the fold as Dallas’ answer at quarterback. The Bengals should bounce back after a disaster Week 1 in which Joe Burrow threw four interceptions. The matchup between Ja’Marr Chase and Trevon Diggs is an interesting subplot, but Cincinnati rolls here.

The new-look Broncos will make their home debut with Russell Wilson against Houston, which played Indianapolis to a tie. Davis Mills impressed for the Texans, but he will be pressed on the road. Houston averaged just 2.7 yards per rushing attempt in Week 1. That won’t cut it against Denver.

The Cardinals and Raiders are  among those playoff teams from last year hoping to avoid the 0-2 start. Both pass defenses were shredded last week, albeit by elite quarterback play. Derek Carr and Kyler Murray should put on a high-scoring show in the afternoon window, but we’ll stick with the home team. Josh McDaniels gets his first victory as Las Vegas coach.

The Packers’ Week 1 loss to the Vikings was reminiscent of last year’s loss to the Saints. There is no reason for panic – unless Justin Fields and new coach Matt Eberflus come to Lambeau Field and force the issue. Packers coach Matt LaFleur is 6-0 against Chicago, and the average margin of victory is 12.5 points per game. It will be less than that, but Aaron Rodgers and a new crew of receivers look better at home.

We picked against Buffalo last week, and judging by how they looked we might not do that the rest of the season. The Titans have won the last two meetings, but those were home games. The Bills did lose three home games last season, but this won’t be one of them. Tennessee will be off to a shocking 0-2 start.

This is a legit Monday Night Football matchup between two teams trying to shake up the NFC playoff picture. Justin Jefferson (184 yards) and A.J. Brown (155 yards) had the best receiving outputs in Week 1. Ultimately, the Vikings pass rush will irritate Jalen Hurts enough to force a few turnovers, and Kirk Cousins continues to thrive in first-year coach Kevin O’Connell’s offense.