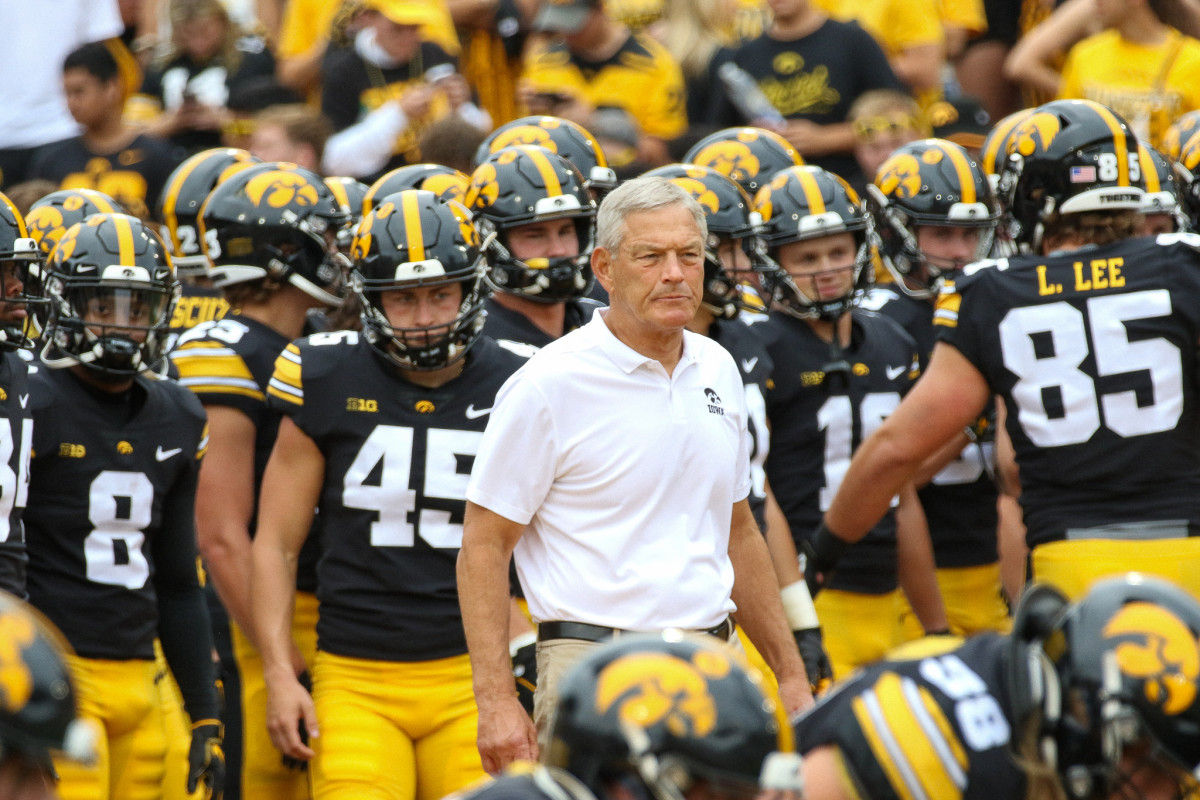 IOWA CITY, Iowa – Maybe it was the rumbling from the eastbound Iowa Interstate train that was passing the Iowa football building that prompted coach Kirk Ferentz to make a railroad reference on why the Hawkeyes will start quarterback Spencer Petras in Saturday’s game against Nevada at Kinnick Stadium.

“We’re not trying to drive this train off the road by any stretch,” Ferentz said Tuesday. “It’s not an intentional derailment.”

Iowa’s offense has been a slow-moving freight train in the first two weeks of the season, lumbering along with limited cargo. The Hawkeyes (1-1) have just one field goal and one touchdown, and at just 316 yards in the first two games of the season look like a short-line railroad instead of a transcontinental express.

Petras, who is 23-of-51 passing for 201 yards and two touchdowns, has been the biggest target of criticism, and Ferentz left open the possibility for a change to backup Alex Padilla for this week.

Instead, it’s Petras at No. 1 on the depth chart, and Ferentz having to answer why on Tuesday.

“I go back to body of work,” Ferentz said. “This kind of ties into some other topics, but we were 0-2 at the start of the ’20 season and then we won 12 straight with (Petras) at quarterback. He built up some credit right there, and I thought he played really well. Not in each and every game, but he did a pretty good job and led our football team. He’s got a good resumé going.”

Asked on Tuesday morning if he was going to be the starter, Petras seemed to be taken aback at the question.

“Yeah. I … yeah, I assume so. It’s business as usual within our building,” Petras said.

Petras knows the criticism of his play is out there, and he knows he has had his issues. But he’s avoiding whatever is being said.

“I’m kind of a hermit,” Petras said. “I’m not listening to anything. I’m not reading anything. It comes with the territory, though.

“When you play quarterback, you sign up for it all. You don’t just get to sign up for scoring 50 points and throwing five touchdowns. If I could, I would. But you don’t get to do that. This is the game I love, this is the position I love, this is the team I love. And unfortunately there’s going to be hard games. But none of that means anything for this week.”

Petras said he saw improvement in the offense, considering the Hawkeyes had just 150 yards of offense compared to 166 in the season-opening 7-3 win over South Dakota State.

“The thing that I think is hard for people who aren’t in the building, or never competed at this level, to understand is there’s a process to it all,” Petras said. “And always have trust in the process, respect for the process, and understand that we’re going to look a lot better in Week 12 than Week 1, and we’re going to look better in Week 3 than Week 2. You have to continue to improve. The only time we’re not doing our job is if we’re not improving.”

Petras’ teammates came to the defense of him and Iowa’s offense.

“It’s a team game,” cornerback Riley Moss said. “We allowed a touchdown. If they didn’t score a touchdown, and we don’t allow any points, we win the game. It goes that way, too. It’s a team sport, a team effort. When you start getting into, ‘It’s this person’s fault, it’s that person’s fault,’ the team divides, and we are a lot worse team because of that.”

“The goal this week,” running back Gavin Williams said, ‘is to get out of our own way and play ball.”

Ferentz acknowledged that the Hawkeyes have had their share of injuries on offense. Wide receivers Keagan Johnson and Nico Ragaini, expected to be starters this season, haven’t played. Running back Gavin Williams didn’t play in the season opener and only had two carries on Saturday, but is expected to be at full strength on Saturday. Offensive line shuffling has also been an issue.

“When we feel with this team that we have a chance to really assess things fairly, then we’ll make the judgments we feel necessary,” Ferentz said. “And hopefully that’s coming soon.”

For now, Petras is still the engineer.

“I operate the same as I do every week,” he said. “I think you guys make a big deal about that thing, that situation. I haven’t focused on that one bit. I’ve focused on improving, and playing my best football Saturday.”