Why nine teams passed on Patrick Mahomes in the 2017 NFL Draft, opening door for Chiefs to get a star QB 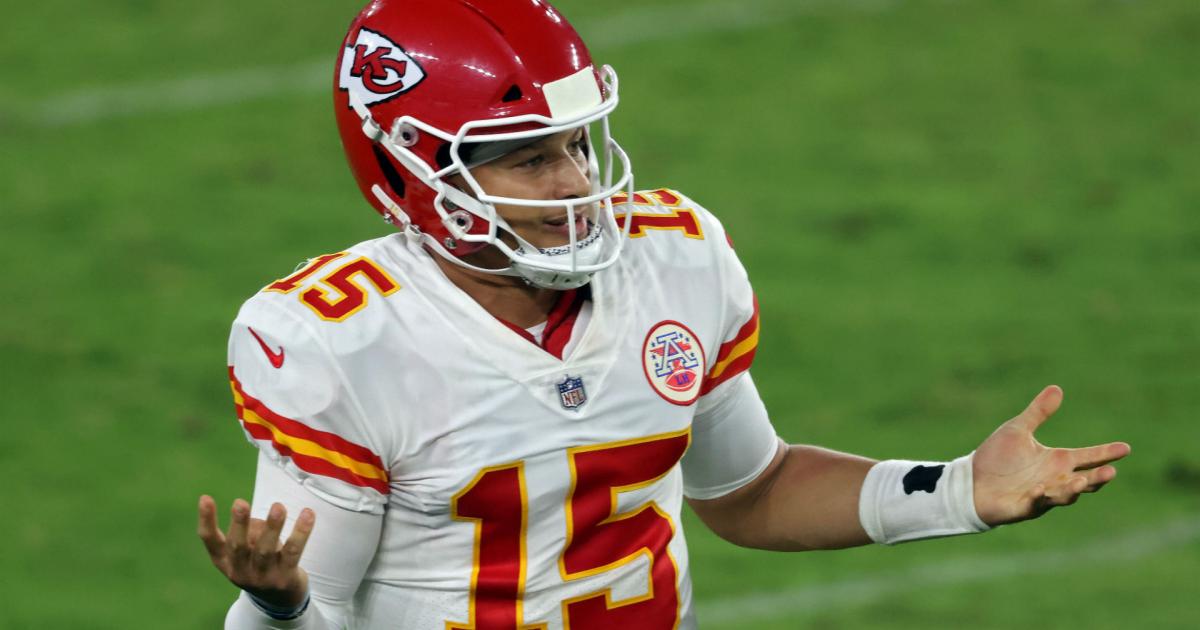 The 2017 NFL Draft class wasn’t considered to be particularly strong at quarterback when it first occurred. Five years later, it is now known for producing one of the best signal-callers in the NFL.

Yes, Patrick Mahomes was one of the three quarterbacks taken in the first round of the 2017 NFL Draft. Not much was made of the selection at the time, as it was made out to be a boom-or-bust pick by the Chiefs as they hunted for a successor to Alex Smith.

Mahomes has become one of the NFL’s best QBs and has already appeared in two Super Bowls in four full years as a starter. He won one of them and also took home the NFL MVP award for 2018 after he threw for 5,097 yards and 50 touchdowns in his first full season as a starter.

Mahomes has been an excellent pro, and in retrospect, it is shocking that he lasted until the 10th pick in the 2017 draft. How did Mahomes last that long, and why? Here’s a look at the nine players who were selected before him as well as a scouting report on him from the time he was drafted.

NFL PICKS WEEK 2: Straight up | Against the spread

Mahomes was considered to be one of the best quarterback prospects in the 2017 NFL Draft class, but he never really got much buzz as the potential No. 1 overall pick. Instead, he largely found himself behind Mitch Trubisky in mock draft rankings, though many were enamored with his skill set.

Mahomes showed off a massive arm during his college days at Texas Tech and he was one of the most productive quarterbacks in the country. He threw for 5,052 yards and 41 touchdowns during his last season with the Red Raiders before going pro.

Some questioned whether Mahomes’ production a product of Texas Tech’s Air Raid offense. They also wondered how he would perform in a pro-style offense at the next level and whether his shot-taking, gunslinger mentality would cause him to be turnover-prone at the next level.

Still, he had everything teams were looking for in a quarterback. That included solid size at 6-3, the biggest arm in that draft class and plus mobility that allowed him to make plays on the move.

NFL.com’s Lance Zierlein called Mahomes a “high ceiling, low floor prospect” in his scouting report ahead of the 2017 draft.

Mahomes is a big, confident quarterback who brings a variety of physical tools to the party, but he’s developed some bad habits and doesn’t have a very repeatable process as a passer. Mahomes’ ability to improvise and extend plays can lead to big plays for his offense, but he will have to prove he can operate with better anticipation and be willing to take what the defense gives him in order to win from the pocket. Mahomes will be a work in progress, but he’s a high ceiling, low floor prospect.

Zierlein’s report wasn’t far off on Mahomes, but his pro-player comparison undersold him a bit. He compared Mahomes to former Bears and Broncos quarterback Jay Cutler.

Given that comparison, Mahomes has vastly exceeded his expectations through five full NFL seasons.

There were nine total players selected in front of Mahomes during the 2017 NFL Draft. That included one quarterback, who went eight spots ahead of the future MVP at No. 2 overall.

Here’s a rundown of the players that went ahead of Mahomes before the Chiefs traded up to the No. 10 overall spot to select him.

No. 1, DE Myles Garrett, Browns. The Browns needed a quarterback, but the 2017 NFL Draft was considered to be weak at the position. As such, Cleveland took the best player on the board in Myles Garrett and strengthened its pass rush.

Garrett has been a force for the Browns, racking up 58.5 sacks and two All-Pro first-team appearances in his first five seasons. The Browns would probably take Mahomes if they could have a do-over, but they can’t complain too much; they still landed one of the best players in the draft as a whole.

No. 2, QB Mitch Trubisky, Bears. It elicits universal groans when people are reminded that Trubisky was selected ahead of not only Mahomes, but also Deshaun Watson in the 2017 NFL Draft. The North Carolina product was considered the safest quarterback of the group and was thought to have Matthew Stafford-like upside, according to NFL.com’s Lance Zierlein.

Trubisky posted a 29-21 record with the Bears, but he was an average starter at best. He completed 64 percent of his passes for 3,536 yards, 21 touchdowns and 12 interceptions per 17 games played before joining the Bills as a backup. Now he’s starting for the Steelers as he looks to resurrect his career.

No. 3, DE Solomon Thomas, 49ers. The good news is that the 49ers traded down one spot with the Bears in order to select Thomas. The bad news is that the No. 3 overall pick turned out to be a bust, as he has racked up just 9.5 career sacks in five NFL seasons.

Thomas is still in the NFL, but he’s already on his third team, the Jets, after things didn’t work out in San Francisco and Las Vegas. The 49ers could have done much better here.

No. 4, RB Leonard Fournette, Jaguars. Fournette logged two 1,000-yard seasons in his three years with the Jaguars, but he averaged just 4 yards per carry in Jacksonville. Eventually, they moved on from him and he found new life in Tampa Bay as the top running back behind Tom Brady.

Fournette won a Super Bowl with the Buccaneers in 2020 and had 1,266 scrimmage yards and tied a career-high with 10 touchdowns during his second year with the team. He is certainly more than a serviceable option at running back even if he isn’t among the league’s best at the position.

No. 5, WR Corey Davis, Titans. The Titans were in desperate need of receiver help when they selected Davis here. Before they chose the Western Michigan product, Rishard Matthews, Kendall Wright, Tajae Sharpe and Harry Douglas were their top receivers. Davis was supposed to make that a non-issue.

Davis became a serviceable player for the Titans. He never topped 1,000 yards or five touchdowns in a season despite his 6-3 frame. He still earned a solid contract with the Jets as a free agent, but he has continued to be just a mediocre starter

No. 6, S Jamal Adams, Jets. Adams looked like the best player in this draft class for a while. He was a weapon in the box and initially had nice coverage skills that allowed him to be one of the game’s best-rounded safeties. He was named an AP All-Pro during his second season after recording 115 tackles, three forced fumbles and an interception.

The Jets traded Adams to Seattle before the 2020 season and it turned out to be a good move. His coverage skills have waned with the Seahawks and he has been more of a traditional box safety as a result. His pass-rushing skills are still solid, as he had 9.5 sacks in 2020.

However, Adams had none in 2021 and is set to miss time in 2022 after suffering a calf injury. So, it appears that his decline is continuing despite the fact that he was just 26 at the start of the NFL season.

No. 7, WR Mike Williams, Chargers. Williams didn’t make a big impact in his first NFL season but since then, he has become a steady receiver for the Chargers. He had 10 touchdowns during his second season and he has logged two 1,000-yard seasons during his career.

Williams inked a three-year extension worth $60 million with the Chargers during the 2022 NFL offseason. Clearly, they believe he is one of the NFL’s best receiving weapons thanks to his downfield playmaking ability and 6-4 size.

No. 8, RB Christian McCaffrey, Panthers. McCaffrey was the second running back drafted in 2017, but he has been the best of the bunch. The Panthers star has had trouble staying healthy the last two seasons, but in 2019, he had an All-Pro year during which he totaled 403 touches, 2,392 yards and 19 touchdowns. All were career highs and led the NFL.

When he is healthy, McCaffrey is arguably the NFL’s best running back. The problem is he played in just 10 games during 2020 and 2021 combined. He could re-establish himself in 2022 but will need to stay on the field to do so.

No. 9, WR John Ross, Bengals. Ross is arguably the biggest bust among the top 10 picks. He set his draft stock ablaze at the NFL Combine when he ran a record-breaking 4.22-second 40-yard dash. That type of speed was appealing to the Bengals, who selected him with the No. 9 pick.

Ross never did much during his five-year NFL career. He caught 62 passes for 957 yards and 11 touchdowns, but he never had more than 506 yards in a single season. He is out of the NFL now at age 26; it’s unclear whether his speed will give him another chance at the sport’s highest level.

Below is a full look at the first round of the 2022 NFL Draft with the quarterback selections bolded:

MORE: Patrick Mahomes’ elite outing against the Cardinals, by the numbers

The Chiefs made a major move to land Mahomes. They were originally armed with the 27th pick in the first round of the 2017 NFL Draft, but the Bills agreed to send them the 10th overall selection in exchange for the 27th pick, a third-round selection that year and a first-round pick in 2018.

The moves worked out well for both teams. The Chiefs landed Mahomes while the Bills were able to get Tre’Davious White, one of the NFL’s best cornerbacks, with the 27th pick they acquired from the Chiefs. They were then able to parlay their multiple first-round picks in the 2018 NFL Draft into a trade-up to land Josh Allen.

That said, Mahomes very nearly ended up on a different team. If not for the Chiefs-Bills trade, the Saints would have snapped up the quarterback, who had a fan in head coach Sean Payton.

“He was the best I ever evaluated coming out of college. And there’s a gap between the next one,” Payton said of Mahomes to Fox Sports’ Colin Cowherd. “He’s that good.”

What about Mahomes was so impressive? Payton identified that he had a cannon arm and was able to still make tough throws and get power behind the ball while on the move.

He was outstanding. Then we go out on the field, we throw, we work out, you know it’s windy out there … He reminded me of Favre. He had that — not just gunslinger — but he could torque his body and he could create speed on the ball without the feet having to be set or perfectly set.

So, the Saints were just one pick away from landing Mahomes. Instead, they got Marshon Lattimore, a player with whom Payton was very pleased.

Still, if not for the trade, Mahomes could have been Drew Brees’ successor instead of Alex Smith’s. That certainly would have been an entertaining transition to watch.