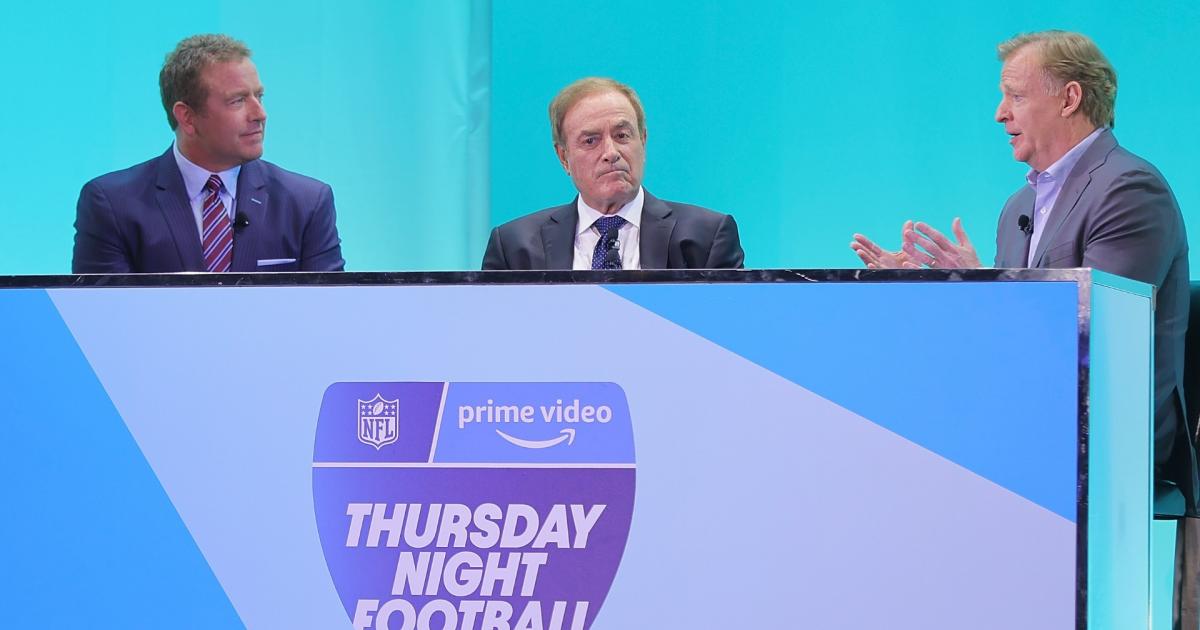 “Thursday Night Football” used to be the NFL’s least compelling series of night games. That’s no longer the case after the regular-season streaming-only debut on Amazon in Week 2.

Al Michaels and Kirk Herbstreit have given Amazon’s announcing booth unique gravitas, blending the best-ever NFL prime-time play-by-play man with the best current college football color commentator. It may not be the most traditional expensive combination, but the informed insight stacks up with what NBC now has without Michaels with Mike Tirico and Cris Collinsworth and Herbstreit’s other network, ESPN, has with Joe Buck and Troy Aikman.

The smart and savvy pregame and halftime

There’s a reason photogenic Fox veterans Charissa Thompson and Tony Gonzalez are on the left side of the desk. Their experience in presentation is a great balance to newcomers Ryan Fitzpatrick, Andrew Whitworth and Richard Sherman. It doesn’t take a Harvard or Stanford education to know those four former NFL players are four of the most intelligent modern players.

Fitzpatrick and Sherman have different personalities but mesh well together on the right side with the venerable Whitworth in between. They all provide articulate commentary with some humor but no hot takes. The only regret is that Aqib Talib, due to personal reasons, couldn’t bring his fresh spin to the set.

The big-game opening and majestic music

Back in the day, the late Pat Summerall was the best at setting the stage for big NFL games on CBS. Michaels, when “MNF” was an ABC fixture, had that kind of support in hyping games from the late Frank Gifford.

From setting the stage to Kansas City to the part-animated titles to introduce the game itself, there was justice done for the exciting spectacle to come featuring AFC West Super Bowl contenders with elite quarterbacks.

John Williams’ iconic “SNF” theme for NBC has the appropriate tinges of “Star Wars” and “Indiana Jones.” Amazon wisely went for that same feel of scoring an epic motion picture with Pinar Toprak. “TNF” needed that killer soundtrack to go from early-week NFL appetizer to a true main event.

The return of a underrated reporting star

Kaylee Hartung is not the average sideline reporter. She excelled on ESPN college football duties at one time, but also was able to cross over and do excellent work on Scripps Spelling Bee telecasts. Amazon made a great move to bring her back into sports after newsy stints with CNN and ABC.

Michaels and Herbstreit couldn’t have asked for better seasoned support and Hartung ensures the quality on the field matches what is upstairs.

The ease and availability of Amazon

Anyone still stuck in traditional broadcast ways may not like it, but Roger Goodell and the NFL had to take the next step to start delivering national games OTT. For those familiar with Prime Video, it was hard to miss the big banner that made the game just a click away.

It’s also helpful that Amazon offers DVR controls to allow viewers to pause and record the game to watch at their own pace. “TNF” has everything every other NFL prime-time broadcast has, just specific to one platform. In an era where everyone scrambles to find their game across networks, the one-stop search is a welcome alternative.

The amazing picture quality, even with no 4K

For those who appreciate 1080p — also known as full high definition — were rewarded with a crystal-clear streaming experience. The camera work and production value were clean and bright, helped by the right mix of vibrant colors from the Chiefs and Chargers’ uniforms. The graphics also were easy to grasp without overwhelming data.

Amazon is working to get on the level of other platforms in terms of consistent high-quality dramatic programming across the board. The ultra-violent “The Boys” has been the dominant force of late for Prime Video but now it has powerful more family-friendly blockbuster “The Lord of the Rings: Rings of Power”.

In terms of unscripted live reality show, nothing is cooking as well as the NFL in 2022. Amazon needed it to become more compete and compete with the more established entertainment-first streaming services. The NFL needed Amazon, took, to expand its unparalleled American sports brand. Ultimately, the biggest winners of “Thursday Night Football” leveling up are the consumers who can’t get enough of the league’s top action.