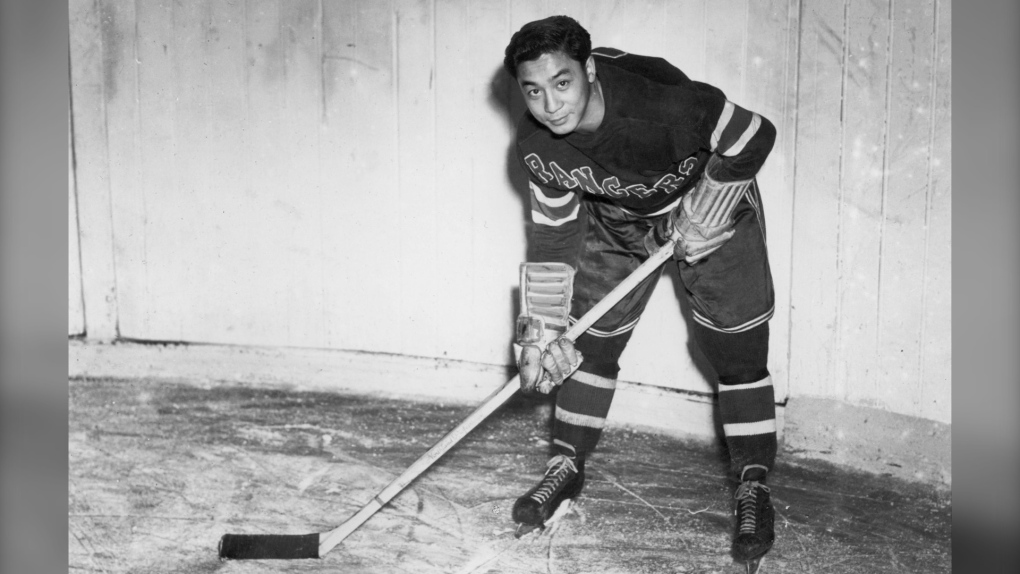 Larry Kwong only played one shift in the NHL nearly 75 years ago. But supporters have launched a campaign to have him considered for induction into the Hockey Hall of Fame.

When Kwong laced up for the New York Rangers on March 13, 1948, he made history, becoming the first person of colour to play in an NHL game.

“Larry broke the colour barrier, if only for a minute. But that was such a monumental achievement given everything that was against him,” said Vernon teacher Chad Soon, who first learned about Kwong’s story from his grandfather, and later met the man himself and brought him to his school to speak to students.

Kwong was born in Vernon, and the talented forward faced rampant discrimination against Asian Canadians as he tried to pursue a hockey career in the late 1940s.

At age 23, Kwong was eventually signed by the Rangers and assigned to the farm team.

“He leads the team in scoring in his second year, but has to watch as player after player with inferior stats with inferior ability gets the call up to the big team instead of him,” said Soon, who added Kwong drew huge crowds as a farm team player in New York.

Bowing to public pressure, the Rangers finally called up Kwong for a single NHL game in Montreal in 1948. He was benched for the first and second periods, and only played one shift late in the third before being sent back to the farm.

“He realizes in that moment the Rangers are not interested in bringing diversity into the game,” Soon said. Kwong then signed with the Quebec league, where he won scoring titles and was named MVP.

“Normally, that would be a ticket to the NHL. But for Larry it wasn’t. None of the teams were interested in a Chinese player,” said Soon. “This is 10 years before Willie O’Ree would enter the league as the first Black player. So Larry used to joke he was born a little too soon.”

Kwong was born in Vernon, and the talented forward faced rampant discrimination against Asian Canadians as he tried to pursue a hockey career in the late 1940s.

Kwong’s struggle to overcome racism in hockey has been an inspiration for Moezine Hasham, the founder of Hockey 4 Youth.

“It’s not that he wasn’t a good player, it’s just unfortunately discrimination was there that held him back,” said Hasham. “When it comes to hockey, it’s so critically important we need to be able to amplify his story, share his story.“

Hasham says inducting Kwong into the Hockey Hall of Fame in the builder category is the best way to do that.

“These are stories that the hockey world needs to celebrate more, we need to shine a light on it more,” he said.

And supporters believe 2023 would be a fitting year to celebrate Kwong.

“What’s remarkable about next year is it would be the 75th anniversary of him breaking into the league, and also would have been his 100th birthday in 2023. So, I think the storyline is there. I think now is all the heavy lifting and hard work,” Hasham said.

Christopher Woo has created a petition to gather signatures for the Hall of Fame effort.

“The more signatures we get, the more it will get noticed by someone at the Hockey Fall of Fame or the committee members,” said Woo.

A hockey player himself, he can’t imagine the kind of racism Kwong must have faced trying to play the sport he loved.

“I know for me even growing up in the ’90s it was difficult. I was called everything under the sun,” said Woo. “I think hockey has gotten more inclusive over the years, and telling Larry’s story, showing the perseverance, is another stop towards raising diversity within hockey.”

Soon is hopeful the Hall of Fame campaign will be successful.

“I think it’s time,” he said. “His story is one we need to hold dear and keep, because it’s such an inspiring story. His induction into the hall will guarantee it’s not forgotten.”