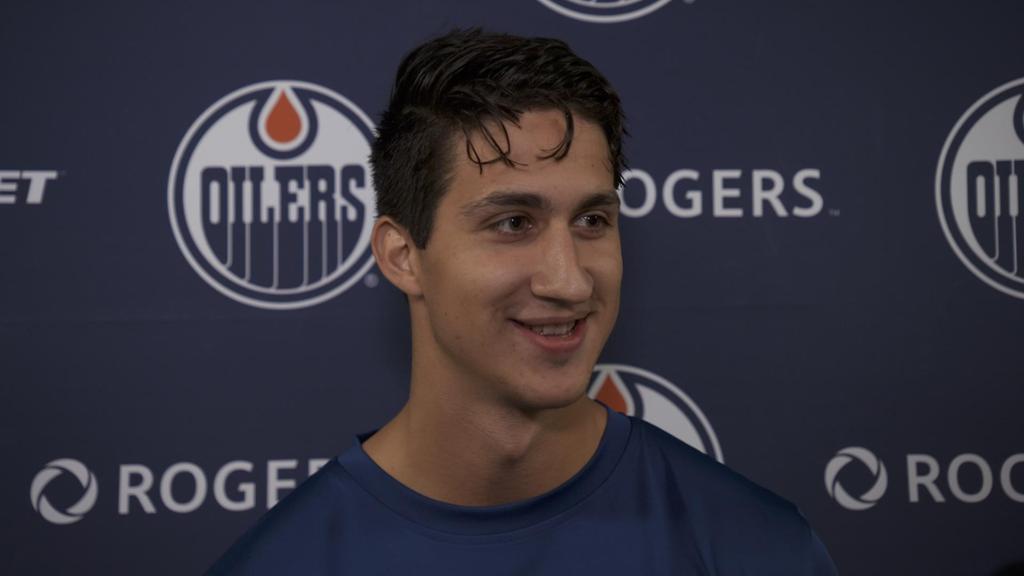 PENTICTON, BC – Defenceman Max Wanner knows there’s a bit of luck involved when it comes to getting your foot in the door of a National Hockey League organization, but it only gets you so far.

Reaching the pro levels of the Edmonton Oilers, either this season or in seasons to come, is going to take a lot more than just good luck.

“I was pretty fortunate,” he said. “I had some lucky bounces for sure, but at the end of the day, it comes down to your work ethic and how hard you work.”

The Estevan, SK product feels lucky just to have the opportunity to share the ice and off-ice activities with fellow Oilers prospects in Penticton this weekend for Rookie Camp and the Young Stars Classic tournament, where they’ll go toe-to-toe with the top rookies of the Winnipeg Jets, Calgary Flames and Vancouver Canucks in hopes of meshing with the organization and earning an invite to Oilers Main Camp next week.

“Obviously it’s a very exciting opportunity,” Wanner said. “There are a lot of nerves going on, but due to COVID the last few years we weren’t able to do this. It’s just really exciting to come out here and finally play the other teams’ prospects and see how you stack up against everyone.”

But luck is far from the reason why Wanner’s stock has been steadily rising.

The 6-foot-3, 185-pound right shot is a blueliner who puts his priorities on defending and hopes to model his game in the coming seasons around a former Oilers stay-at-home defender.

“I would say I play a similar game to Adam Larsson,” he said. “He used to play here and I try to play a two-way game, but I do play defence first and try to play a hard-nosed game. Hopefully that’s something to look forward to.”

Wanner is the latest draft pick in attendance at this year’s Rookie Camp after being selected in the seventh round, 212th overall at the 2021 NHL Draft from the WHL’s Moose Jaw Warriors in a year that saw him start the campaign at the U18 AAA level before joining the Warriors in the WHL bubble for 17 games and recording four assists.

Wanner’s first opportunity in the bubble upped the standard, both in the quality of opposition and potential expectations, for what it will take for him to reach the next level.

“You start off in Midget AAA, you’re playing 15-to-16 year-olds, and then we got into the bubble that year and you don’t really know what to expect,” he said. “You’re going in blind to that sort of thing, and then I just played my game and things just kind of worked out.”

Wanner did enough to impress the Oilers scouting staff despite the challenges of a shortened season and earn himself a late selection in the 2021 Draft. After his first full season with Moose Jaw this past season, Oilers management is feeling like they found a prospect who could outperform his seventh-round selection and become an important defenceman for this club moving forward.

The 19-year-old stepped into his first Main Camp the September following his drafting by the Oilers where he saw firsthand the work and commitment needed to be a full-time NHL player.

“I like to say it’s twice the learning rate when you’re playing at a pro camp as it is in junior, and it’s super true. You’ve got to be like a sponge and just absorb as much as you can.”

Wanner earned continuity in the Moose Jaw lineup this past WHL season and took advantage of the opportunity by growing his game over the course of campaign, improving defensively and building his offensive numbers as the season progressed after a slow start.

Wanner ended the year with six goals and 17 assists in 55 games before performing in the post-season with a further three goals and four helpers in nine contests.

“I think it was just staying healthy and finally getting opportunities to get into the lineup and have a permanent role,” Wanner said of his growth. “We were playing a full season finally, it wasn’t the 24 games in the bubble, so it was a combination of things that just allowed me to get into a rhythm and a groove and just play my game.”

Just like the steps he took into the WHL bubble, his first full season in Moose Jaw and the glimpse he got of Main Camp, the chance to meet and compete with fellow Oilers prospects in Penticton is another opportunity to get better and learn what will be required to reach the next level.

“The guys up here work so much harder than the guys do in AAA and junior, so it’s all about just wanting more out of yourself and just taking things a day at a time.”