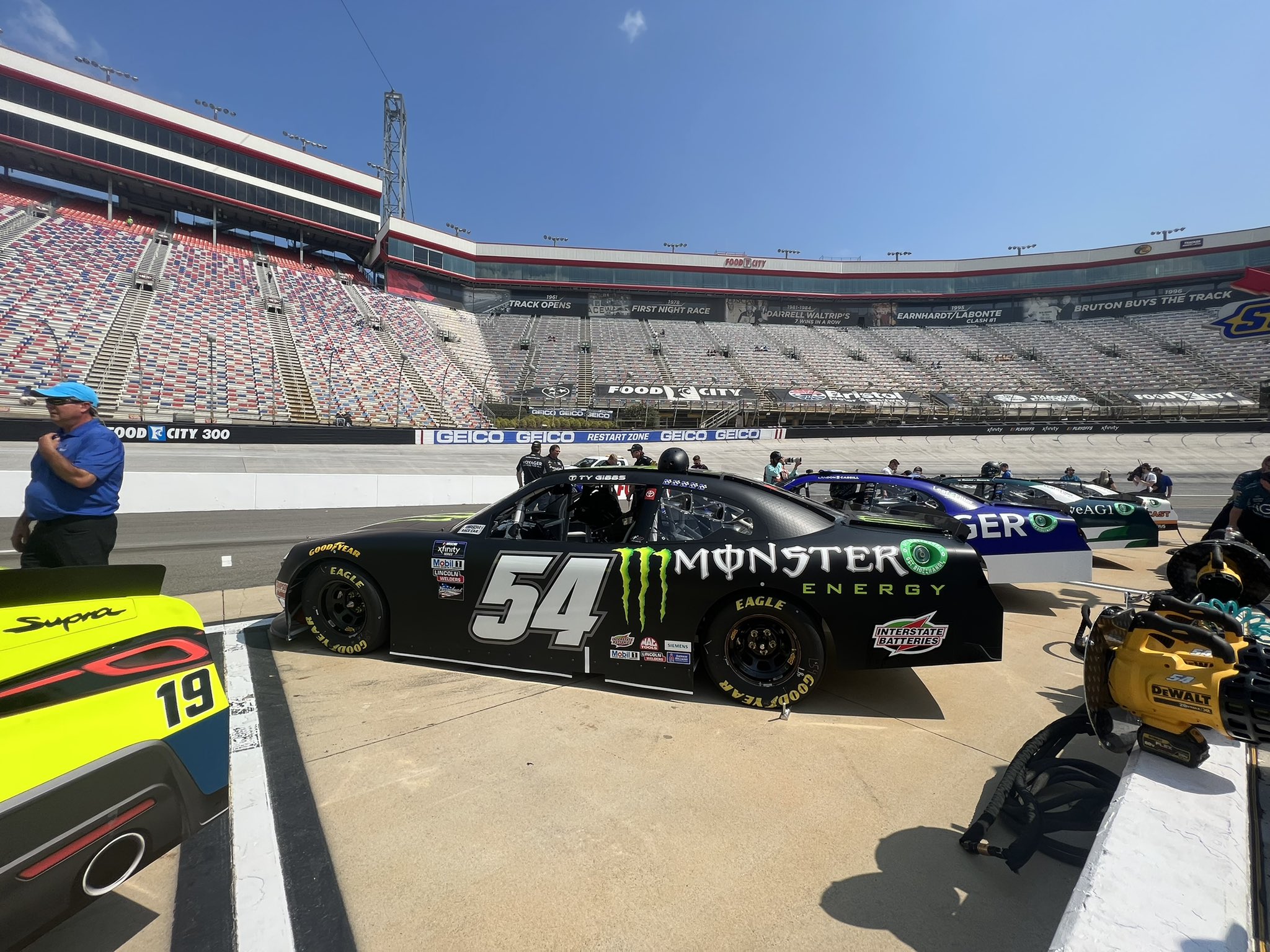 Tonight, the NASCAR Xfinity Series takes the stage in Bristol, Tennessee. The half-mile of Bristol Motor Speedway is set to host the regular-season finale and set the Xfinity playoff grid.

View 2022 Bristol race results for the NASCAR Xfinity Series below.

Ty Gibbs and Josh Berry set the front row. 300 laps of short track racing are up next…

Green flag, Gibbs is clear via the outside lane off turn two. Allmendinger runs wide in turn two and drops from 4th to 8th.

Lap 5, Nick Sanchez has a flat tire and the caution is out.

Green, Gibbs is clear before turn one. Allgaier works inside of Berry to take 2nd away.

Lap 37, Nick Sanchez is around with help and the caution is out.

Sheldon Creed hits the pit lane as he’s been racing one handed and holding up his window net.

Lap 45, Brandon Brown spins off turn two and he slams the inside wall, caution.

Gibbs pits from the lead. Jeffrey Earnhardt and Creed stay out.

Green flag on stage two, Creed gets the jump as Earnhardt spins the tires. Allgaier works to the outside of Gibbs to take 2nd away!

Lap 97, Creed wiggles off turn four and Allgaier works to his inside. They bang doors for the lead. Creed pinches down on him off turn four, Allgaier nearly spins but he holds 2nd.

Lap 108, Landon Cassill hits the pit lane under green with a flat tire.

Lap 125, Creed gets loose on the outside lane. Allgaier clears him via the inside lane and takes over the race lead.

Lap 129, Gragson tags Gibbs in the bumper. Gibbs gets loose, chases it up the banking and slams Creed into the outside wall in the process. The caution is out. Playoff drivers Creed and Gibbs both go behind the wall.

4 to go in stage two, Sam Mayer takes the lap cars three wide. He gets loose under them and goes for a spin from 2nd! The caution is out.

Allgaier leads them to the pit entry and pit exit. Joe Graf Jr and Bayley Currey stay out.

Green, Currey gets the jump as Graf Jr spins the tires. Allgaier works to his inside in turn two and Allgaier retakes the lead into turn three. Noah Gragson drops to 6th as he was trapped behind Graf Jr.

74 to go, Austin Hill is working higher than most in the field. He’s closed to the bumper of Brandon Jones in the battle for 2nd. A lap car blocks Jones and Hill drives right into the back of them as they stack up. They all keep it rolling. Gragson takes 2nd away.

57 to go, Noah Gragson works inside of Jones and takes 2nd away.

30 to go, Gragson has closed to within a car length of Allgaier in the battle for the lead! As Allgaier runs three wide through the middle off turn four he clips JJ Yeley on his inside. Yeley spins to the inside wall, caution.

Gragson stays out. Allgaier and most of the field hits the pit lane.

Pit Penalty: Allgaier will drop to the rear after speeding on the pit lane!

Gragson and Jones line up on the front row.

13 to go, Gragson runs right against the outside wall and he leads Jones by 0.7 seconds.

8 to go, Jones is on the bumper of Gragson in the battle for the win.

3 to go, Jones leans on the bumper of Gragson but he can’t work alongside.

Noah Gragson hols him off and wins at Bristol Motor Speedway!