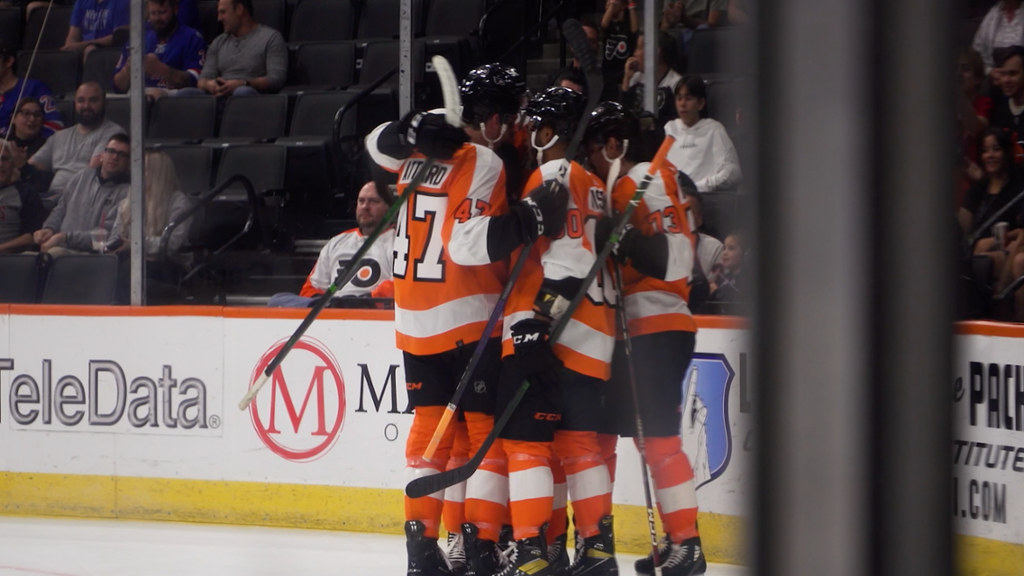 The Philadelphia Flyers prospects swept their two-game Rookie Series with the New York Rangers. One night after claiming a 2-1 overtime win, the Flyers prevailed, 5-1, in the return match at the PPL Center on Saturday evening. A 36-save goaltending performance by Samuel Ersson and a three-point performance by countryman Olle Lycksell (1g, 2a) led the way.

The Flyers were largely outplayed in the first period by they took a 2-0 to intermission courtesy of goaltender Ersson and goals on nice shots by Egor Zamula and Olle Lycksell.

The second period unfolded in much the same fashion. Ersson was by far the busier goalie than his Rangers’ counterparts, and the Flyers were opportunistic when they had a scoring opportunity. A shorthanded goal by Noah Cates and an even strength tally by Zayde Wisdom gave the Flyers four goals on their first nine shots.

Early in the third period, Bobby Trivigno cut the gap to 4-1 on a 3-on-2 counter off a Flyers turnover. Later, Ronnie Attard responded with a power play goal teed up by Lycksell, who collected his third point of the night.

Ersson claimed first-star honors in the game. Lycksell was the second star, with Noah Cates third. At the other end of the ice, Olof Lindbom stopped five of eight shots as the starter in net for the Rangers.Talyn Boyko took over in relief in the middle stages of the second period, yielding two additional goals.

Special teams were an important factor in the victory. The Flyers went 5-for-5 on the penalty kill plus a shorthanded goal. They were 1-for-3 on the power play.

* The Flyers Rookies struggled with breakouts and turnovers in their own zone and the neutral zone — several times in the middle of the ice — for much of the opening 40 minutes. They were bailed out by Ersson as shots were 9-0 (including a quick 8-0 margin) in the first period on the way to a 13-4 difference and an 11-5 scoring chance disparity in the opening period.

* The Flyers scored on their first shot of the game at 13:14 of the first period. A low to high pass from Tyson Foerster found Egor Zamula jumping into the play. From the deep slot, Zamula wired a shot over Lindbom’s glove.

* The Flyers built a 2-0 edge at 18:14 of the first period. Elliot Desnoyners won a left circle faceoff in the offensive zone. Lycksell outworked a defender and quickly sniped a goal over countryman Lindbom.

Tweet from @NHLFlyers: 🚨 BACK TO BACK 🚨Olle Lycksell scores for the second consecutive night and extends our lead. 📺: @NBCSPhilly+ | @SENetworkTV pic.twitter.com/oxT6vrAPaY

* The Ranger had four power play opportunities through two periods. Philly was held to a single shot until they went shorthanded on a holding minor called on Lycksell. The Flyers generated a 2-on-1 shorthanded counter attack. Jackson Cates saucered a pass to brother Noah, who had a tap-in for a 3-0 edge.

Tweet from @NHLFlyers: Brotherly Love at its finest. @JacksonCates5 hooks up @cates_noah with a SHG. pic.twitter.com/1wZ7ttVF6z

* A perfectly executed give-and-go sequence enabled the Flyers to build a 4-0 lead in the second period. Wisdom passed to Desnoyers and went to the net as Desnoyers sent the puck to Lycksell on the boards. Wisdom received a tape-to-tape eturn feed from Lycksell and finished it off.

* Through two periods, Errsson had 24 saves, while the team in front of him generated 10 shots on goal.

* Trivigno made it it 4-1 at 2:06 of the third period on a five-hole goal from the left circle. It appeared to be a stoppable chance. A few minutes later, Ersson stopped a good scoring opportunity for Lauri Pajuniemi. On a 2-on-1 rush for the Rangers with the clubs skating at 4-on-4, Ersson erased a mistake by Zamula with a clutch save on Trivigno. At this point, he had 28 saves on 29 shots.

* Play got a little chippy in the second half of the final stanza. With Lauka Hennault in the box for an iffy hit on Lycksell, the Flyers opened a 5-1 lead. Lycksell teed up a one-timer for Attard from inside the left point and the defenseman simply overpowered goaltender Boyko.

* The Flyers made it 5-for-5 on the penalty kill with an emphatic kill — including a shorthanded chance — on the game’s final penultimate penalty. Philly had a short power play in the game’s final 18.9 seconds.