The Wrap: Coyotes fall to Avalanche in Monday Matinee 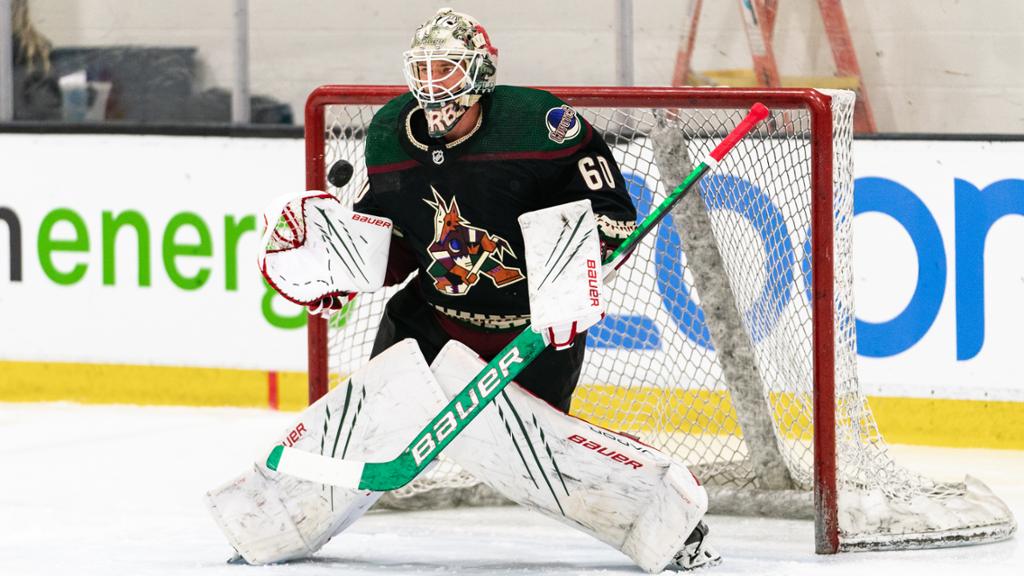 That’s a wrap on the 2022 NHL Rookie Faceoff Tournament.

The Arizona Coyotes dropped their tournament finale 4-0 to the Colorado Avalanche on Monday, unable to generate much offense against Colorado’s prospects. Though neither team scored in the first period, Colorado recorded two goals in both the second and third, giving it more than enough cushion against a Coyotes team that was unable to beat Avalanche netminder Ivan Zhigalov.

That may have been partly due to who was absent from the lineup, as forwards Ben McCartney and Jack McBain did not play on Monday. McCartney, the team captain through the first two games of the tournament, and McBain, an alternate captain, frequently jump-started a young Coyotes lineup with their high-intensity play earlier in the weekend.

Without that spark on Monday, Arizona had a difficult time sustaining any of its momentum.

“Obviously we didn’t play with our identity for most of the game,” said Steve Potvin, who coached the rookies throughout the tournament. “I think we missed some of the guys that were really driving the bus for us the last couple of games.

“The thing is about this game, if you don’t come out with that type of emotion, it’s really difficult to win. Emotion plays a big part of it.”

Tweet from @AZCoyotesPR: ���It���s been a good couple of games to get going before the main camp. It was a fun little weekend.��� Hear from Nate Smith and @RoadrunnersAHL head coach Steve Potvin following today’s 4-0 loss to the Colorado Avalanche in the San Jose Rookie Faceoff tournament. pic.twitter.com/Fvd9XKuAky

In McCartney’s absence, Nathan Smith wore the ‘C’ on his sweater, and he was a consistent bright spot for the Coyotes throughout a physically taxing weekend. Potvin eventually moved Smith onto a line with Conor Geekie and Dylan Guenther in the third period, swapping him with forward Julian Lutz, and the trio generated some of the team’s best opportunities of the game.

Smith said after the game he hopes to carry the momentum created this weekend into NHL training camp, which kicks off this week. He recorded two goals and two assists in 10 games with the Coyotes last season, and after representing the rookies as an alternate captain against the Vegas Golden Knights, he served as the team’s captain on Monday.

It was an honor he didn’t take lightly.

“It just means that much more to try to lead the way for some of the other guys in the room,” he said. “It’s a good first couple games to get going, to get prepared for camp.”

Potvin said he was impressed with Smith in the two games he appeared in.

“We’ve been really happy with him,” he said. “He’s been on the puck, he’s using his body, he’s being very physical, he’s not afraid to get in there on the forecheck, and it’s been a really good start for him.”

McBain made it clear over the first two games that he would be force throughout the tournament, and though he never found the scoresheet, he contributed in just about every other area. The 22-year-old was an alternate captain in the first two games, and Potvin said the 6-foot-3 forward “looks like he’s ready to play in the NHL.”

Former Arizona State captain Colin Theisen wore the ‘A’ on Monday morning in McBain’s absence, and Potvin said he has impressed since making his professional debut with the AHL’s Tucson Roadrunners last season.

Theisen recorded 11 points in 16 games with the Roadrunners last year.

“Theisen, he was coming in as a first-year player last year with us in the American Hockey League, and honestly, it was like he was a five-year vet,” Potvin said. “You could put him in any position on any line, and he’d make that line go.

“He’s progressed really well for us.”

Goalie Déreck Baribeau, who was a late tryout addition to Arizona’s roster, also caught the coach’s eye after allowing just one goal on 20 shots over two appearances.

“Of course you want to see, how did they do?” Potvin said. “For us it’s a little bit of building those connections, and understanding our culture, where we’re headed, and how we want to play.”

The weekend’s tournament is a valuable tool for Arizona’s coaching staff to use for evaluation purposes, especially with the Coyotes’ training camp set to kick off later this week. For those that were able to set themselves apart amongst their fellow rookies, their next task will be to continue that momentum and demonstrate their understanding of the culture the team is trying to build in the desert.

It’s a tall order, but also a necessary one as they chase their dream of playing in the NHL someday.

“The quicker the boys understand it, the better it is,” Potvin said. “I think if they could grow those connections in these types of environments, then it’s really a positive.”