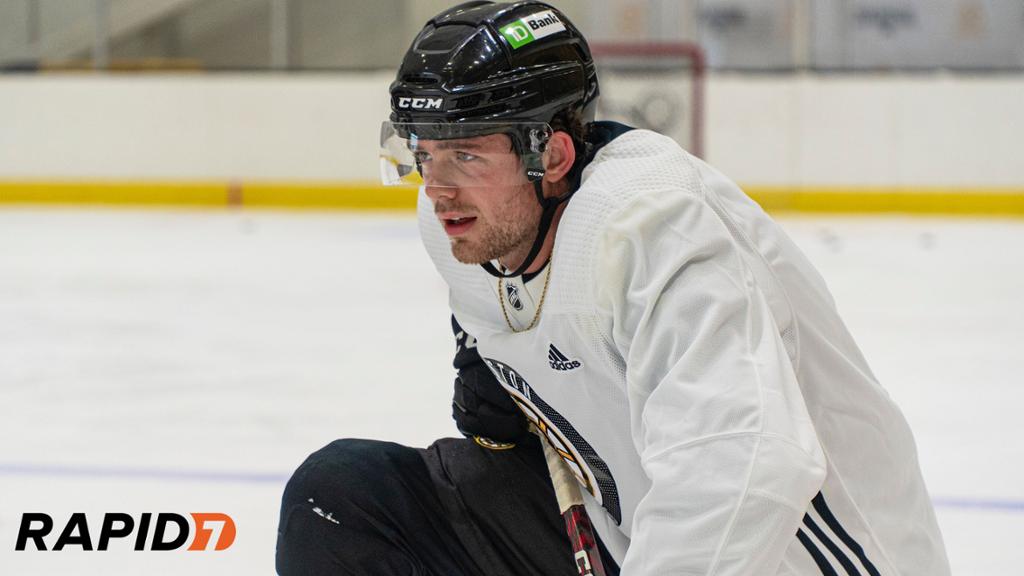 BOSTON – Johnny Beecher isn’t viewing his time at Bruins training as just a way to gain experience. He’s looking at this chance as an opportunity to show he belongs at the NHL level.

“Try to make the team,” Beecher said of his goals the next few weeks. “Just like everybody else here. I said it the other day, it’s a childhood dream of mine to play in the NHL, especially for the Boston Bruins. So, just give it everything I have and hope for the best.”

The 2019 first-round pick is entering his first pro training camp after three years with the University of Michigan and a brief stint with the Providence Bruins last spring. And after finding himself in the shadows of some of Michigan’s other stars, the 21-year-old seems to have freed up his offensive game since arriving in Providence where he notched five points (three goals, two assists) in nine games. He then went on to score in all three Prospects Challenge games in Buffalo last weekend.

“I think it’s definitely huge for every player to see the puck go in the net,” said Beecher. “And coming off last weekend, I think it’s really big to kind of try to carry that momentum into training camp and then hopefully a couple of preseason games.”

Beecher added that over the summer he homed in on developing an “attack mentality” after being a “pass first guy” to this point in his career.

“I’ve talked about it a couple of times throughout the summer just how much I’ve worked on my offensive side of the game and my scoring touch and little things like that,” said Beecher. “I’m only 21 years old, I’m definitely not at the peak my career yet. But I’ve put in a lot of hard work over the last six months. I’m excited to kind of show everybody what I’ve got now.”

Video: Beecher talks with the media on Thursday afternoon

The Elmira, New York, native is also feeling a bit lighter on the ice after dropping around 10-15 pounds since last season. He is s now checking in at around 215.

“Certainly. I mean, I felt in the third game that it was probably the best my legs had felt all weekend, which was a huge positive sign for me,” said Beecher, who worked out with fellow center prospect Jack Studnicka for much of the summer.

“I was a little bit nervous coming off the summer and then playing three [games] in four [days]. But the legs held up really well. And it was a big part for me of why I wanted to drop the weight. I was definitely pleased with that.”

Montgomery noted that he picked up on Beecher’s speed immediately.

“I thought he was really good [on the first day of camp,” he said. “His speed looked really good. I liked the way he attacked middle ice and kicked pucks out and drove to hard ice. It was a really good first day…right now [we’re looking at him as a center] center just because he wins a lot of draws; he won a lot of them in Providence and won a lot of draws in Buffalo.”

Video: Montgomery addresses the media on Friday at WIA