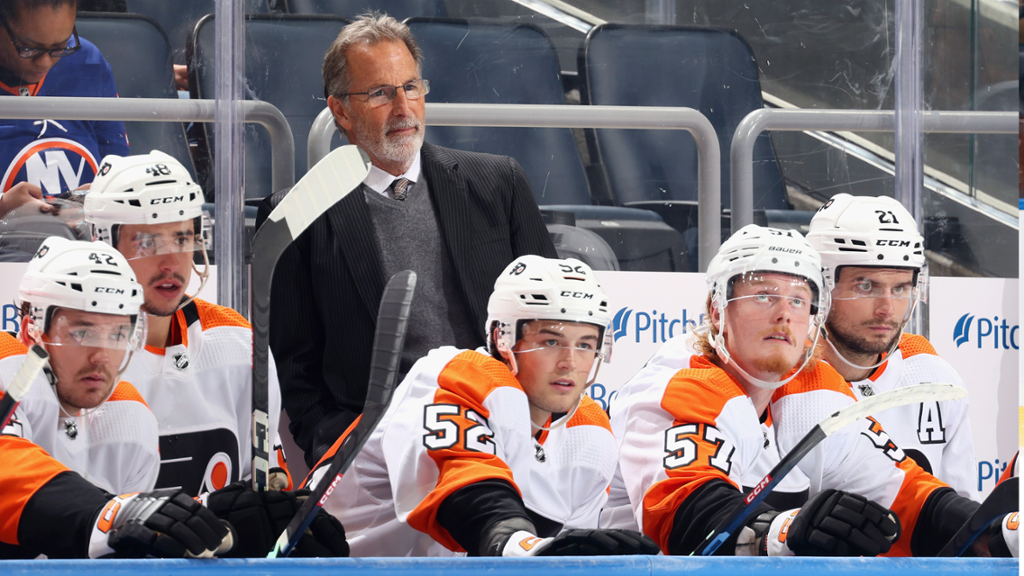 Playing their penultimate game of the preseason, the Flyers lost to the New York Islanders, 2-1, at UBS Arena on Sunday evening. The Flyers, who have only scored a combined five goals in five exhibition games, dropped to 1-4-0. The Islanders improved to 1-2-0.

The first period was scoreless. In the second period, the Flyers and Islanders traded off power play goals by Tony DeAngelo (1st, 5-on-3 PPG) and Kyle Palmieri (1st, 5-on-4 PPG). At 15:18, a point shot by Scott Mayfield (1st) sent the Islanders to the second intermission with a 2-1 lead. There was no further scoring in the third period.

Samuel Ersson went the distance in goal for the Flyers,The young Swedish netminder looked sharp in stopping 21 of 23 shots. Semyon Varlamov played the first two periods for the Islanders, making 16 saves on 17 shots. Jakub Skarek went the rest of the way, stopping all eight shots in faced including chances in the waning seconds of the game for Noah Cates and DeAngelo.

The Flyers went 1-for-5 on the power play. Philly was 3-for-4 on the penalty kill but Mayfield’s 5-on-5 goal came shortly after the expiration of a power play with much the special teams personnel on the ice.

Mayfield’s game-winning goal came during a staccato sequence after a blocked shot and a broken Flyers stick, which widened the lane for him. The bigger turning point was probably New York tying the game at 1-1 on the power play after being held shotless for the first 9:30 of the middle frame. Overall, it was a pretty evenly played game but the Flyers difficulties in putting the puck in the net became evident again.

1. There weren’t many scoring chances for either team in the first period. The Islanders had a slight territorial edge early but the Flyers were the stronger team in the latter part of the period. Noah Cates’ line was Philadelphia’s most effective trio in the opening stanza.Cam York was also noticeable in a positive way in the opening 20 minutes across 11 shifts and 9:37 of ice time. The young defenseman was assertive both on the penalty kill and in the offensive zone.

2. Each team had one unsuccessful power play apiece in the first period. Shots on goal favored the Flyers, 9-7. The Flyers had 20 shot attempts (six were blocked, nine missed the net) while the Islanders had 15 (four blocked, four missed the net). Frost blocked two shots for Philly and had an attempt of his blocked at the other ends. Credited hits favored the Islanders, 7-6.Scott Laughton had two for the Flyers.

3. The Flyers were a step ahead of the Islanders early in the second period as the Islanders got into penalty trouble and were held without a shot on goal until the 9:30 mark. Thereafter, New York made a push.

Philadelphia had a potential 5-on-3 power play for 1:42 as Oliver Wahlstrom took a boarding minor on a hit that angered Nic Desauriers (initially called a major but correctly reduced by the officials at 2:50 and Mayfield was called for cross-checking at 3:09. The Flyers made quick work on the ensuing two-man advantage. Noah Cates won a faceoff and Philadelphia went to work with good puck movement. From behind the net, Frost centered a feed in front to DeAngelo at the right hash marks and the offensive defenseman fired a shot home for a 1-0 lead. The assists went to Frost (three assists on the Flyers first five goals of the preseason) and Tyson Foerster (2nd assist of the preseason). Philly was unable to cash in the remaining 5-on-4.

The Islanders finally registered their first shot of the second period during a delayed penalty drawn by Mathew Barzal on Hayden Hodgson. A Brock Nelson shot attempt bounced around before Kyle Palmieri narrowly beat a desperation dive by Ersson to knot the score at 1-1. Time of the goal was 10:15. The assists were credited to Nelson and Barzal.

New York grabbed a 2-1 lead at 15:19 shortly after the expiration of a Wade Allison tripping penalty. It was sort of a broken play. York blocked a shot. Frost broke his stick. Just having a stepped out on the ice, Mayfield fired a shot from inside the center point that found its way into the net. Alexander Romanov picked up the lone assist.

5. The Flyers had another power play chance in the first half of the final stanza but were unable to tie the game. Philly had some push during a 4-on-4 including Frost finding some space in the offensive zone but firing the puck over the net. Deslauriers blocked a pair of Islanders’ shot attempts. With 4:46 left, Philly got their 5th power play, only for Noah Cates to get nabbed on a high sticking minor at the other end. With Ersson pulled for a 6-on-5 attack late in the third period, Cates was denied on a glorious scoring chance in the final few seconds, followed by DeAngelo nearly scoring just before the clock hit 0.0 and the buzzer sounded.