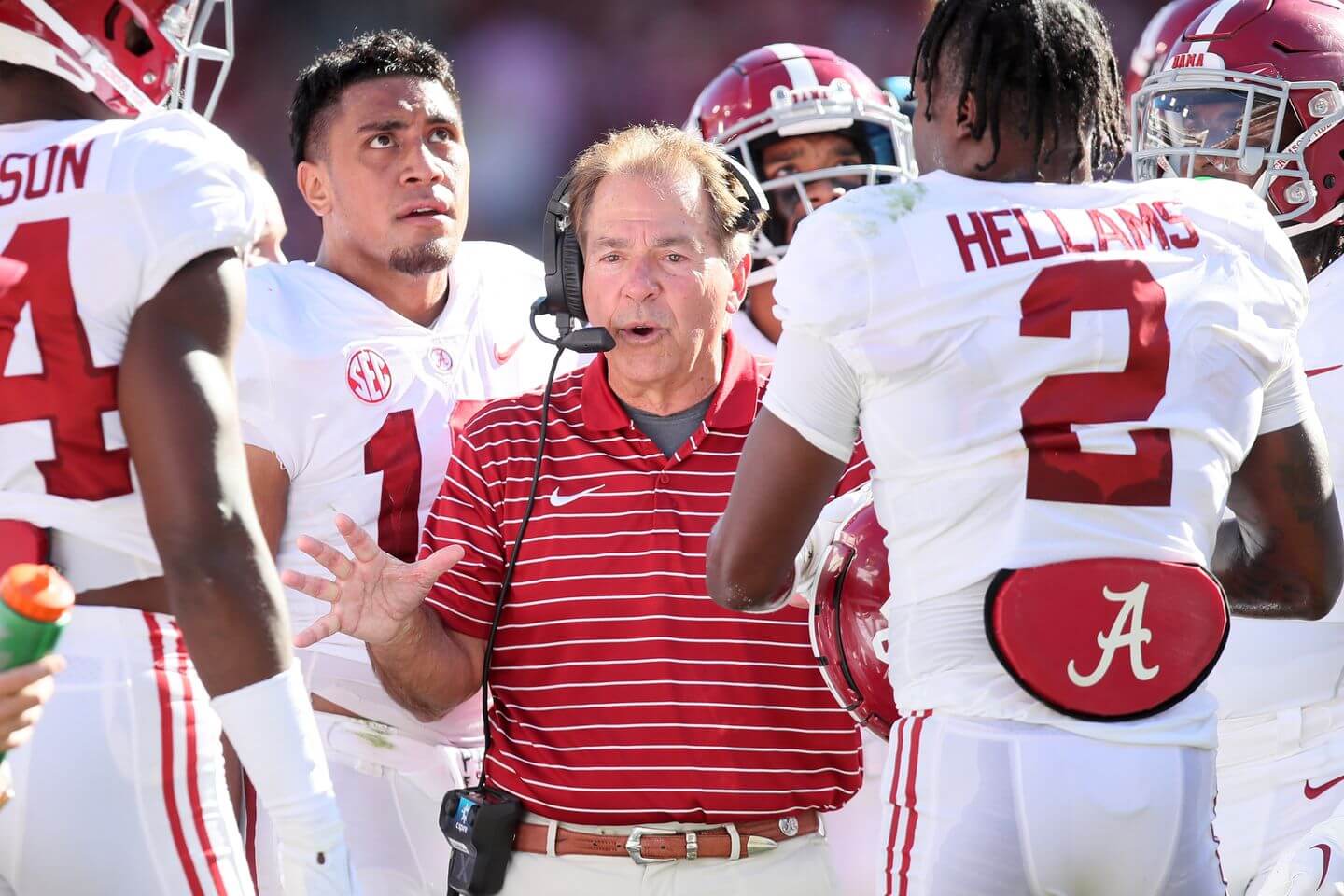 The reality of what was unfolding was clear to Brian Kelly long before he jogged to the locker room that 2013 night in Miami. He got Notre Dame back to the national championship in Year 3, but within minutes, it was understood the Irish weren’t quite ready to win one. It was 28-0 Alabama at halftime, and as ESPN’s Heather Cox asked Kelly what fixes were needed, all he could do was smirk.

“Maybe Alabama doesn’t come back in the second half,” he said without anger. It was just the truth. “It’s all Alabama.”

Miami coach Mario Cristobal still hasn’t named a starting quarterback for Saturday night’s showdown with rival Florida State, but says Tyler Van Dyke has looked good in practice this week as recovers from an injury to his throwing shoulder. Asked if Van Dyke’s arm strength is on par with what it was before he was hurt, Cristobal responded: “Everything that we’ve seen, it looks absolutely normal and strong. So we feel good about it.” Backup Jake Garcia made his first start in a 14-12 win over Virginia last week, but the Hurricanes failed to score a touchdown.

Cristobal said running back Don Chaney Jr. ran in front of the team Tuesday for the time since injuring his knee in camp and the hope is he could return for the final two games of the season.

Brian Kelly says both running back John Emery Jr. and receiver Jack Bech practiced this week and will be able to play against Alabama.

Guard Garrett Dellinger remains day to day as he recovers from knee surgery. He’d likely rotate, not start, if he does play.

In the days after Jim Leonhard unexpectedly took over as Wisconsin’s interim coach following the midseason firing of Paul Chryst, he didn’t have much time to think big picture. It was a Sunday afternoon when Leonhard learned of the change, and the Badgers had a game to play six days later against Northwestern. Leonhard was so buried in the day-to-day operations for the next three weeks of trying to help a reeling group find more consistency that he preached patience with a simple message: Just get me to the idle week. Then, he’d be able to come up for air and more realistically address the future.

Jim Leonhard’s vision for Wisconsin football: ‘I think he’s the man for the job’

The good, bad and ugly of the Buckeyes rushing attack

For the second week in a row, Ohio State failed to establish a consistent rushing attack. The Buckeyes ran for just 98 yards and averaged 3.8 yards per carry in their 44-31 win over Penn State on Saturday.

Ohio State has also posted back-to-back poor performances in gaining yards after contact, with 1.7 against Iowa and 1.95 against Penn State, the two lowest averages of the season. For the season, the Buckeyes are averaging 3.68 yards after contact, the 11th-best rate in the country. Are the recent struggles a trend or an aberration?

The No. 1 defense in the stop rate standings has not changed for a few weeks, but below the top spot, there’s been an awful lot of movement over the past month. This seems like a good time to dig into who’s getting better and who’s getting worse.

Michigan’s defense strengthened its hold on the top spot with a dominant night in a 29-7 rout of Michigan State. The Spartans couldn’t run the ball and couldn’t stay on the field against this crew. They picked up just 11 first downs over 10 drives, and not one of their second-half possessions even lasted two minutes. The Wolverines continue to set the standard for consistent excellence on defense this season and improved their stop rate to 83.5 percent.

Notre Dame-Clemson QB questions and two seasons at a crossroads

The latest installment of Notre Dame-Clemson won’t have the stakes of the past four meetings, at least before kickoff. All four of those games were top-20 matchups, and the most recent three were top-five clashes. No. 4 Clemson (8-0) has started its season similarly to previous Tigers squads, but not exactly the same way, given the quarterback questions surrounding DJ Uiagalelei and Cade Klubnik. Unranked Notre Dame (5-3) has been wildly inconsistent in Marcus Freeman’s debut season, with two top-20 wins, a strong showing against Ohio State and collapses against Marshall and Stanford.

Georgia is going to give up points to Tennessee on Saturday. It was going to happen before Nolan Smith was ruled out and will happen even if Jalen Carter can play more than he did last week. Tennessee’s offense is just too good, and it’s going to score, whether it’s 22 points — the most Georgia has given up this season — or 33 points or even more.

Purdue, Charlie Jones back on Iowa’s radar this week

If beating Northwestern was critical for Iowa’s present, the Hawkeyes’ matchup with Purdue has everything to do with the future.

The Hawkeyes (4-4, 2-3 Big Ten) and Boilermakers (5-3, 3-2 Big Ten) have a history that stretches 92 games since 1910. Purdue once beat Iowa 20 consecutive times from 1961-80, and the Hawkeyes spurned overtures to create a traveling trophy in 2011 when they were paired up as protected foes during the Big Ten’s Legends and Leaders era.

But their series never had the kind of sizzle it does now. From text messages to recruits in the middle of official visits to an All-Big Ten player changing sides, the teams have waged some fierce battles off the field in recent years. And Purdue has delivered some pain to Iowa on the field with four victories in the last five seasons.

Purdue, Charlie Jones back on Iowa’s radar this week

Can Tennessee beat Georgia? Can Dawgs repeat? Are Vols for real?:

Is Tennessee’s leap for real, and has its rocket ship ride in Year 2 under coach Josh Heupel made it a legitimate national title contender?

“Last year’s defense was historic, and they’re not quite on that level, but they’re still really good,” said a coordinator who faced Georgia this year. “They don’t bust coverages. They don’t make mistakes. They just don’t give you anything easy.”

Can Tennessee beat Georgia? Can Dawgs repeat? Are Vols for real?: Coaching confidential

A few weeks back, Virginia Tech instituted a Sunday sprints system as a punishment for players who rack up too many penalty yards during a game. A 40-yard sprint for every yard in penalties was meant to tighten things up.

It’s safe to say that, after last Thursday’s false start fest at NC State, it’s not quite the deterrent the Hokies had hoped.

Virginia Tech (2-6, 1-4 ACC), which hosts Georgia Tech (3-5, 2-3) on Saturday, seems like it’s right where it started on that front after a 13-penalty night against the Wolfpack that included an astonishing 10 false starts.

Iowa’s players generally were good-natured with the questions about facing their former teammates, Charlie Jones and Tyrone Tracy Jr., this weekend at Purdue. But they also deferred to coachspeak when required.

Iowa cornerback Riley Moss, the reigning Big Ten defensive back of the year, regularly defended against Jones in practice. There was quite a bit of trash talk back then, and there could be on Saturday, too, although Moss tried to prevent any bulletin board material. Jones, who was the Big Ten’s return specialist of the year at Iowa in 2021, ranks second nationally with 72 catches and has nine touchdown receptions.

Luke Fickell on if he’s talked to QB Ben Bryant re: outside noise: “If I thought it was something he needed I would sit down with him. Not that all guys don’t like reassurance, but he’s mature beyond his years. To be honest, I think he does a really good job.” #Bearcats

Fickell: “I think sometimes it’s a little bit harder on the other side with Evan (Prater) and not wanting him to get frustrated. I don’t want him to lose confidence in what it is that he’s doing…It’s a part of being able to grow up and mature…” #Bearcats

USC didn’t have its top two wideouts (Jordan Addison and Mario Williams), its All-America LG Andrew Vorhees or its top LB Eric Gentry against Arizona. Here’s where Lincoln Riley stood with injuries as of Tuesday morning …

Lincoln Riley on #USC’s injuries: “My gut feeling is we’ll end up getting a few of them back, maybe not all but very good progress.” He said he couldn’t say if anyone is definitely in or out against Cal right now.

CBs Cam Johnson and Devin Alves are out.

Nebraska QB Casey Thompson remains day to day, interim coach Mickey Joseph says. Thompson is dealing with a nerve injury in his elbow. Not ruled out for Saturday against Minnesota. Thompson did not practice today.

Penn State has to clean up mistakes, won’t announce QB

James Franklin won’t say who the starting QB will be moving forward and said he doesn’t like the question. Whoever gives them the best chance to go 1-0 this week is who will be the quarterback, Franklin said:

Franklin reiterates PSU lost the turnover battle against Ohio State. PSU needs to do a better job kicking and punting too, he adds.

More on Olu Fashanu, PSU’s left tackle who left Saturday’s game with an injury. Franklin wouldn’t get into whether or not Fashanu will play this week. “He’s just so consistent with his approach, his maturity, with his drive toward being elite really in everything that he does. He’s got a chance to be an academic All-American. … He’s strong in the weight room, but he’s got unbelievable play strength.”

Miami QB Tyler Van Dyke is back at practice this week, tight end Will Mallory said Tuesday. Van Dyke missed his first start of the season after injuring his throwing shoulder in a loss to Duke two weeks ago. Jake Garcia started last Saturday against Virginia.

“It’s good to see him back out there progressing and looking good,” Mallory said. “It’s always good to have him out there and doing well especially since it was a scary moment a couple weeks ago. Whoever’s out there on Saturday, we got nothing but the full confidence in them. We’ll roll with it.”

Since 2011, only six Power 5 QBs have averaged equal or more. All six were first-round picks and three went in the top two picks. Three of them won Heismans.