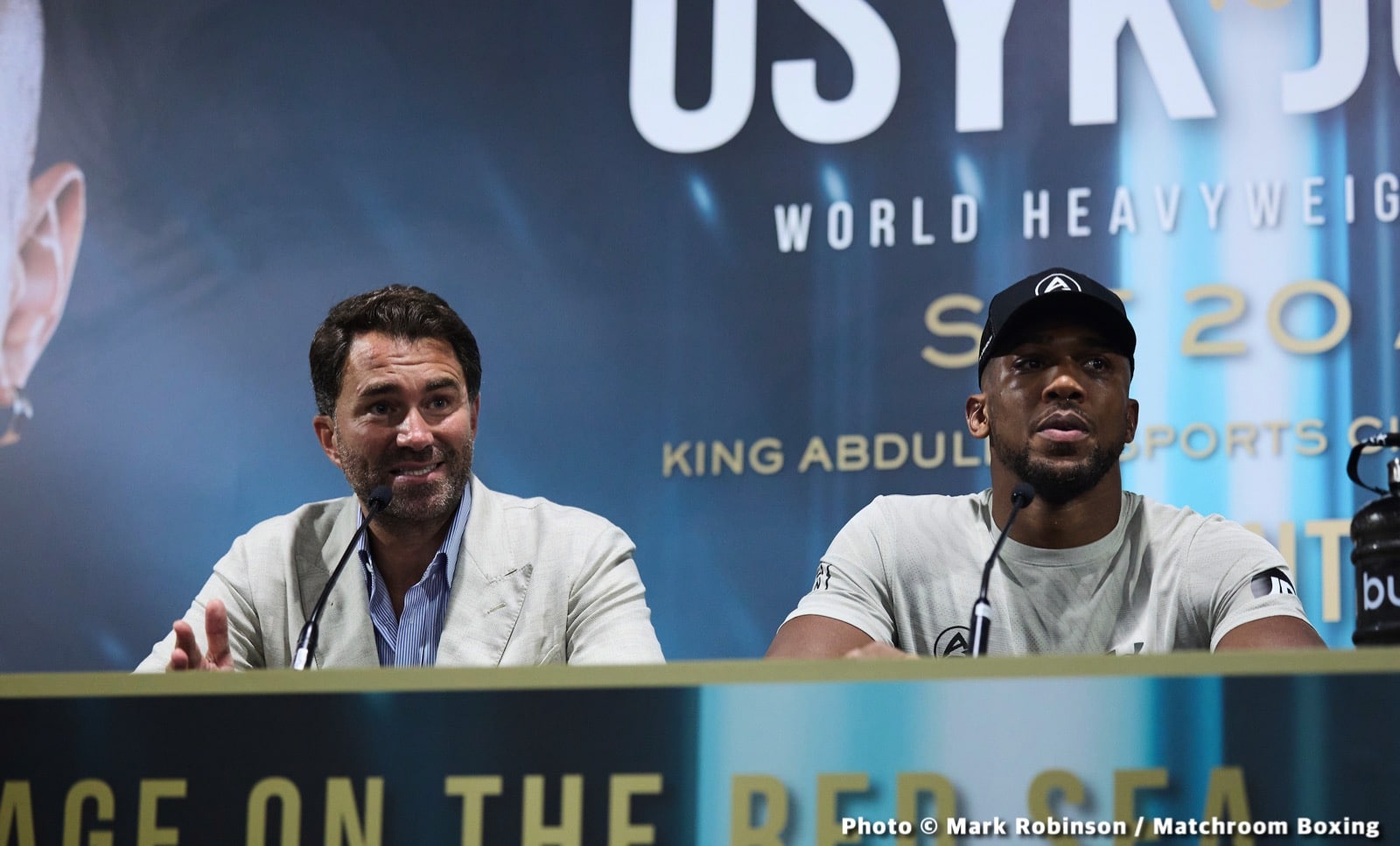 By Barry Holbrook: Eddie Hearn says there’s the potential for Anthony Joshua to face Deontay Wilder straight out of the blocks in the first quarter of 2023.

Hearn has had contact with Shelly Finkel, the co-manager for former WBC heavyweight champion Wilder (43-2-1, 42 KOs), and he’s invited them to Abu Dhabi this Saturday night to discuss putting a fight together with Joshua.

At this point, Hearn isn’t certain if Joshua will fight Wilder first, second or third in 2023. Joshua could take a warmup fight in February if he chooses to return to the ring early next year.

Obviously, Joshua fighting the 34-year-old Whyte wouldn’t do much for the U.S boxing fans because he’s not a big name in the States, and the fans that do know of him remember all too well his sixth round knockout loss to Tyson Fury last April.

The UK boxing fans like the idea of Joshua fighting Whyte, but that fight doesn’t resonate elsewhere.

Wilder redeemed himself in the eyes of many fans with his first round knockout win over Robert Helenius on October 15th, as he looked as good ever.

Going into that fight, Wilder was seen by some people as being past it after his back-to-back knockout losses to Tyson Fury. However, Wilder trimmed down from the 230s to 214 lbs for the Helenius fight, and he looked especially sharp, the best he’d been in many years.

“I invited them out here to Abu Dhabi this week, but I see the Deontay Wilder fight probably being the second fight for Anthony Joshua in all honesty, but he’s up for fighting anyone,” said Eddie Hearn told the DAZN Boxing Show.

It would be admirable if Joshua chose to fight Wilder in his first fight in 2023 rather than a tune-up because he’s lost his last two bouts against Oleksandr Usyk.

“If he waits, he may go straight into that fight,” Hearn said about Wilder potentially being Joshua’s first fight in 2023. “It all depends on when he returns.

“If he returns early in the year, he’ll fight someone else first, and if not, he’ll go straight into the Whyte or Wilder fight.”

“If he waits until April or May, he may go straight into the Dillian Whyte fight; if he fights in February, he may have a warm-up fight.”