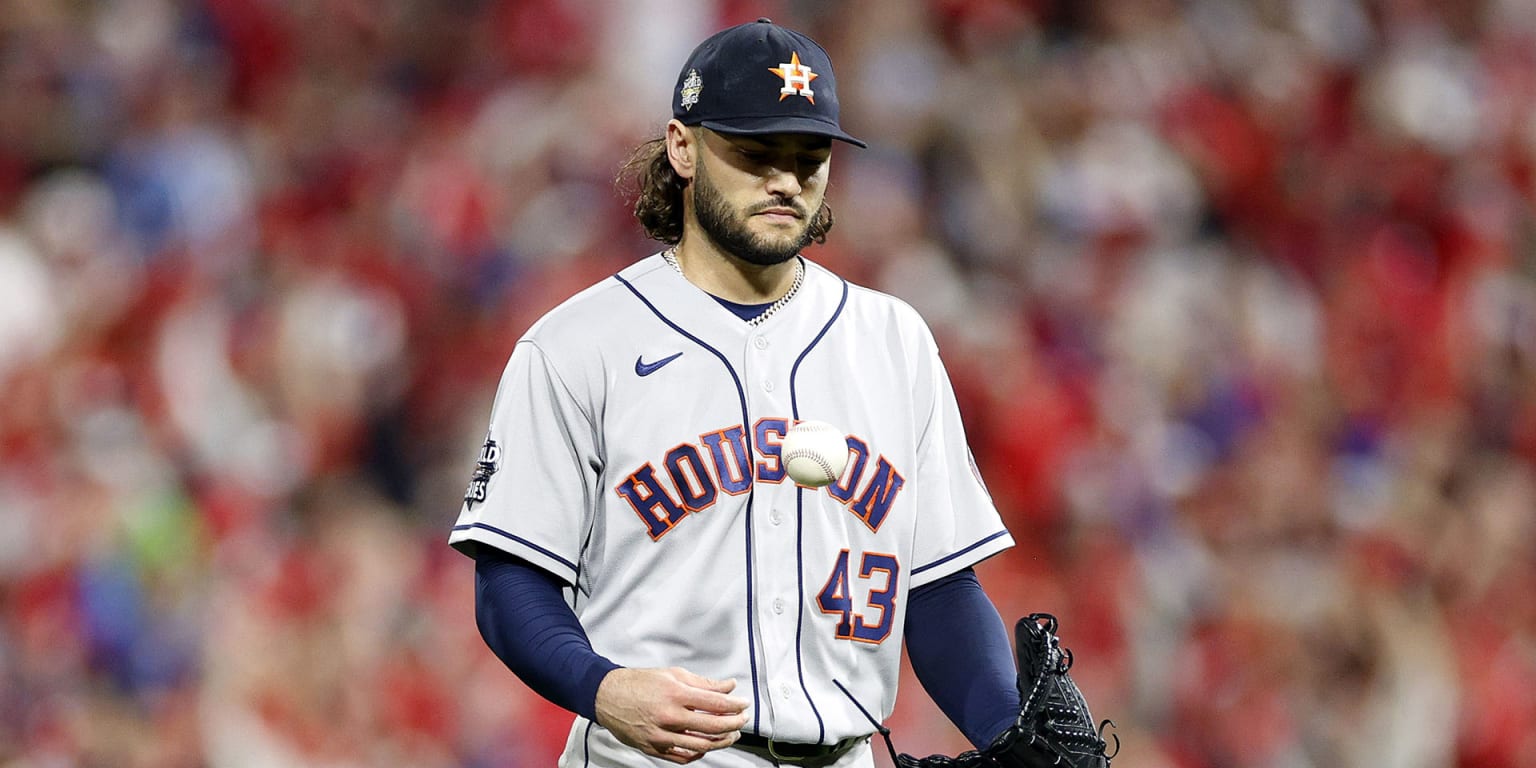 PHILADELPHIA — All it took for Astros starter Lance McCullers Jr. to realize he might be in a little trouble in Game 3 of the World Series was a quick glance behind him into the night sky, where a rocket off the bat of Phillies slugger Bryce Harper was headed for the seats.

McCullers quickly looked away as Harper’s tape-measure shot in the first inning put the Phillies ahead, giving them some early momentum and sending a sold-out crowd at Citizens Bank Park, which was hosting its first World Series game in 13 years, into a frenzy. That was only the start of a forgettable night for McCullers, who gave up five home runs in 4 1/3 innings as the Phillies whipped the Astros, 7-0, on Tuesday night.

“I got beat, man,” McCullers said. “They hit a lot of solid pitches, I thought. At the end of the day, we got beat pretty bad and I got beat up pretty bad. I obviously wanted to pitch well and pitch much better than I did, but at the end of the day all I can do at this point is get ready to go for a potential Game 7.”

With the win, the Phillies took a 2-1 lead in the best-of-seven World Series. In all best-of-seven postseason series tied 1-1, the Game 3 winner has captured the series 68 of 98 times (69 percent). In series with the current 2-3-2 format, teams breaking a 1-1 tie by winning Game 3 in their home ballpark have gone on to win the series 29 of 47 times (62 percent), including the Phillies in the 2022 NLCS vs the Padres.

McCullers, making his first World Series start since pitching Game 7 of the 2017 Fall Classic exactly five years earlier at Dodger Stadium, became the first player in postseason history to allow five homers in a playoff game. The fact that Astros manager Dusty Baker left him in the game to give up five homers is another story.

“It was kind of mind-boggling because he doesn’t give up homers,” Baker said. “He usually keeps the ball in the ballpark. He wasn’t satisfied with it. We were very surprised by it.”

After Harper hit his homer to make it 2-0, he was seen talking to on-deck batter Alec Bohm from the dugout steps moments later, as if to suggest he had picked up something in McCullers’ delivery. Bohm led off the second with a homer, and Brandon Marsh hit Philadelphia’s third homer two outs later. McCullers was pulled after giving up back-to-back shots to Kyle Schwarber and Rhys Hoskins in the fifth.

McCullers brushed aside any notion he may have been tipping pitches.

“I think guys have conversations all the time before at-bats, before innings and things like that,” he said. “I’m not going to sit here and say anything like that. I got whipped. End of story.”

When asked about tipping, Phillies right fielder Nick Castellanos said: “I’ll just say that the people whose job it is to go and find any information they can to make our lives easier is greatly appreciated. It’s a group effort.”

McCullers had given up four homers in 58 2/3 innings this season in the playoffs and regular season prior to Game 3 of the World Series. In all, the Phillies hit 1,950 feet of homers, tying a World Series record with five homers.

“There’s no excuses,” McCullers said. “I did not pitch well. They beat me. That was it. My stuff was good. I know that because I felt like it and I could check on the iPads. The stuff was there, the movement was there, the location for the most part was there. I made a couple of mistakes and unfortunately for me they hit them out of the ballpark.”

The four homers McCullers allowed this year in the regular season came on sinkers, but Harper hit a curveball out, Marsh and Hoskins hit sliders out, Bohm hit a sinker out and Schwarber hit a changeup. Astros catcher Martín Maldonado said it came down to poor execution.

“Too much of the slider on the plate on Hoskins, sinker ran all the way back for the solo homer on Bohm, 2-0 slider hit it for a homer [by Marsh], a changeup over the plate on Schwarber,” he said. “Those guys proved in the playoffs they can slug, and that’s our job to stop it.”

McCullers threw 32 sliders and 19 changeups, but only 14 sinkers. Eight of those came in the first inning, as he started relying more on changeups and cutters in the third and fourth innings during a stretch in which he sent down eight batters in a row. That run ended when Marsh led off the fifth with a single and Schwarber hit a 443-foot homer to center field to make it 6-0 — a blast McCullers said was the “dagger.”

“They just had good at-bats,” he said. “I felt like I made some adjustments and went on a little bit of a decent run towards the middle of the game and then obviously they hit the two homers before I got taken out. This is a game of adjustments, and they’re a good team. I’ve said that before. Got beat today.”