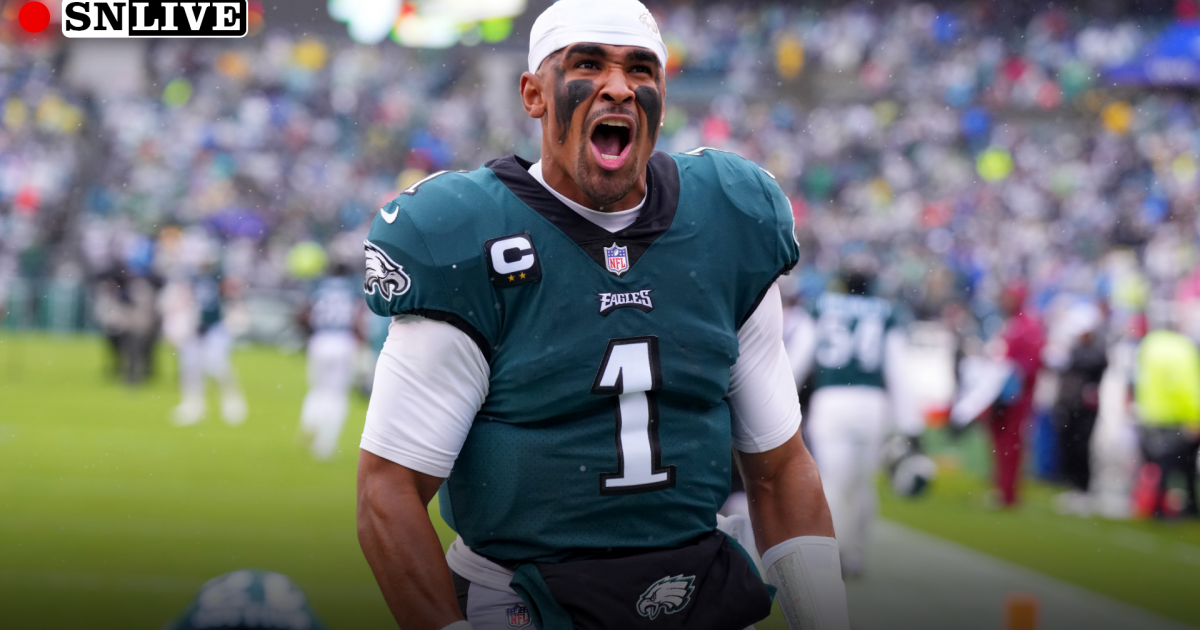 We are eight weeks into the 2022 NFL season, and the Eagles still have yet to lose their first game. Just as we all expected.

Philly’s incredible start has taken a lot of experts by surprise, and they’ll look to stay undefeated in primetime this week as they take on the Texans on “Thursday Night Football.”

Jalen Hurts has worked his way firmly into the MVP discussion thanks to 16 total touchdowns and just two interceptions through the first eight weeks. His favorite target, A.J. Brown, has also been stellar, averaging more than 94 receiving yards per game and racking up five TDs so far. They’ll look to keep it going tonight against the struggling Texans.

Lovie Smith’s first season as Houston head coach has been a disappointment, with the team currently sitting at 1-5-1. Last time out against the Titans, the Texans were ripped apart by Derrick Henry to the tune of 219 yards and a pair of touchdowns. It ended in a 17-10 loss.

“When you have disappointment like that, the good part is that you get to play a game sooner than normal,” Smith told reporters, “so this Thursday game can be a blessing in disguise a little bit.”

The Sporting News is tracking live scoring updates and highlights from Eagles vs. Texans on “Thursday Night Football.” Follow along for all the key moments from the Week 9 matchup.

8:36 p.m. — It’s 3rd and 8 again, but for the third time this drive Hurts converts — this time with a completion to Dallas Goedert. First and goal, Philly.

8:35 p.m. — Hurts goes over the middle to tight end Jack Stoll for a 13 yard gain, and the Eagles have worked their way into the red zone.

8:28 p.m. — Hurts goes to work for the first time tonight, and he gets some help after Houston’s Jalen Pitre gets called for an early pass interference penalty.

8:22 p.m. TOUCHDOWN — Wow, what a drive! On 2nd and goal, Mills tosses to rookie tight end Teagan Quitoriano, who hangs on with two defenders fighting for the ball all the way to the ground! Great catch, and the Texans have a surprising early lead!

8:21 p.m. — BIG play! Mills goes deep left to Phillip Dorsett, who adjusts mid-air to make a great back shoulder catch for a big gain! The Texans are in the red zone.

8:20 p.m. — On 3rd and 5, Mills finds Rex Burkhead to his right, who powers ahead to move the sticks. This is a solid opening drive for Houston.

8:19 p.m. — Rookie running back Dameon Pierce is off to a good start, ripping off an 11 yard run on the first play from scrimmage, then powering for 5 more a couple plays later for another first down.

8:17 p.m. — We’re all set for kickoff in Houston. Davis Mills and the Texans will receive the ball first.

8:14 p.m. — Tonight is something a homecoming for Hurts, who was born in Houston and grew up in nearby Channelview, TX.

8:10 p.m. — Jalen Hurts is having the best season of his young career in 2022. He’ll look to keep it going tonight against a porous Houston defense.

8:07 p.m. — The Texans are breaking out their color rush red jerseys tonight.

Fire in the chat. pic.twitter.com/ptO4HLsT1z

7:29 p.m. — It’s a big sports night in Houston and Philly. Not only are the Texans and Eagles facing off, but the Astros and Phillies are playing in Game 5 of the World Series. We’ve got a live blog going for that game too!

What channel is Eagles vs. Texans on today?

Like all “Thursday Night Football” games this season, Eagles vs. Texans will be streamed on Amazon Prime Video. Al Michaels (play-by-play), Kirk Herbstreit (color analyst) and Kaylee Hartung (sideline reporter) will be on the call from Houston.

The game will also be available to watch on traditional over-the-air TV channels in Philadelphia (WPHL) and Houston (KTXH).

Those watching from Canada can use DAZN, which features every NFL game.