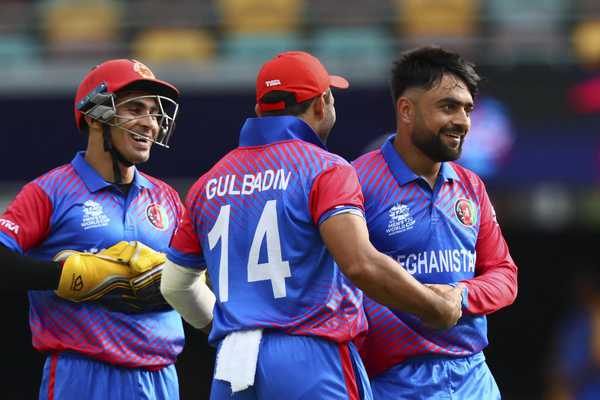 WICKET David Warner’s funky shots and quick running did help Australia to a brisk start, but an attempted switch hit backfired as Naveen ul Haq breached his defence and had his offstump knocked out with a rather innocuous delivery.50/2 in 5.2 overs

WICKET Fazalhaq Farooqi strikes. Looking to cut the left-arm pacer, Cameron Green offers an easy catch to the slip fielder. Falls for a 2-ball 3. 22/1 in 2.1 overs

David Warner has taken the attack to Mujeeb ur Rahman, hammering the spinner for three boundaries in a 16-run over. Australia make a quick start.22 for no loss in 2 overs

For the record:Since Rashid Khan’s BBL debut, only Glenn Maxwell (66) in Australia’s XI today has made more BBL appearances than him (61).

TOSS:Afghanistan have won the toss and elected to field. Australia have made three changes. Along with Finch, Tim David and Mitchell Starc have been left out, while Cameron Green, Steve Smith and Kane Richardson come in.

JUST IN: Aaron Finch has been ruled out of the match. Matthew Wade will captain the side in his absence

While we wait for the toss, here’s something for you to read: From war zone to cricket pitch: The Afghan story in Adelaide

Also, here’s our match preview for the game: Australia live on hope as title defence hangs by a thread

In case you want to know what’s happening in the other group following Pakistan’s win over South Africa last night, here’s how the qualification scenario in Group 2, with four teams in contention for a semifinal berth.

Hello and welcome to Match 38 of the ICC Men’s T20 World Cup 2022, set to be played between Australia and Afghanistan at the Adelaide Oval. Aaron Finch and his team find themselves in a must-win position, but one that still doesn’t guarantee them a place in the semifinals. Afghanistan, on the other hand, haven’t had much going their way in this tournament, being the only team not to have a single game. What they can do, however, is end the campaign for the hosts and the defending champions, Australia – who would not only aim for a victory, but would want to do it with a significant margin to improve on their Net Run Rate.

We will be bringing you the live updates from the contest. You can join in as well with your views and questions. Tweet to us using #CricbuzzQnV.