‘GET THE CROWD INTO IT’ 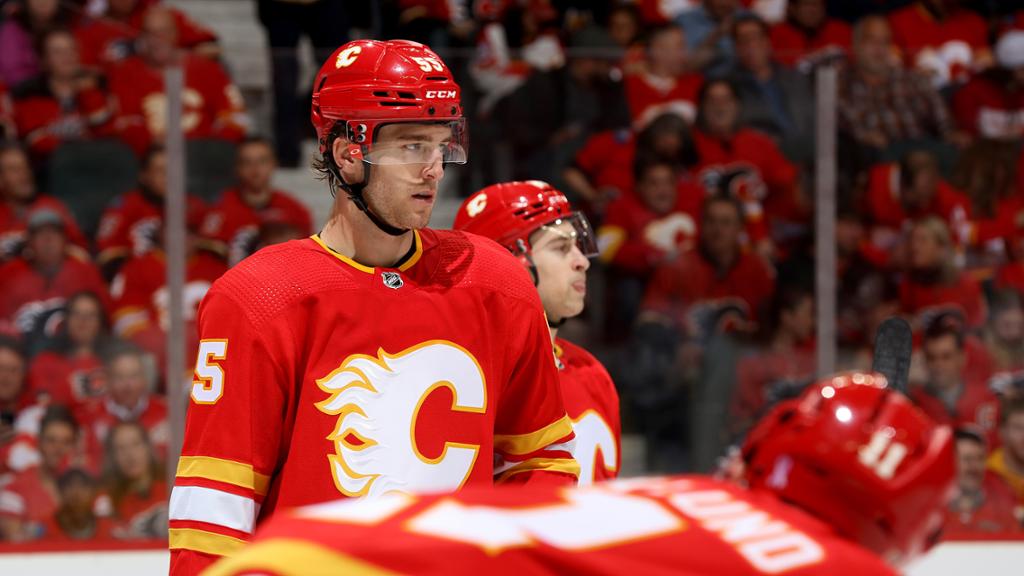 There can be no dipping your toe in the water.

With puck drop set for 8:14 p.m. MT, the Flames will know by a quarter-after – at the very latest – what they have in the stores.

“It’s always business for us, but that first shift is huge,” said Noah Hanifin. “You want to come out with a lot of energy and get on the body. Especially playing at home, we want to get the crowd into it as well. The last few games, we haven’t had great first periods and that’s cost us. We can do much better with that and tonight is a good opportunity for us to get back on track.”

Hanifin’s D partner, Rasmus Andersson, called this one a “must win.” Andrew Mangiapane took to the mic and stressed the team’s “focus.” Darryl Sutter, who was critical of the team’s “urgency” following a 4-1 loss to the Predators the other night, is asking his team to pick it up, post-haste.

No matter the diction, it’s now three consecutive losses for the Flames, who will be looking to snap out of this funk against a red-hot Devils team whose comeback win over the Oilers Thursday is still getting play on the national highlight reels.

New Jersey is one of the NHL’s top possession teams and is generating home-plate chances at a rate far better than anyone else.

You either bring it tonight, or risk getting run out of the building.

“Everyone in this locker-room, we all understand that we’ve got to start taking accountability and get back to our game,” Hanifin said. “We know New Jersey is playing some really good hockey right now and they’re going to come out and work really hard. It’s about getting back to our game and playing quick and as defencemen, getting the puck up into our forwards’ hands and winning a lot of our battles.

“Really, it’s about moving the puck quick, everyone being connected and knowing where each other is going to be.

“Sometimes, on the backend, I think we’ve been a little too hesitant, at times. I think we can be more assertive and I think that causes our team to play faster.”

When the players use words like that – “fast,” “pace,” or any other variation of quickness – they’re not referring simply to foot speed.

Typically, it’s about puck movement. Exits. Entries. Distributing the pill and making plays, at speed, through the neutral zone. As Hanifin alluded to, the disconnect over the past few games has led to a series of turnovers. It’s ultimately what’s plagued them.

“We practice it all the time,” Hanifin said, referencing the ‘quick-ups’ and breakouts that are a staple at every practice and morning skate. “We’ve obviously had a weird schedule, but we’ve had enough games now where we know where each other is going to be out there and supporting the puck the right way.

“We also have a lot of veterans on this team that know how to play the game the right way.

“It’s about trusting each other. And when we trust each other, we’re more predictable and that’s what when we play fast.”

While it has been a sore spot of late, Flames fans can take comfort in the fact that it’s entirely uncharacteristic of this group. How many times last year did this issue present itself? Rarely. And when it did, it was quickly put to pasture.

Good habits are baked into the ‘foundation,’ and allow this team to revert back when things go south.

Even with all the angst of the past week around the Saddledome, the Flames have remained a Top-5 possession team, while surrendering a league-low 69 high-danger scoring chances against.

The Jesper Bratt-led Devils, who have rattled off five straight wins, are 8-3 on the year, and currently sit second in the high-powered Metro Division.

“We know it’s going to be a good test for us tonight,” Hanifin said. “They’ve got some guys that can bang, too, so we’re expecting it to be a fast, physical game.

“But for us, it’s always about worrying about our game.

“We’re not where we need to be right now, so we’ve got to get back to that and that’s all we’re focused on.”