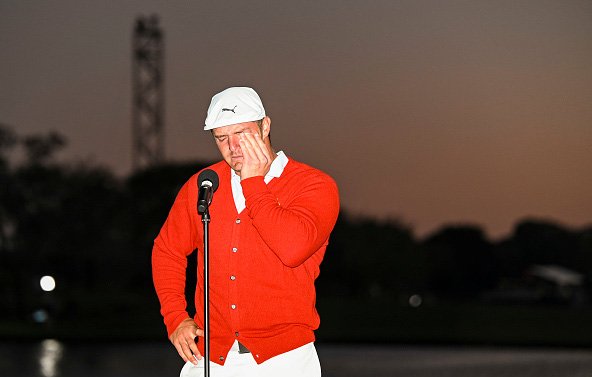 Fans know the golf scientist, Bryson DeChambeau, for his techniques and bulked-up physique. However, he is not all about the scientific aspects of golf but has a big heart too. And in that heart, his family, especially his father, holds an extraordinary place. Many golfers like Tiger Woods also love their father, who played an essential role in making him the legend he is today.

Similarly, the father of DeChamebau, John Howard Aldrich DeChambeau, played an essential role in making him the pro golfer he is today. In 2020, a former PGA member wrote a heartfelt letter on Father’s Day on Twitter. It will melt your heart away.

What did the letter of Bryson DeChambeau say?

In 2020, on the occasion of father’s day, DeChambeau paid tribute to his father, Jon. He posted a picture of the NCGA father-son tournament, where they both held the victory medal.

He wrote, “Happy Father’s Day to my dad who has always pushed me further than I thought I could go and believed in me to see it through. Throwback to the @ncga1901 Fathers / Son Tournament days. #HappyFathersDay“

The father of the eight times PGA tour winner has been very supportive. Being a pro golfer, he knew the good and bad of the sport. The local golfer taught his son the swings, and the proper techniques, which he later enhanced by adding science to it. And fans have all seen DeChambeau’s love for his parents. It shows that he is grateful for all the support he has received throughout.

In September 2020, post his major victory at the U.S. Open, he got emotional as he shared the win with his parents over a video call. After claiming a six-shot victory at Winged Foot Golf Club, he burst into tears when he saw his parents on the big screen. That was a significant moment for all the fans and the pro golfer. And the reason for the tears rolling down was that he wouldn’t be there if it were not for his parents.

In 2019, during U.S. Open, the family of the LIV member saw him playing live on the course. Thousand of people were getting ready to watch the toughest golf test at Pebble Beach. Jon was beyond happy to see his son among the best golfers in the world. The cherry on the cake was the match held during the father’s day weekend.

After losing his left leg to diabetes and kidney failure, it was not easy for Jon to be able to watch his son play. However, after a successful kidney transplant in 2017, things got better for the duo and he could watch his son lay live on the golf course.

What are your thoughts on the heartfelt note and beautiful bond of father-son? Let us know your views in the comments section.