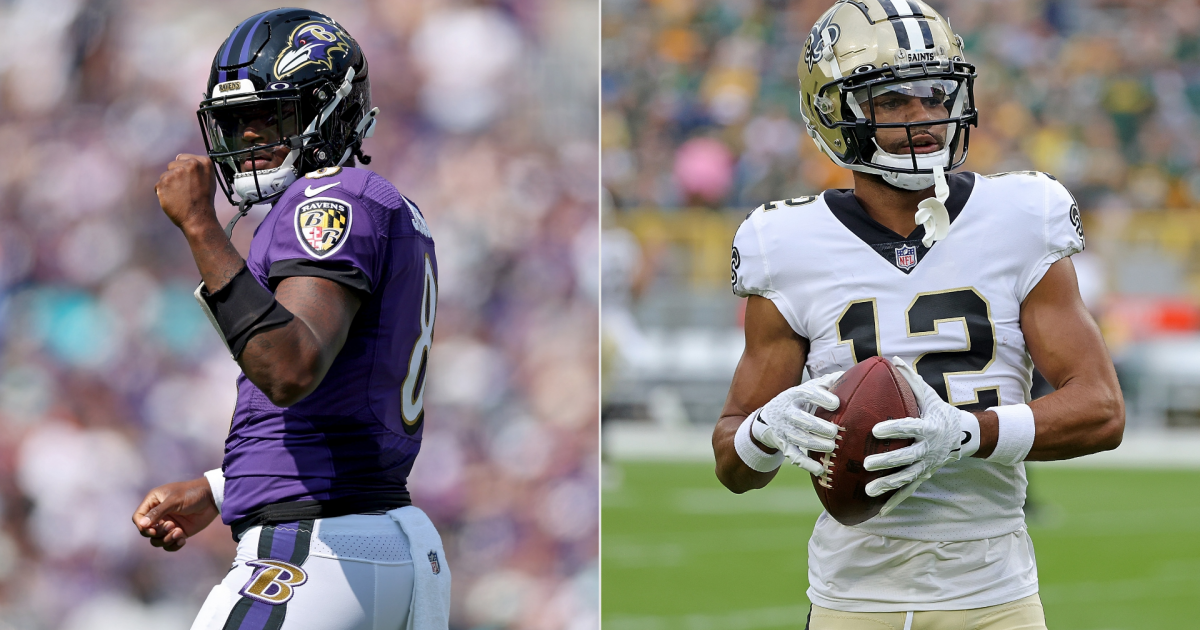 For the second-straight week, the Ravens have another primetime road contest as they head down to Big Easy to play the Saints at Caesars Superdome on Monday Night Football. The Ravens are 2.5-point favorites, and the total is set at O/U 47.5 points, according to BetMGM. Baltimore could be missing a couple of crucial playmakers on offense (Gus Edwards, Mark Andrews) for this matchup, but that should not deter DFS players from stacking their DraftKings Showdown lineup with Lamar Jackson, Devin Duvernay, Isaiah Likely, etc.

On the other side of the field, the Saints announced earlier this week that Michael Thomas (toe) is out for the rest of the season. Based on this news, it should open the door for Olave to be the team’s No. 1 wide receiver for the foreseeable future. The rookie wideout will be rostered in many showdown lineups, along with star RB Alvin Kamara, who had an excellent performance last week against the Raiders.

Before we get into our lineup and strategy, here are the key scoring settings for DraftKings Showdown contests: They’re full-point PPR and there are three-point bonuses for 300 passing yards, 100 rushing yards, and 100 receiving yards. The Captain pick costs 1.5 times a player’s original price, but he also gets his point total multiplied by 1.5.

MORE DK SHOWDOWN: How to win a Showdown contest

Many DFS players will choose to put Kamara or Jackson in their Captain spot due to their big play ability and production. However, we will go against the public and roll with Olave. The rookie wide receiver has lived up to his first-round status this season, with 37 receptions for 547 yards and two touchdowns. Olave is also averaging 15.8 DraftKings points per game this season and scored 10.2 DK points last week against the Raiders. The former Ohio State star has a chance to build off that performance on Monday night against a suspect Ravens’ defense. Baltimore’s defense allows the fifth-most DraftKings points per game to WRs (41.4) and eight touchdowns this season.

The superstar quarterback might not have his top offensive weapon on Monday night, but that will not stop us from putting Jackson in our lineup. The dual-threat quarterback had one of his better DFS performances last week against the Buccaneers. Jackson scored 21.8 DraftKings points, thanks to 281 total yards and two TD passes. The last time the former league MVP recorded 20 or more DraftKings points in a game was in Week 3 against the Patriots (43.4). Jackson will be facing a middle-of-the-pack Saints’ defense, which is allowing the 15th-most DraftKings points per game to QBs this season (17.3). If this was any other quarterback, you might be hesitant to start him. However, Jackson can affect a game in multiple ways and be an ex-factor in NFL DFS.

With Olave as our captain, it only makes sense to have Dalton in the lineup. Dalton has put together solid back-to-back DFS outings over the past two weeks, despite throwing three interceptions in Week 7 against Arizona. He’s averaging 24.8 DraftKings points per game over that span and scored 17.2 DraftKings points in last week’s win over the Raiders. Dalton will try to duplicate that performance on Monday against a shaky Ravens’ defense, which will give up big plays through the air. Baltimore has allowed the eighth-most DraftKings points per game to QBs this season (21.6). New Orleans’ offensive line must keep Dalton upright in the pocket, as the Ravens have recorded 23 sacks this season.

Likely may be the Ravens’ second-best receiving option if Andrews cannot play. The rookie tight end made his presence felt in a big way last week against the Buccaneers. The former Coastal Carolina star had a career-high six receptions (seven targets) for 77 yards, a touchdown, and 19.7 DraftKings points. Likely does not have an easy matchup against the Saints, who are allowing the second-fewest DraftKings points per game this season to TEs (6.6). However, he’ll be featured a ton for an offense that will need guys to step up in the passing game.

We will take a flier on Johnson, who could make some noise against this Ravens’ defense. This season, the Ravens allow the 16th-most DraftKings points per game (12.2) and four touchdowns to tight ends. If you put Johnson into your lineup, you hope he can provide 4-5 catches. The last time we saw Johnson in primetime, he scored 20.2 DraftKings points and two touchdowns against the Cardinals in Week 7.

Our final MNF showdown contest play will be Tucker, one of the best kickers in the league and NFL history. The veteran placekicker can score double-digit fantasy points by himself and should have some chances on Monday night. Last week against the Buccaneers, Tucker recorded nine DraftKings points, making it the fifth-straight game he’s made at least two field goals. He’s also averaging 11.4 DraftKings points per game over that span, which is higher than his season average (10.3).