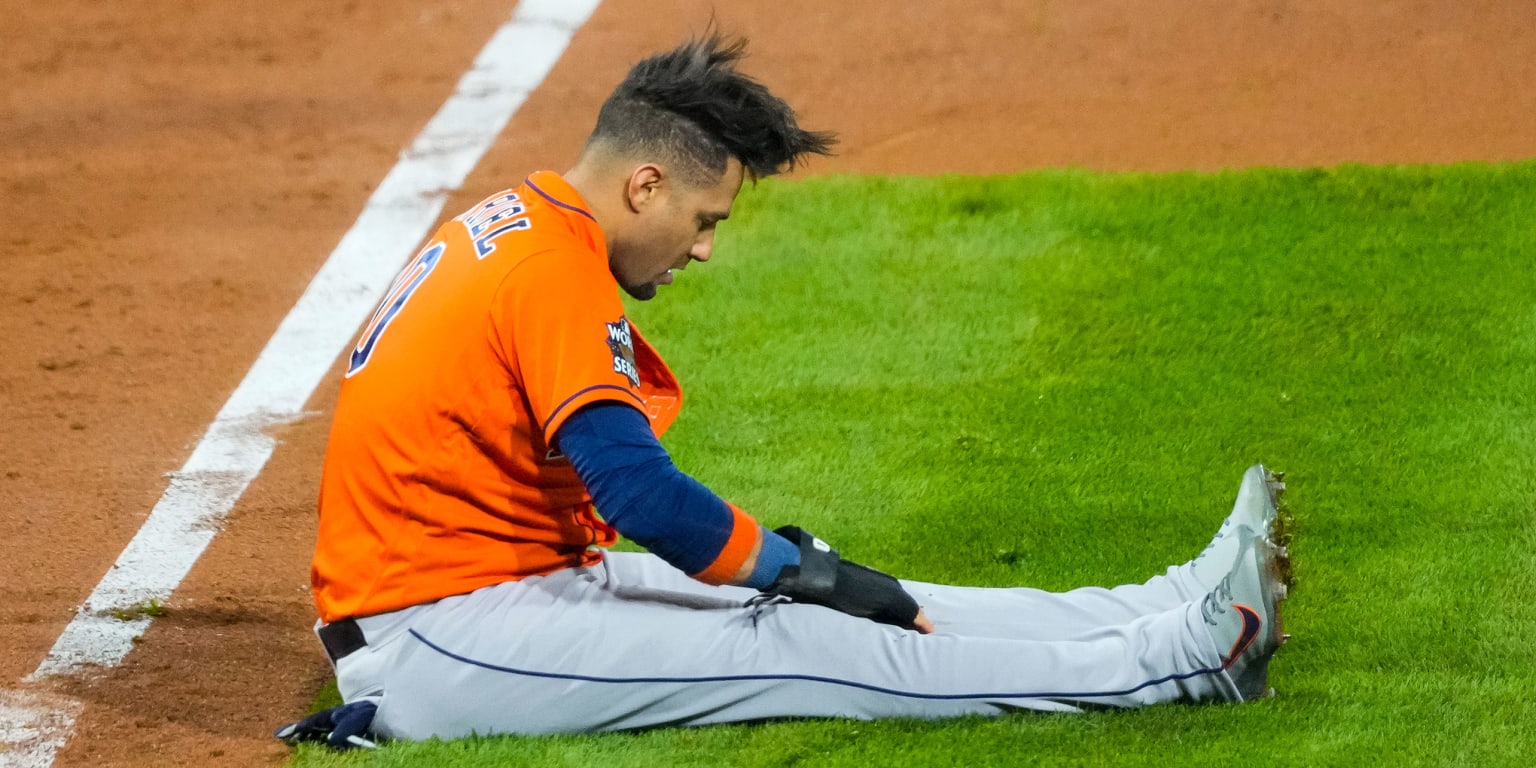 HOUSTON — Astros first baseman Yuli Gurriel, who exited Game 5 of the World Series early with a right knee injury, was taken off the team’s roster due to a right MCL sprain and was replaced by rookie catcher Korey Lee. Houston manager Dusty Baker said Gurriel ran on the field earlier Saturday to test his knee.

Dr. Gary Green, Major League Baseball’s medical director, confirmed the injury after communicating with the evaluating physician. MLB postseason rules provide that a team may request permission from the Commissioner’s Office to replace a player who is unable to play because of an injury.

“[Gurriel] tried everything,” Baker said. “He came in yesterday and got treatment, came in this morning and got treatment and didn’t respond well enough to play. He tried to run, and from a guy who had knee injuries, the hardest thing to do is to stop and then to round the bases and have lateral movement. He tried everything. He wasn’t crying, but he had tears in his eyes. You could tell how badly he wanted to play. He just couldn’t do it, and we had to replace him.”

With a third catcher on their roster, the Astros started Christian Vázquez at designated hitter in Game 6, with Martín Maldonado behind the plate. Lee, who hit .160 in 12 games for Houston this year, was on the club’s playoff taxi squad. Baker said he’s thought about hitting Vázquez at DH many times this year. He did it only once because he didn’t want to take the chance of one of the two catchers getting injured.

“No. 1, he’s a contact guy,” Baker said of Vázquez. “I can do a lot of things with him. I did that one time as an experiment to see. I had wanted to do it a couple of times, but I didn’t want to have to necessarily, in case something happened to Maldy … I really didn’t want to put my team in a position where I was going to lose [the] DH and put a pitcher in there and hit for the pitcher and revert back to my National League days with only a four-man bench.”

Gurriel injured his knee in the seventh inning in Game 5 when he was tagged awkwardly by Phillies first baseman Rhys Hoskins during a rundown. The injury followed the end of Gurriel’s impressive string of 48 consecutive plate appearances without a strikeout this postseason, which ended in the fourth inning when he fanned against Connor Brogdon.

Gurriel, who caught the final out in Game 7 to clinch the 2017 World Series win over the Dodgers at Dodger Stadium, was hitting .347 (17-for-49) with two homers and four RBIs in the postseason, including 6-for-19 with one RBI in the World Series. Trey Mancini replaced him at first base in Game 5 and made a stellar play to snag a Kyle Schwarber line drive at first base.

“Yuli’s been one of our best hitters in the postseason, so obviously, it stinks not having him,” center fielder Chas McCormick said. “But we have guys that know their role, and we’re confident in anybody who is going to be in that lineup. We have a lot of good hitters on this team.”

Astros Game 6 starter Framber Valdez has the highest rate of ground balls in MLB and Gurriel is an excellent defender, having won a Gold Glove Award last year. So it stands to reason there will be plenty of chances for Mancini at first base. Baker said Mancini is at first because he has the most experience at the position.