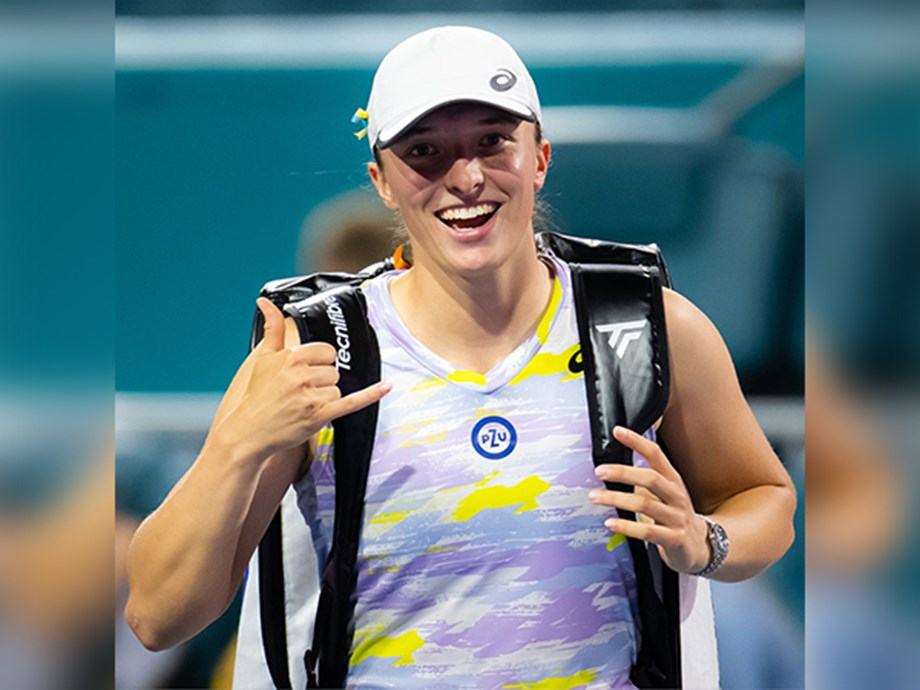 Iga Swiatek missed out on a place in the WTA Finals title match after a surprise defeat to Aryna Sabalenka on Sunday but the world number one said she is happy her “intense” season is finally at an end. The Pole, who went on a 37-match winning streak earlier in the year, won the French and U.S. Opens as well as titles at Doha, Indian Wells, Miami, Stuttgart, Rome and San Diego.

Danish teenager Holger Rune fought back from a set down to beat hot favorite Novak Djokovic 3-6 6-3 7-5 and win his first Masters title in Paris on Sunday. Rune, who beat four other top-10 players in Hubert Hurkacz, Andrey Rublev, Carlos Alcaraz, and Felix Auger-Aliassime en route to the final, will now move into the top 10 when the new rankings are published on Monday.

Behind 33 points from Donovan Mitchell and a dominant fourth quarter, the Cleveland Cavaliers scored their eighth consecutive win with a 114-100 defeat of the host Los Angeles Lakers on Sunday. Cleveland trailed throughout the first half on the second installment of a five-game road swing. But after a sluggish start, the Cavaliers settled in and took control in the second half. Los Angeles held an 80-77 lead with less than four minutes to go in the third quarter. Cedi Osman knocked down a game-tying 3-pointer at the 3:28 mark, and Cleveland never trailed again.

Kenyans Evans Chebet and Sharon Lokedi survived brutal heat and humidity to win the New York City Marathons on Sunday after Brazilian Daniel Do Nascimento collapsed during the race. Do Nascimento set a blistering pace with a roughly two-minute lead around the halfway point but after mile 20 staggered forward and collapsed, stunning onlookers as police officers ran to assist him. Race officials later said he was okay and had not been taken to the hospital.

Dominik Kubalik scored a power-play goal with 2:17 remaining in overtime as the visiting Detroit Red Wings rallied for a 3-2 victory over the New York Rangers Sunday night. Detroit won its third straight when Kubalik waited at the right side of the net for a pass from David Perron and tipped in the puck past goaltender Jaroslav Halak. Officials briefly reviewed the play to see if the Red Wings were offsides and did not change the call, allowing Detroit to end its three-game road losing streak. Halak stopped 33 shots and is 0-3-1 as a Ranger.

Sri Lanka Cricket (SLC) said on Monday it has suspended Danushka Gunathilaka from all forms of cricket following his arrest in Sydney over an alleged sexual assault and will not consider him for any selections. The 31-year-old was charged with sexual assault while in Australia to play in the T20 World Cup and was denied bail by a court in Sydney on Monday.

Arsenal ended champions Manchester City’s short stay at the top of the Premier League with a 1-0 win at Chelsea on Sunday that reinforced their credentials as genuine title challengers. A second-half goal by Brazilian defender Gabriel earned Mikel Arteta’s side their 11th win in 13 league games and they have now beaten Tottenham Hotspur, Liverpool and Chelsea.

Holger Rune said beating Novak Djokovic in the Paris Masters final on Sunday was the icing on the cake in a week where he bagged his first Master’s title and became the first Danish man to crack the top 10 of the ATP rankings. The 19-year-old rallied from a set down to overcome Djokovic 3-6 6-3 7-5 and deny the Serb a seventh title in the tournament, capping off a spectacular run in which he also beat four other top-10 players.

Aston Villa’s Philippe Coutinho will miss their next two games and could be out for longer due to a quadriceps injury, manager Unai Emery said, casting doubt on the Brazilian’s availability for the World Cup. Coutinho, 30, sealed a permanent switch to Villa from Barcelona in the close season following a successful loan spell but the playmaker has not scored or provided an assist in 12 league matches.