The PGA Tour’s broadcasts always have a bright shine, by design 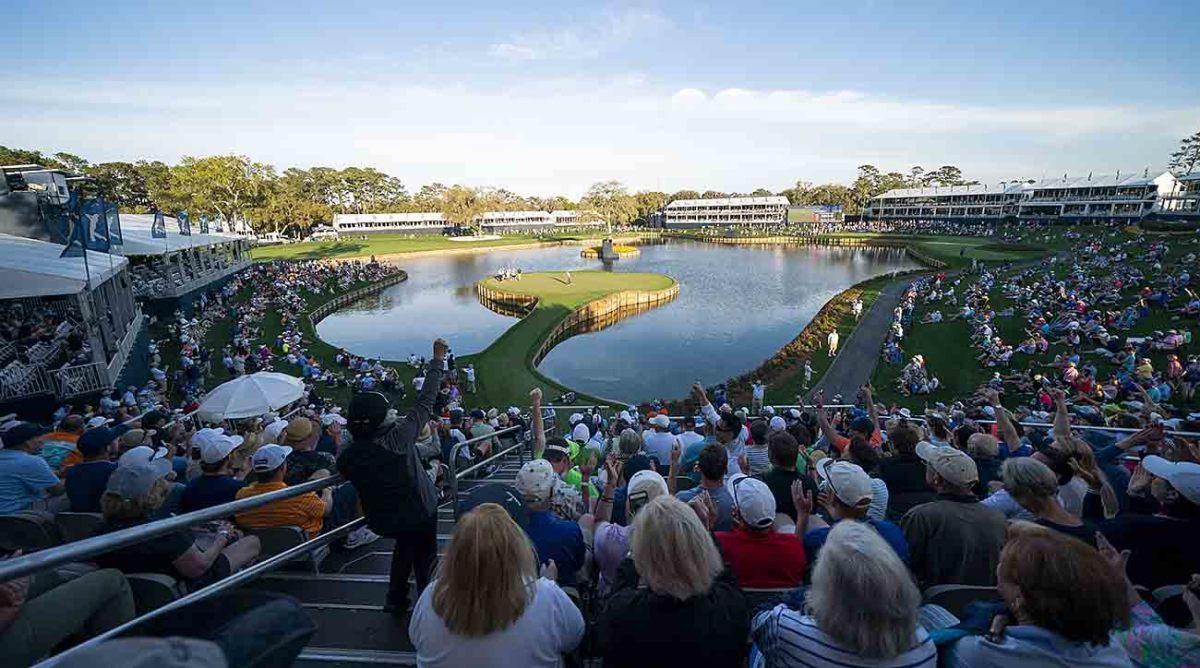 Since 99-point-something percent of golf’s viewing population watches the game on a telecast or stream instead of attending the actual event, the power of the electronic product itself cannot be overstated. And from its humble origin in the early 1970s to becoming the monolithic enterprise it is now, the PGA Tour has discovered more value in the visual medium than perhaps any other sports organization.

The local NFL or NBA team resides right down the street. Major League Baseball offers 81 chances to see your hometown club in action every year. Pro golf, however, doesn’t have any home games. It doesn’t benefit from the civic connection that assumes a huge role in separating successful franchises from struggling ones. The Tour is basically a caravan that performs in a different location every week, entertaining fans for four or five days before packing its bags and heading to the next destination.

That makes network television a vitamin of vast strength, especially in a world where health equals wealth. Millions of followers tune in on a regular basis, and though golf doesn’t generate the same massive audiences as college or pro football, the demographics of that viewership are both a goldmine and a guarantee. Corporations become title sponsors, which makes the players rich and the front office very happy.

It also makes headquarters nervous. Or protective. Maybe a bit paranoid. Does the coverage provided by CBS and NBC best reflect the dynamics of the entire operation? Does the quality of the presentation actually matter? Have objectivity and critical analysis become dinosaurs in a competitive environment where booing is never heard, where brilliance rules but glaring errors are frequently seen?

How much does the Tour try to control all those editorial variables? Does it discourage announcers from making negative comments or focusing on the misfortunes and dumb decisions that often define winners and losers? Does it hover over the programming like a meddlesome Little League dad, applying influence to the point of interference? Some people in the industry insist all that stuff happens.

Others who would know say it doesn’t, although it’s hard to imagine Camp Ponte Vedra, a hands-on empire if one ever existed, not lording over a department so crucial to its fiscal prosperity and relationship with the public.

“We were never involved in that very much at all,” says former commissioner Deane Beman, who ran the Tour from 1974 to 1994. “That was the network’s job. We tried to make suggestions but we weren’t successful enough [at the time] to tell them how to do it.”

What separates the Tour from other sports leagues is that it’s not really a league at all. It’s a member-driven organization in which the primary mission is to serve its constituency—not a commercially fueled outfit designed to accrue income by public support or approval. In a sense, it owes the rest of us nothing. It can function as it pleases, provided the players themselves benefit from the system, and since Tiger Woods showed up in late 1996, everyone has reaped substantial rewards from their Tour affiliation.

Beman might have left office almost three decades ago, but the structure he devised and the policies he implemented remain largely untouched. For example, the Tour doesn’t release information regarding player fines or other disciplinary action, as is customary in other major sports. It doesn’t provide any details on the voting for Player of the Year and Rookie of the Year—no extended results or the total number of ballots submitted—a lack of disclosure that surely explains why the awards receive little attention from the media.

Those are relatively small matters, however, compared to the Tour’s disdain for public criticism or a failure to “follow the script,” as one announcer put it. Another broadcaster recalls getting summoned onto the carpet by a high-ranking network superior because he failed to mention the FedEx Cup standings over the course of his duties, which has become a routine (and overwrought) procedure on every weekend telecast.

“He didn’t call me personally,” the culprit says of current commissioner Jay Monahan. “He only deals with the guys at his level, which are the big guys in New York, with the understanding that someone will pass along word [of the Tour’s displeasure] to the guilty party.”

In recent years, one of the Tour’s biggest pet peeves involves any on-air reference to prize money, which used to be a focal point before the courier came along and blew up the business model. FedEx Cup points are now the only measure that matters. Overall season tallies, the week’s biggest movers and shakers, specifics on the pile of ducats appropriated to the latest champion …

If you are among the enormous legion of golf fans sentenced to spend your Sundays locked in a small cell inside the Prison of Useless Information, you might want to consider hiring a mute button as your attorney. “Absolutely ridiculous,” a network source says of the Tour’s insistence on constant mention of its postseason derby. “After 15 years, you’d think they’d let up a bit, but it only seems to get worse.”

In all fairness, the men who manage golf’s mightiest machine are responsible for preserving the Tour’s shiny image—any perceptive golf fan knows the world’s best players stay off the police blotter and generally mind their own business. The idea that any unfavorable comment from someone in the booth will besmirch that reputation, however, is an exercise in needless handwringing.

Longtime NBC analyst Johnny Miller set the candor standard at an almost unreachable level, perhaps because he was so hard on himself when he failed to reach his own expectations. Paul Azinger had a wicked fastball when his broadcasting career began at ABC in the mid-2000s. He has mellowed over the years, perhaps cognizant of the return fire that comes from a man who blows a three-stroke lead with nine holes to play.

That said, Azinger can still bring it when the mood strikes him. Nick Faldo could get irate when something struck him as pious, usually a strategical blunder—Sir Nick didn’t speak in complete sentences and he sure as hell didn’t throw away strokes, either. Truth be told? The truth must be told. We’re talking about a sporting event here, a place where the competition is intense and thousands of fans have shown up ready to make an emotional investment.

Just as there are winners and losers, there are good causes and meaningless ones. If the Tour indeed tries to control the message in its relationships with CBS and NBC, perhaps Monahan now sees he has much bigger fish to fry. He can start with a shark.