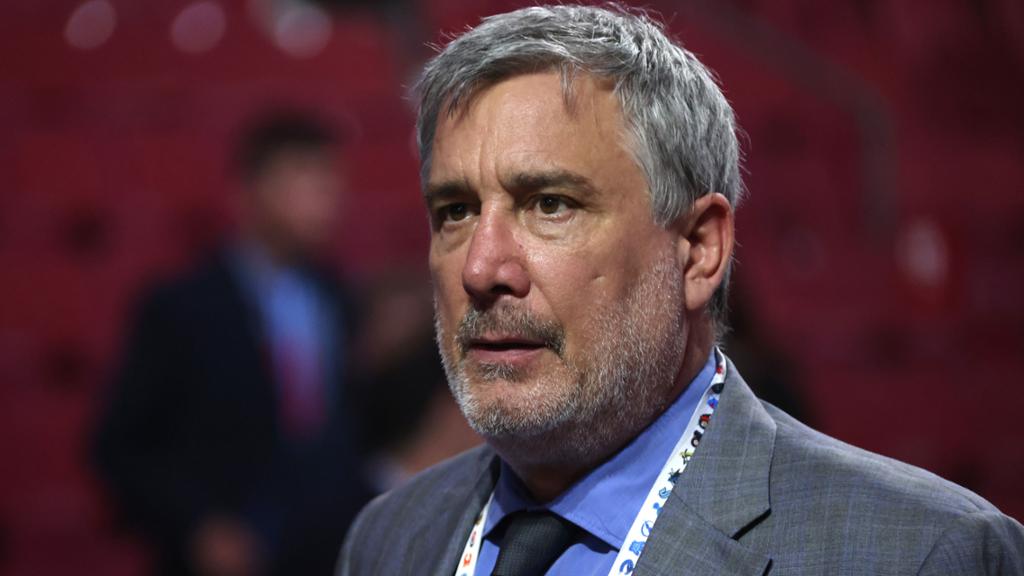 “We like to take pride in what we do in the community and how we hold ourselves accountable,” Neely said. “We dropped the ball and I’m here to apologize for that.”

The 20-year-old was selected by the Arizona Coyotes in the fourth round (No. 111) of the 2020 NHL Draft, but the Coyotes renounced his rights 22 days later after the Arizona Republic reported Miller had been involved in multiple racial bullying incidents of a special needs student, Isaiah Meyer-Crothers. The incidents happened in 2016, when Miller was 14, and resulted in a charge of assault and a violation of the Ohio Safe Schools Act, which Miller admitted to in court.

The Bruins announced Friday they signed Miller to an entry-level contract. They cut ties with the prospect Sunday, releasing a statement by Neely that read, in part, “Based on new information, we believe it is the best decision at this time to rescind the opportunity for Mitchell Miller to represent the Boston Bruins.”

Neely was asked about that new information.

“The fact that we didn’t talk to the family [of Meyer-Crothers] was concerning,” Neely said.

“That’s a great question,” Neely said. “I’m going to need to find out.”

Neely said he has not yet talked to Meyer-Crothers’ family but plans on doing so. Meyer-Crothers’ mother, Joni, has been particularly outspoken on social media about the damage caused by Miller to her son.

“I want to apologize to Isaiah and his family,” Neely said. “It’s something that they shouldn’t continue to go through.”

Asked if he was planning any discipline within the organization related to the signing, Neely said, “[That’s] something I have to deal with today and this week. We’ll see where it takes me.”

Neely would not comment on the financial implications of the decision to cut ties with Miller. He has not spoken with him since the decision.

Neely said it was “absolutely” a problem with the organization’s vetting process and said the decision to sign him came from hockey operations. He said that, in talking personally with Miller, the player expressed that he was working on himself and working through programs to make amends. Neely met with Miller, Miller’s mother and his agent, Eustace King.

But, Neely said, the organization didn’t ultimately have enough information and they should have dug deeper into what had happened.

The fact that the Bruins were looking at Miller came to Neely’s attention in early August, he said. General manager Don Sweeney said Friday after the signing that the Bruins were considering the player for six months to a year. Neely said at that time that would be “a massive decision for the organization to make.”

One piece of the decision to part ways with Miller was reaction from Bruins veterans and outrage expressed by the fan base. Sweeney spoke to some of the team’s leaders ahead of the signing. Sweeney and Neely addressed the players Saturday morning.

Bergeron, on Monday declined to reveal what was said in those meetings, but did say the idea of signing Miller was universally rejected.

“It’s not like everybody had something to say,” the Bruins captain said. “But I feel like the general view was that. And I’m glad that we were heard,” Bergeron said.

Bergeron, Nick Foligno and Brad Marchand spoke about Miller in Toronto on Saturday. All expressed misgivings.

“It’s tough,” Foligno said. “It’s a really hard topic. First and foremost, the organization is not going to do something that would jeopardize that. But in saying that, it’s not something anyone in this room stands for. The culture we’ve built, and these guys have built before I got here, is one of inclusion. I think it goes against that. I understand he was 14 when he made this mistake. But it’s hard for us to swallow because we take a lot of pride in here in the way we act, the way we carry ourselves, what it is to be a Bruin. So that was a tough thing to hear for our group.

“I’m not going to lie to you. I don’t think any guy was too happy because of how proud we are to say this is a group that cares a lot about ourselves, how we carry ourselves and how we treat people. So that was, for a lot of guys, especially the ones that have been here, a tough pill to swallow.”

Miller would not have been eligible to play in the NHL, at least at this point.

“What I understand and have heard through the media and anecdotally, what he did as a 14-year-old is reprehensible, unacceptable,” NHL Commissioner Gary Bettman said Saturday from Tampere, Finland, site of the 2022 NHL Global Series. “He’s not coming into the NHL. He’s not eligible at this point to come into the NHL. I can’t tell you that he’ll ever be eligible to come into the NHL.”

Neely said that he believes in second chances, part of the reason he was willing to give this opportunity to Miller. But, he clarified, there might be some instances those second chances aren’t warranted.

Ultimately, Neely said, it was a combination of everything that resulted in the decision to rescind the offer: the anger of the fan base and the desire to not put the organization through the situation any longer. Asked if, had there not been so much backlash, Miller would still be part of the team, Neely pointed to the decision to sign him in the first place as an indication that he would.

But, less than 72 hours after the announcement of the signing, the Bruins cut ties with Miller.

“I’m extremely upset that we have made a lot of people unhappy with our decision,” Neely said. “I take pride in the Bruins organization and what we stand for. We failed that.”

He said that there had been a lot of trepidation and hesitation within the organization leading up to the signing. He also said he misread what the reaction might be, leaning on his stated belief in second chances.

Bergeron on Monday had a message for the Bruins fans.

“I think it’s clear that I understand them,” Bergeron said. “That being said, for us nothing has changed as far as who we are as individuals, as a person, as a culture in this locker room, what our core values are, really. As much as I understand them, we hear you. We also feel like our values remain the same.”