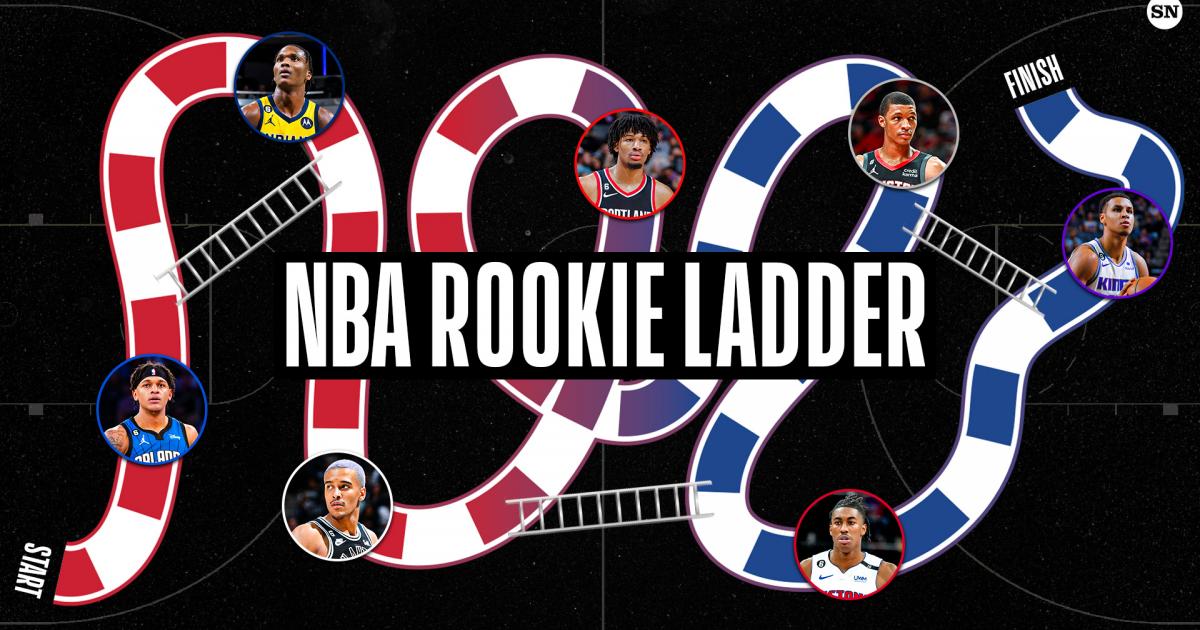 We’re only 10-plus games into the 2022-23 NBA season but that’s just enough of a sample size to evaluate the performances of this year’s rookies.

The 2022 NBA Draft class has already had some standout players emerge in what promises to be a talented and impactful group.

Yes, there are some “it’s still early” disclaimers. Nevertheless, you’ll have to excuse us for getting excited. Without further ado, here’s a look at our official rookie rankings through the first 10-plus games of the year.

NBA Rookie of the Year rankings

What Banchero has done to start his NBA career is unprecedented.

Any time you’re placing yourself in company with LeBron James, you’re doing something right, and Banchero has already done that twice.

On opening night, he became the first rookie to go for at least 25 points, five rebounds and five assists since James. He went on to score at least 20 points in each of his first five games, becoming the first teenager in NBA history to achieve that feat. When he recorded 33 points and 16 rebounds against the Kings last week, he joined LeBron as the only teenagers in NBA history with a 30-15 game.

His nine 20-point games are tied with a list of perennial All-Stars for sixth-most in the league, only trailing Kevin Durant (12), Jayson Tatum (11), Luka Doncic, Ja Morant and Stephen Curry (10 each).

It may seem farfetched on a struggling Magic team, but Banchero has a real possibility to join an elite group of (mostly) future Hall of Famers to make the All-Star team as a rookie if he keeps this pace. Only Blake Griffin, Yao Ming, Tim Duncan, Grant Hill, Shaquille O’Neal, Dikembe Mutumbo and David Robinson have achieved that since 1990.

Only 11 games in, it feels like the No. 1 overall pick is a lock for Rookie of the Year as long as he remains healthy.

For as remarkable as Banchero has been, Mathurin is making sure the Rookie of the Year race stays tight. The Pacers guard has been a walking bucket to start his career, averaging 20.4 points and 2.8 3s per game on wildly efficient .460/.437/.846 shooting splits.

For reference of how uncommon that is — if Mathurin maintained those numbers for an entire season, he would be the first rookie in NBA history to average 20 points and two 3s while shooting better than 45 percent from the field and 40 percent from 3.

He’s already gone toe-to-toe with All-Stars Kevin Durant and Kyrie Irving, erupting for his first-career 30-point game with six 3s in a win over the Nets.

Mathurin’s two 30-point games are tied with Banchero for the most among the rookie class, where no other first-year player has one.

Doing all of this damage coming off the bench, could Mathurin make a run at Ben Gordon’s crown as the only rookie Sixth Man of the Year in NBA history? If he keeps this up, it’s not as impossible as it might seem.

There were some concerns about how Ivey might fit next to a ball-dominant guard like Cunningham but so far, the backcourt has passed that test. Scoring has come easy for the explosive guard and he’s also leading the rookie class with 3.8 assists and 1.5 steals per game.

He’s had no trouble penetrating defenses, getting into the paint with a burst of speed to do damage around the rim.

And when defenses collapse on Ivey, his decision-making and passing growth has really shone through to kick out and find open shooters.

The Pistons rookie is looking more comfortable every time he steps on the floor and for as great as he’s been, the best is still yet to come for Ivey.

Murray became a popular darkhorse pick for Rookie of the Year after his performances in Summer League and preseason and even though he hasn’t lived up to that hype just yet, he has still been productive.

Murray has already proved he can score efficiently from anywhere on the floor in the same way we saw in college. He’s knocking down 2.4 3s per game — second-most in the rookie class — while converting at a 37.9 percent clip.

A slight three-game cold streak aside, Murray has been as good as advertised.

Smith started his rookie campaign on the right foot but his production has tailed off viciously in his last five games. After averaging 13.8 points, 6.5 rebounds and 1.3 blocks over his first six games, he has averaged 6.4 points, 5.4 rebounds and 0.6 blocks while shooting 24.4 percent from the field and 19.2 percent from 3 over his last five.

Tari Eason, Rockets: Eason is starting to settle into a 3-and-D role for the Rockets, averaging 1.4 steals per game while shooting 45.5 percent from 3-point range.

Jalen Duren, Pistons: Duren has been a monster on the glass, with his 29 offensive rebounds leading the rookie class. He has two double-doubles, three games with double-digit rebounds and has also recorded multiple blocks in four of his nine games.

Jeremy Sochan, Spurs: Sochan has started all 11 games for the Spurs, taking on a number of difficult and versatile defensive assignments from Karl-Anthony Towns to Jamal Murray to DeMar DeRozan.

Shaedon Sharpe, Trail Blazers: Sharpe’s role is reduced behind Damian Lillard and Anfernee Simons but when given the opportunity, he’s produced. Sharpe has scored double figures in eight of his 11 games, shooting an efficient 51.2 percent from the field and 44.0 percent from 3. He’s also already putting together an impressive reel of highlight dunks.

Walker Kessler, Jazz: Kessler’s 1.7 blocks per game leads the rookie class, recording multiple blocks in six of his 10 games. His 74.3 percent shooting from the field also leads all rookies who attempt over one shot per game.

For comprehensive rookie leaderboards, you can check out daily updated rookie stats here.