Rantanen has two goals, assist for Avalanche in win against Predators 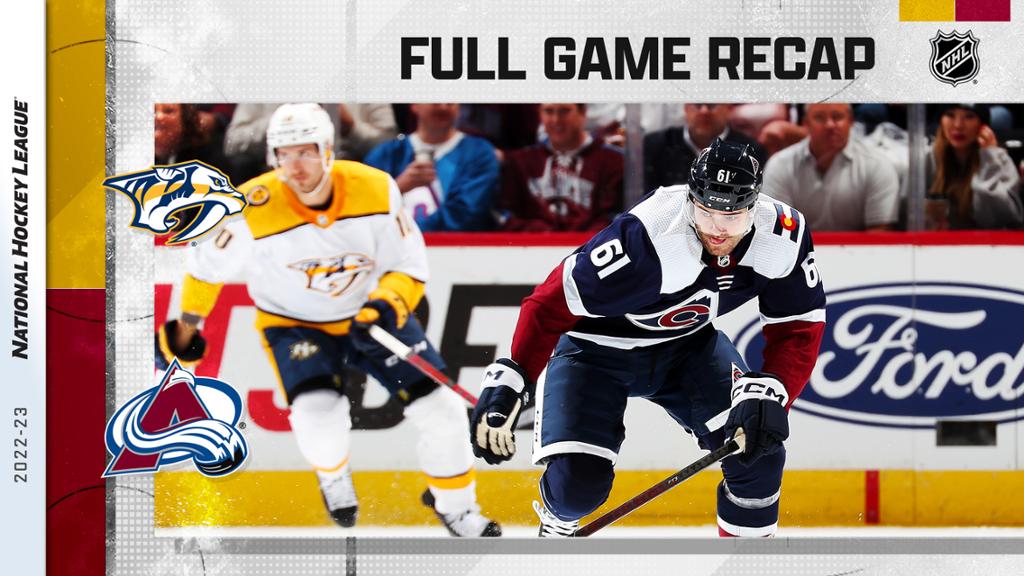 DENVER — Mikko Rantanen had two goals and an assist for the Colorado Avalanche in a 5-3 win against the Nashville Predators at Ball Arena on Thursday.

It was Colorado’s first game since sweeping the Columbus Blue Jackets at the 2022 NHL Global Series in Finland on Nov. 4-5, and first home game since Oct. 21.

Logan O’Connor scored twice, and Alexandar Georgiev made 32 saves for the Avalanche (7-4-1), who have won three straight.

“I thought we had a great second period, but first period gave up too much, kicked the puck around a lot. A lot of icings. Just not sharp,” Colorado coach Jared Bednar said. “We did some good things on the offensive side of it.

“I thought we had some guys that played outstanding tonight. [Nathan] MacKinnon was phenomenal. Logan O’Connor, phenomenal. Mikko had a pretty good night finishing. We capitalized on our chances in this game, they didn’t. That was the difference.”

Eeli Tolvanen, Ryan Johansen, and Roman Josi scored, and Kevin Lankinen made 30 saves for the Predators (5-8-1), who went 2-3-0 on their five-game road trip.

“You can’t be a hard team to play against when you give up easy offense like we have multiple times on this road trip, and then particularly tonight,” Nashville coach John Hynes said. “We’ve got to be smarter. I think you look at some of the chances we give up, it’s unacceptable. The awareness, whether it’s some decisions with the puck or it’s decisions without the puck, we give up two breakaway goals in the second period. We’ve got to be smarter than that.”

The Avalanche scored four goals in the second period to take a 5-1 lead.

O’Connor made it 2-1 at 6:34 when he redirected a shot from Devon Toews. He then extended the lead to 3-1 at 7:59 with a forehand-to-backhand deke on a breakaway.

“I had a lot of speed coming through the zone, so I figured if I could get it around [Lankinen] a little bit I’d have a chance there to beat him,” O’Connor said. “I knew pretty early that that’s what I wanted to do.”

Rantanen made it 4-1 at 10:48 on another breakaway after exiting the penalty box.

“You don’t get breakaways too often. I’ve been pretty lucky,” Rantanen said. “Got one against the (New York) Islanders (on Oct. 29). When you’re all alone like that, you might get two in a season, so [you] try to capitalize.”

Video: NSH@COL: Rantanen scores out of the penalty box

Johansen brought Nashville to within 5-2 at 19:32 with a power-play goal, redirecting a point shot from Mikael Granlund.

Josi cut it to 5-3 at 2:59 of the third period from outside the right face-off circle.

Tolvanen gave the Predators a 1-0 lead when he finished a cross-crease pass from Ryan McDonagh into an open net at 3:45 of the first period.

Rantanen tied it 1-1 at 7:37 when he one-timed a pass from MacKinnon on a power play.

“Me and ‘Nate’ have been playing together for a while now, so obviously there’s some chemistry,” Rantanen said. “Nate’s a really good passer and he finds those seams really well. I thought we did a good job before that moving the puck and maybe they were getting a little bit tired. Then those seams open up, and a great pass from Nate.”

NOTES: Avalanche forward Shane Bowers played 1:46 before sustaining an upper-body injury on his third shift in his NHL debut. … Rantanen has 10 points (six goals, four assists) in a four-game point streak. … O’Connor has four goals in his past three games. … MacKinnon has 11 assists in a four-game point streak. He played his 650th game to tie Anton Stastny for 10th in Quebec Nordiques/Avalanche history. … Tolvanen had two shots and four hits in 9:09 after being scratched the previous three games. … Predators forward Cody Glass returned after being scratched four games. He had an assist in 9:38.