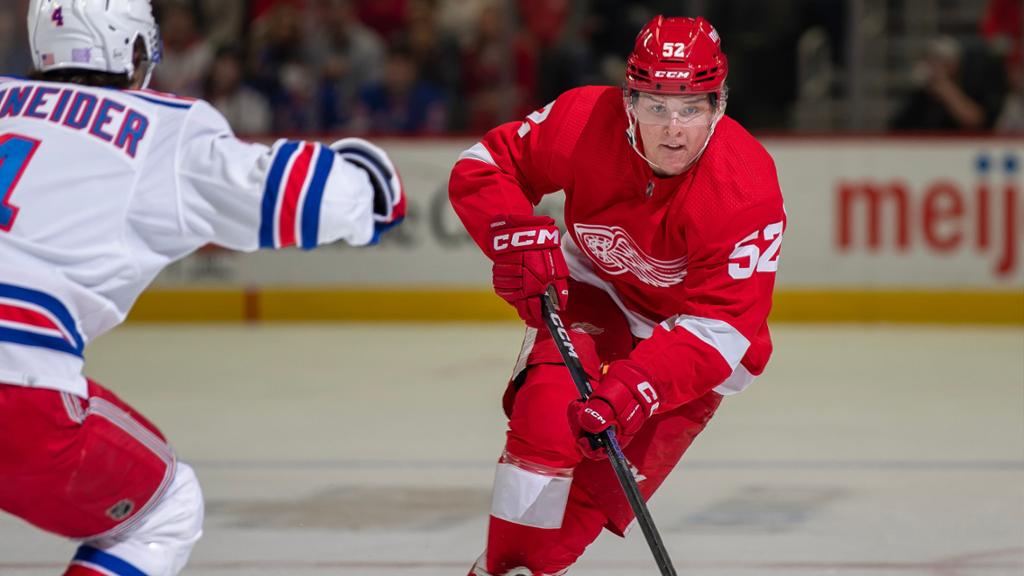 Joe Veleno and Lucas Raymond both scored for the Red Wings, who allowed six unanswered goals in the third period. Ville Husso made 25 saves in the loss.

“It was the same story as Buffalo,” captain Dylan Larkin said. “It just kept going in. We shot ourselves in the foot with errors and they capitalized on them.”

“We didn’t have a lot of pop and energy as a group, and he did,” head coach Derek Lalonde said about Berggren, who led the American Hockey League’s Grand Rapids Griffins last season with 64 points (21–43–64) in 70 games. “He created some offense there with Joe. I think that line was good.”

Oskar Sundqvist, who missed the past seven games with an upper-body injury, returned to the lineup against the Rangers and registered 14:48 of ice time for Detroit (7-4-3).

NEXT UP: Detroit will kick off a four-game road trip on Saturday night when it faces the Los Angeles Kings at Crypto.com Arena.

The Red Wings tied the game when Veleno’s pass went to Berggren just below the blue line. Berggren carried the puck into the right faceoff circle, then set up Veleno for a shot in the slot that beat Rangers goalie Igor Shesterkin. Olli Maatta also recorded an assist on Veleno’s second goal of the season.

After chasing down a loose puck along the wall, Larkin worked the puck to Raymond in the slot. Raymond, who quickly repositioned his body to receive the pass, converted a one-timer to put Detroit ahead.

Chris Kreider tipped in Artemi Panarin’s pass from above the right faceoff circle on a power play.

The Rangers reclaimed their lead when Adam Fox retreived the puck from off the boards and put a shot past Husso.

Zibanejad recorded his second tally of the night on a rebound near the Red Wings’ right post.

Julien Gauthiero found the back of the net 46 seconds later for his second goal of the season.

Libor Hajek, assisted by Filip Chytil and Alexis Lafreniere, scored on a shot from the point.

Lalonde on his postgame message

“We have to (forget about Thursday). We did a great job of it in Buffalo. That one stung. Guys were pissed off, but you have to forget about it. We got more injuries and hopefully some guys coming back on this trip. We gotta figure it out from within.”