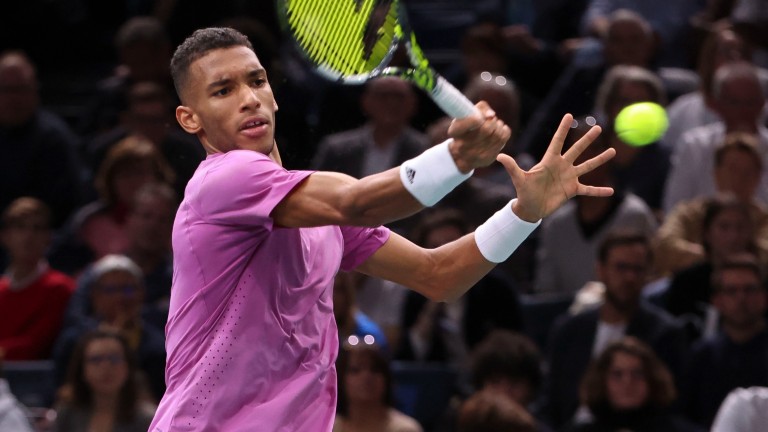 Felix Auger-Aliassime has had a tremendous campaign

Novak Djokovic headlines the ATP Tour Finals in Turin and takes aim at a sixth success in the season-ending celebration, which would move him level on titles in the event with Roger Federer.

Defending champion Alexander Zverev and world number one Carlos Alcaraz are notable absentees, which has left Djokovic as the 11-8 favourite to reign supreme.

The slick Serb has had an indifferent season but being forced to miss two of the four Grand Slam events means he is fresher than most, something that has been evident in recent months.

Djokovic claimed successive titles in Tel Aviv and Astana in October before finishing runner-up at last week’s Paris Masters, in which he was defeated in a deciding set by rising Danish star Holger Rune.

The 35-year-old is housed in the Red Group alongside Daniil Medvedev, Stefanos Tsitsipas and Andrey Rublev and is expected to prevail, but perhaps the biggest challenge to his supremacy comes from the Green Group.

While it’s true that Djokovic is in excellent shape, the same can be said of classy Canadian operator Felix Auger-Aliassime, whose form has taken off in recent months.

The Montreal man started the season without an ATP Tour title to his name and had lost in all nine finals he had contested.

However, Auger-Aliassime broke that duck when winning his maiden title in Rotterdam in February and that has spurred him on to record further success.

The 22-year-old lifted a trio of titles from mid-October onwards in Florence, Antwerp and Basel and was unfortunate to bump into a determined Rune in the semi-final in Paris last time out.

That means FAA has won 16 of his last 17 matches and he must be delighted with his draw as none of his three Green Group rivals appear to be operating anywhere near their best.

Quotes of 8-1 about Rafael Nadal may catch the eye but the Spaniard, who returned to action for the first time since September’s US Open at the Paris Masters earlier this month, has to prove his well-being.

Nadal was beaten by Tommy Paul in his opening match in the French capital and has yet to win the ATP Finals in ten previous attempts, so with match sharpness to prove he can be taken on.

Casper Ruud is a two-time Grand Slam runner-up this season but his form has tailed off – he has lost four of his last five matches – while Taylor Fritz suffered a surprise defeat to French veteran Gilles Simon in the opening game of his Parisian adventure.

That makes Auger-Aliassime the man to beat in the Green Group and from there, with confidence rocking, he could take some stopping.

CLICK HERE FOR YOUR CHANCE TO WIN A 65″ TV