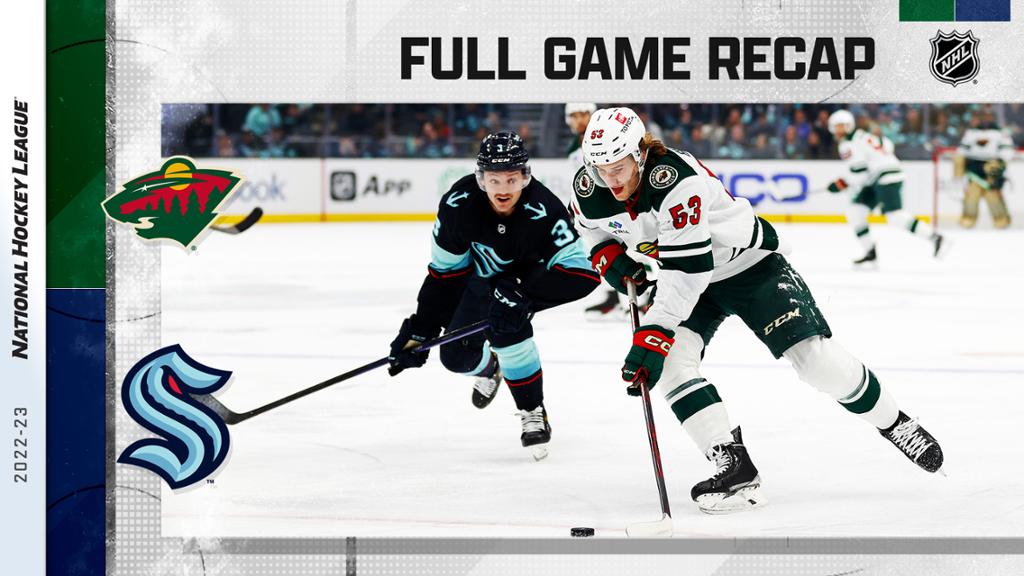 “Obviously, [Fleury] was real good, but I think everybody in front of him was really committed,” Minnesota coach Dean Evason said. “A lot of blocked shots (22), he did a lot of good things. Certainly, when we broke down, he was there to bail us out.”

It was Fleury’s first shutout with the Wild and 72nd in the NHL. The Kraken are the 28th franchise Fleury has shut out to pass Ed Belfour, Dominik Hasek, Martin Brodeur and Tomas Vokoun for the most in NHL history.

Mats Zuccarello scored his sixth goal of the season for the Wild (7-6-1), who finished 2-1-0 on their road trip.

“We played our game, it was a gritty game,” Minnesota defenseman Jacob Middleton said. “It was a perfect road game for us. All the lines were doing their job and playing exceptionally well. The defense, the goalie, everyone I thought was great tonight. To win a game 1-0 like that at the end of a road trip is a great win for us.”

Martin Jones made 20 saves for the Kraken (8-5-2), who had a string of 10 games in a row in which they scored three goals or more end.

“Both teams do a pretty good job of limiting opportunities and they found one off a turnover in the first period,” Seattle coach Dave Hakstol said. “We didn’t get enough from the inside. In the third, we had three or four good looks from inside and just couldn’t find one off a rebound. We couldn’t find a way to get one in behind, so it’s that kind of night, you know? We’ve got to find a dirty one, a greasy one somewhere, and we weren’t able to do that tonight.”

Zuccarello made it 1-0 at 18:19 of the first period when he picked up a pass from Jon Merrill off the half boards and scored with a wrist shot from the slot. It was Merill’s first point of the season.

“Power-play wise, probably what stands out is I think we lost each opening face-off,” Hakstol said. “You’re going to have nights where that’s how it goes for the power play.”

NOTES: Fleury had 44 shutouts with the Pittsburgh Penguins, 23 with the Vegas Golden Knights and four with the Chicago Blackhawks. He passed Harry Lumley and Lorne Chabot for 12th place in NHL history. Belfour and Tony Esposito are next with 76. … Wild forward Marcus Foligno had four hits in 16:21 after missing five games with a lower-body injury. … Kraken forward Jared McCann returned after missing three games with a lower-body injury. He had two hits in 15:49. … Seattle defenseman Cale Fleury had two shots and three hits in 13:09 in his season debut. … Kraken defenseman Adam Larsson played his 700th NHL game. … Magnus Hellberg, claimed off waivers from the Ottawa Senators on Thursday, was the backup to Jones. … Seattle forward Morgan Geekie had a five-game point streak end (three goals, three assists). … The Kraken hadn’t scored fewer than three goals in a game since Oct. 17, a 5-1 loss to the Carolina Hurricanes.