Nick Ball Demolishes Jesus Ramirez Rubio in One Round 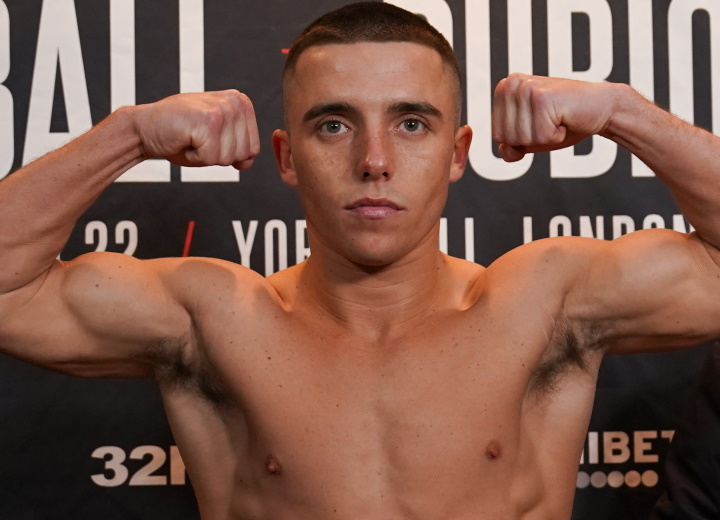 Nick Ball made short work of overmatched Mexican Jesus Ramirez Rubio, who was stopped in 108 seconds of the first round at York Hall in London.

Rubio was a late substitute for unbeaten Panamanian Rafael Pedroza and he never looked likely to put a dent in the Liverpudlian’s recent career momentum.

In the brief time it lasted, Rubio was on the floor three times. The action had only been going for 50 seconds when Ball landed a big left hook on the taller Mexican and sent him sprawling to the canvas.

He repeated the trick moments later, landing a left hook to the body and then the head again, which sent Rubio over on his back.

Referee Victor Loughlin allowed it to continue, but a left-right-left had him over again. Loughlin waved him back in again, but as a left landed hard, he dived in to stop it.

The WBC silver featherweight belt was on the line as Ball moved to 17-0.

“It is going to be a big 2023,” Ball said. “I’ve just got to keep winning, keep staying active, keep getting the fights in and keeping putting statement performances on like that. Only good things are going to come.”

Another quick winner against Mexican opposition was heavyweight hope David Adeleye, who stopped Elvis Garcia in the second round.

After taking the first two minutes to find his range, Adeleye tagged Garcia with a right uppercut, but after he landed a solid right in the early seconds of the second round, Garcia started to fall apart.

Adeleye started to open up and a two-fisted onslaught, finished with a left hook, sent Garcia crashing down. Garcia beat referee Kieran McCann’s count, and he tried to swing his way out of trouble, but another big right sent Garcia down in the corner.

He beat the count again and tried to fight back, but another left hook hurt him before a right sent him down for the third time, prompting McCann to stoop it at 2:27.

Willy Hutchinson was boxing for only the second time since being upset in a British super-middleweight title fight by Lennox Clarke 20 months ago, stopped Italy’s Luca Spadaccini.

Hutchinson was on top throughout and slowly battered the resistance out of the Italian, although it took until the seventh round for Spadaccini to finally break, as a left hook and a right hand sent him to the floor, prompting referee Lee Every to wave it off.

There were also decision wins on the undercard for unbeaten prospects Umar Khan, Carl Fail and Sean Noakes, while cruiserweight Aloys Youmbi stopped Pawel Strykowski in the second round.

Ron Lewis is a senior writer for BoxingScene. He was Boxing Correspondent for The Times, where he worked from 2001-2019 – covering four Olympic Games and numerous world title fights across the globe. He has written about boxing for a wide variety of publications worldwide since the 1980s.