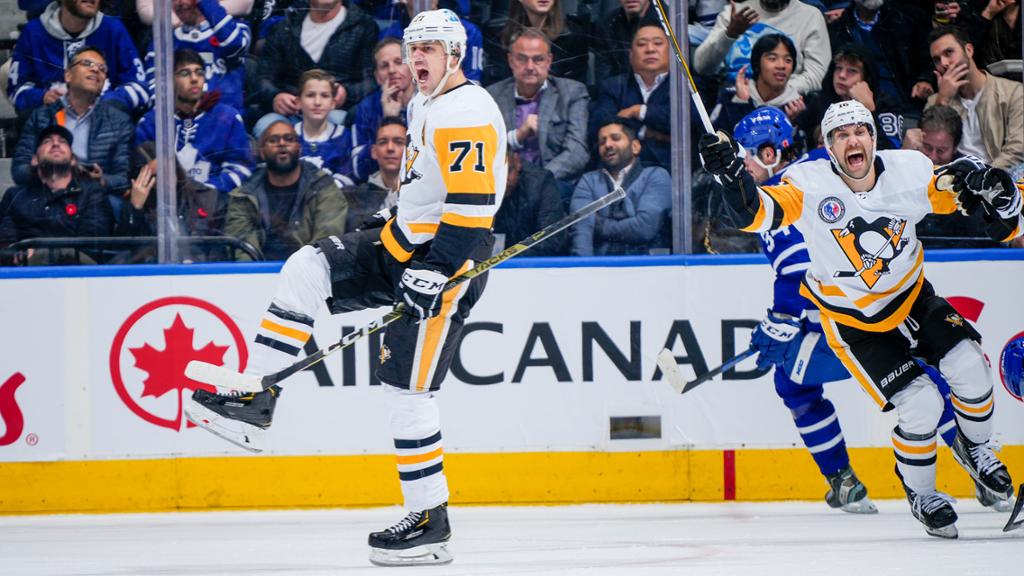 After the Penguins broke their 0-6-1 winless streak on Wednesday in Washington, their goal was to follow it up and gain some momentum on Friday in Toronto. They ended up skating out to a 4-2 win against the Maple Leafs.

P.O Joseph missed tonight’s contest after leaving in the second period of Wednesday’s game. Chad Ruhwedel slotted into his spot alongside Jan Rutta on the third D-pairing. That was the only change the Penguins made to their lineup.

Former Penguin Zach Aston-Reese got Toronto on the board first before Malkin – who had been called for two penalties in the first period – showed his thanks by getting a huge late goal. The Penguins carried that momentum into the second period, with Geno setting up linemate Jason Zucker for a one-timer tally. And while the Maple Leafs responded with a power-play goal, the Penguins put on an absolute defensive clinic in the third period and got two goals to boot to earn the two points.

Here’s what Penguins head coach Mike Sullivan had to say after the game.

Where does that third period stand in terms of the way you guys want to play when you have a lead on the road? “I thought it was a real solid period from our standpoint. Just from a structure standpoint, I thought we did a great job in the neutral zone. Trying to take some of their speed away, forcing them to have to dump pucks as opposed to carrying pucks, and I thought we did a good job executing the breakout.”

What have you thought about Brock McGinn lately, and specifically, the play he made tonight? “I think he’s been much better the last few games, just playing with more urgency, more physicality. He’s been better on the penalty kill. He’s doing a lot of the little things. Blocking shots, the wall play. And you know, it’s amazing when you when you do the little things, you get rewarded. You get opportunities to score. The goal that he scored in third period was a result of the neutral zone, just with some decent structure in the neutral zone, forcing the turnover and creating counterattack opportunities. So I think he’s playing a much different game, and I think that’s when Brock is at his best.”

As a coach, do you think you’d like to see Evgeni Malkin play angry more often? “Well, I thought he was in beast mode tonight, it seems. You know? He was a threat all night long. When’s at his best, when he plays the game like we’ve all grown accustomed to watching him over the years, the puck just follows him around. I thought it was one of those occasions tonight. He scores, he had a bunch of looks. I thought his line was really a threat most of the night, and when we get that going – whether it’s Sid’s line or Geno’s line or Carts’ line – when we get the balance, I think that helps us sustain winning. Geno’s a big part of that.”

That particular line has developed more chemistry over the last few games. What made you think they’d be a good threesome? “I just think we’re trying to find guys have complementary skill sets. Raks is a really talented guy, very good off the rush, sees the ice well, is a good playmaker, and can finish. Geno, from an offensive standpoint, he can play any game you want to play. He’s a generational talent. And I think Zuck’s a guy that plays on a north-south, straight-ahead game that’s good in the battle areas and goes to the net front. So I think it has the ingredients of being a decent line, and that’s some of the things we talked about when we put it together.”

Have you been pleased with Marcus Pettersson‘s transition to the top pairing? And if so, do you think it’s a duo that might be able to stick long-term? “We’ve been pleased with his game. That’s why we’ve kept it the way we’ve kept it. I think Marcus has been our most consistent defenseman, and he’s been he’s playing that way game in and game out. He’s a real competitive guy. He’s a good two-way defenseman on both sides of the puck. He does everything pretty well. He’s competing hard, and that’s what we love about it. So I think he continues to bring consistency to his game, and he’s deserving of that opportunity. He’s earned that.”