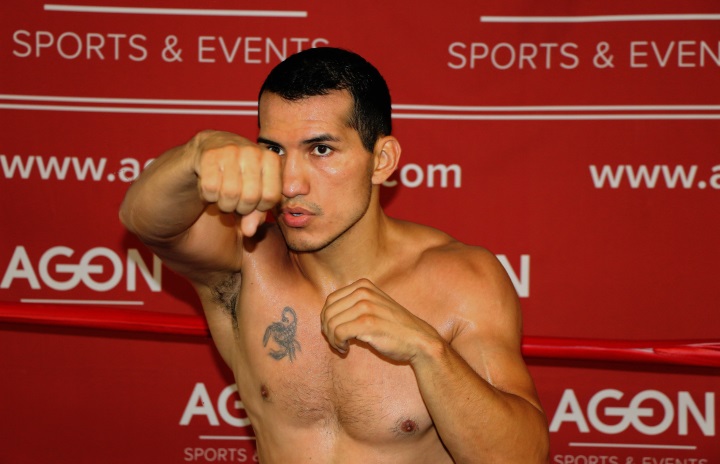 Berlin, Germany – AGON Sports returned to the AGON Sportspark (actually a tennis court) for tonight’s show with seven fights on the bill and it was streamed live by the AGON network.

IBF # 2 junior middle “Golden” Jack Culcay (32-4) kept busy with an eight-rounder against Italian Damiano Falcinelli (15-2). Culcay’s class and experience showed as he dominated the fight. However, Falcinelli gave it everything he had, slugged it out in long bursts of wild punches and some hooks caught the former world champ, who however kept his cool, kept working the body and stayed in control.

But Culcay was forced to give everything he had in a very entertaining fight. BoxingScene had it 80-72 for Culcay but the judges had it closer at 79-73, 77-75 and 79-76 – which means that the many clean punches “Golden Jack” scored with apparently didn’t count.

IBF # 1 super middleweight and mandatory challenger for Saul Alvarez, William Scull (20-0) got a good workout from Argentinian veteran Abel Adriel (26-26-3) and won a unanimous decision after eight rounds. Adriel was in it to survive and did well in doing that while Scull seemed content with getting rounds under his belt.

Big heavyweight Granit Shala (13-0) again showed good skills but also that he isn’t a puncher and outscored Venezuelan, now based in Ecuador, Luis Jose Marin Garcia (9-4) over ten. Garcia was hurt in the fifth and also suffered a cut kept coming with wild swings that never landed.

Cruiserweight Tahir Karovic (19-0) stopped Hungarian journeyman Attila Koros (16-31-1) at 1.18 of third. Koros was floored twice in the third and then both were badly cut after what looked like an accidental clash of heads and the ringside physician ruled out Koros, who slugged it out against the much bigger Karovic a/k/a Tommy Punch, and landed a few, but Karovic’s power and strength told.

Welterweight Nathanael Lukoki (7-0) outboxed Pole Jakub Laskowski (4-19-1) in a fast paced eight-rounder but could never hurt his opponent. Laskowski kept switching to southpaw and back and gave the young prospect a good learning fight.

Middleweight Thomas Piccirillo (11-0-4) opened the show with a unanimous decision over Frenchman Nourredine El Goumi (4-13-1). El Goumi was floored in the first and fourth but gave Piccirillo a tough, good fight all the way. Piccirillo will now be named official challenger for the EU title held by stable mate Bjorn Schicke.