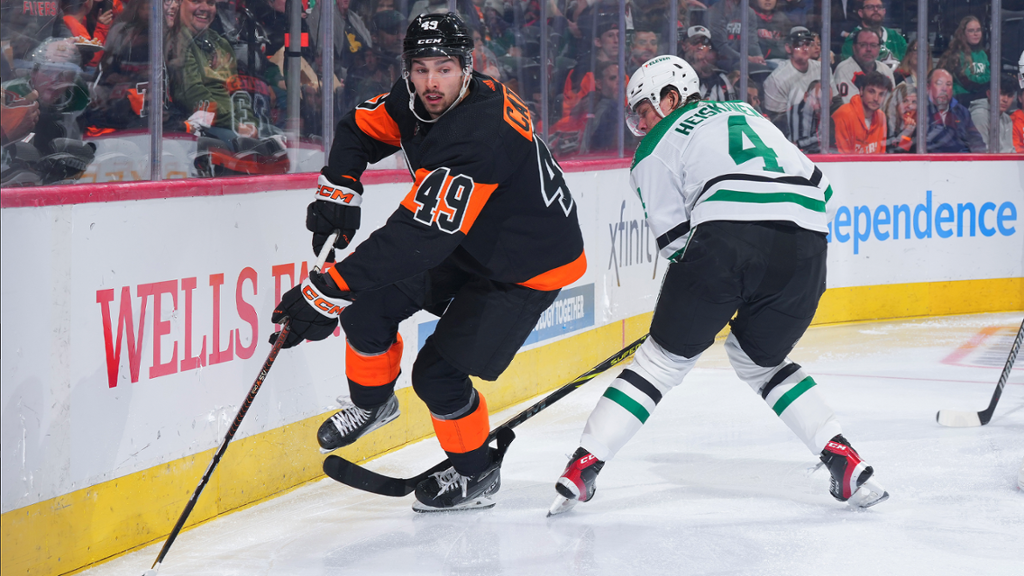 The Philadelphia Flyers lost to the Dallas Stars, 5-1, at the Wells Fargo Center on Sunday afternoon. For the second straight game, special teams contributed heavily to the Flyers’ demise.

Although game play was pretty even through 40 minutes, Flyers trailed 2-0 after the first period and 3-1 after the second. An early third period power play rapidly turned into a backbreaking shorthanded goal by the Stars before the Stars added even further to their lead.

Matej Blumel (1st goal) opened the scoring just 2:36 into the Flyers. The Flyers got a reprieve at 5:16 when a would-be Tyler Seguin deflection goal was overturned upon a coach’s challenge for being offside. Dallas nevertheless exited the period with a 2-0 lead on a deflected point shot goal by Esa Lindell (2nd).

Felix Sandström took the loss in goal. He didn’t get much help in front of him on multiple occasions. He finished with 26 saves on 31 shots. Dallas counterpart Jake Oettinger was sharp in a bounceback performance from yielding five goals. Oettinger stopped 37 of 38 Flyers shots.

The Flyers went 0-for-6 on the power play with a shorthanded goal allowed and a failed 59-second two-man advantage. The Stars were 2-for-4.

The Flyers spent virtually the entire afternoon chasing the game. Special teams failures by Philly were what determined this one, plain and simple. It put them out of the game.

1. Owen Tippett took the puck hard to the net on the game’s first shift. Bur it was Dallas that drew first blood at 2:36. DeAngelo whiffed on a dumped in puck by Esa Lindell and moved over to Seguin as he flagged down the puck. There was no backchecking support, leaving the home plate area exposed. Seguin passed to Blumel, who put a shift on Sandström and scored.

Seguin scored a deflection goal on a Colin Miller shot 5:16. However the Dallas entry was blatantly offside. The Flyers challenged and the goal was overturned after a quick video review.

Tippett landed a solid hit on Ty Dellandrea just inside the offensive blueline. Oettinger made excellent saves on MacEwen in close and then on a Hayes deflection in close.

Dallas got the game’s first period play at 12:41 as Konecny was called for hooking Seguin in the Philadelphia offensive zone. Philly killed the penalty.

Sandström made back-to-back 10-bell saves on Joe Pavelski and Roope Hintz to keep the score 1-0. However,Dallas extended the lead to 2-0 at 18:24. A flip shot from the left point by Lindell hit Braun in the midsection and deflected into the top part of the net on the short side. Jason Robertson and Pavelski received assists.

2. Territorially speaking, the first period was even. Shots on goal were 12-12 (shot attempts were 25-21 Dallas overall but 21-21 at five-on-five). Scoring chances were 11-10 overall Flyers (high danger chances 5-4 Flyers). However, Dallas had the edge in the only place where it truly mattered: the scoreboard. The Stars won 16 of 21 faceoffs.

3. The Flyers jumped on the Stars immediately in the second period. Tippett was whirling dervish through the neutral zone and entry and then started a tic-tac-toe sequence that cut the gap to 2-1 at the 54-second mark. Tippett made a turn-around pass to Hayes, who moved the puck over to Konecny, who buried the puck in the back of the net.

Just seven seconds after play resumed, the Flyers went on their first power play when Seguin was sent off for interference. The Flyers were unable to capitalize on a chance to quickly get the game tied.

At 7:51, with a delayed slashing penalty on Bellows, Sandström made a close-range save on Robertson. A scrum broke out, but the lone penalty was the original call on Bellows. Dallas cashed in to make it 2-1 at 9:06. Pavelski deflected home a Heiskanen point shot. Jamie Benn got the secondary helper.

The Flyers went back to the man advantage at 12:51 when Joel Kivaranta was whistled off for hooking. The Flyers were unable to solve Oettinger. Frost, after a lengthy puckhandling sequence, circled around the net for a scoring chance before the penalty expired.

4. Play got pretty loose at times in the second period with both clubs yielding open looks from the slot. Shots on goal were 12-9 Flyers (22-16 Flyers in shot attempts). Scoring chances were 12-9 Flyers (6-6 tie in high-danger looks).

5. The Flyers went to their third power play of the game 47 seconds into the third period. Veteran defenseman Ryan Suter grabbed hold. Just 10 seconds into the man advantage, the Flyers coughed up a shorthanded 3-on-2. Glendening had free reign across the slot and deflected home a Dellandrea setup. Lindell got the secondary assist at 0:57.

At 5:26, Philly went back to the power play as Seguin tripped up Konecny. The Flyers had possession the entire time, moved the puck well, had several good looks at the net but couldn’t finish any off.

Dallas had some extended puck possession in the Flyers zone and the shift ended with Sanheim being called for hooking at 9:04.

Miller was called for delay of game at 16:54 after putting the puck over the glass from the defensive zone. It became a 59-second 5-on-3 with 2:05 left. Kiveranta was called for tripping 17:55.