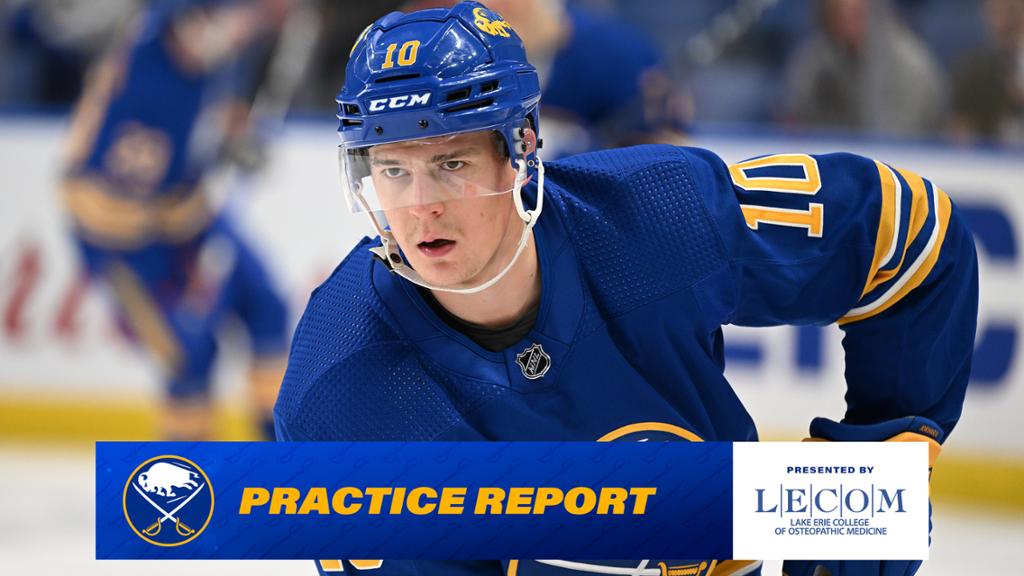 Henri Jokiharju has been cleared for full activity and could return to the Sabres’ lineup this week, the team announced following practice at KeyBank Center on Monday.

Jokiharju sustained a facial fracture when a puck was shot off his mouth during the Sabres’ game in Calgary on October 20.

The Sabres conclude their current four-game homestand on Tuesday against the Vancouver Canucks, then begin a run of three straight road games the following night in Ottawa. They conclude the week in Toronto on Saturday.

While Jokiharju’s return represents a step toward full health for the defense corps, the Sabres forward group was missing two players for practice. Kyle Okposo (general soreness) remained absent after missing the game on Saturday and is considered day to day. Jack Quinn (undisclosed) was being evaluated for an injury and is unlikely to play this week.

Sabres coach Don Granato said the team will call up at least one forward – and possibly two – from Rochester. Buffalo practiced with 11 forwards on Monday.

1. Here’s how the group lined up, with Jokiharju skating on a defense pair alongside Jacob Bryson.

2. Jokiharju ranked second on the Sabres in average ice time last season, behind Rasmus Dahlin. He averaged over 20 minutes in three games this season prior to his injury.

The Sabres have been without him and another 20-plus minute defenseman in Mattias Samuelsson, who could resume practicing this week.

“That is a lot of hockey,” Granato said regarding Jokiharju’s ice time. “To have a guy that can give you more stability for 25 minutes is significant.”

While Jokiharju’s eventual return will add experience to the defense corps, Granato also urged patience as he returns to form following a month-long absence.

“He hasn’t had a lot of practice and this is probably a supplement to his practice, getting back in there to get back up to his form,” Granato said. “So, I don’t want to put a lot of pressure on him, obviously. But he’s a talented guy and that will be a big help to have him back.”

3. The Sabres are 0-5-0 in their last five games, including tightly contested matchups with four of the NHL’s top teams in Carolina, Tampa Bay, Vegas, and Boston.

The priority through it all has been consistent – stay in the moment, focus on daily improvement, and trust in their identity.

“This is experience,” Granato said. “Unfortunately, this is experience. So, you can’t let it break you. It breaks lots of teams. It breaks lots of players. That’s the history of sports. We will not let it break us. We’re just going to go steadfast in what we do. We know it’s going to work. It will work, we know it 100 percent. Just keep doing it.”

4. Tage Thompson is tied for third in the NHL with 11 goals after scoring a highlight-reel, shorthanded goal against the Bruins. We asked members of the Sabres defense corps what makes him difficult to defend, which you can find in the video below.