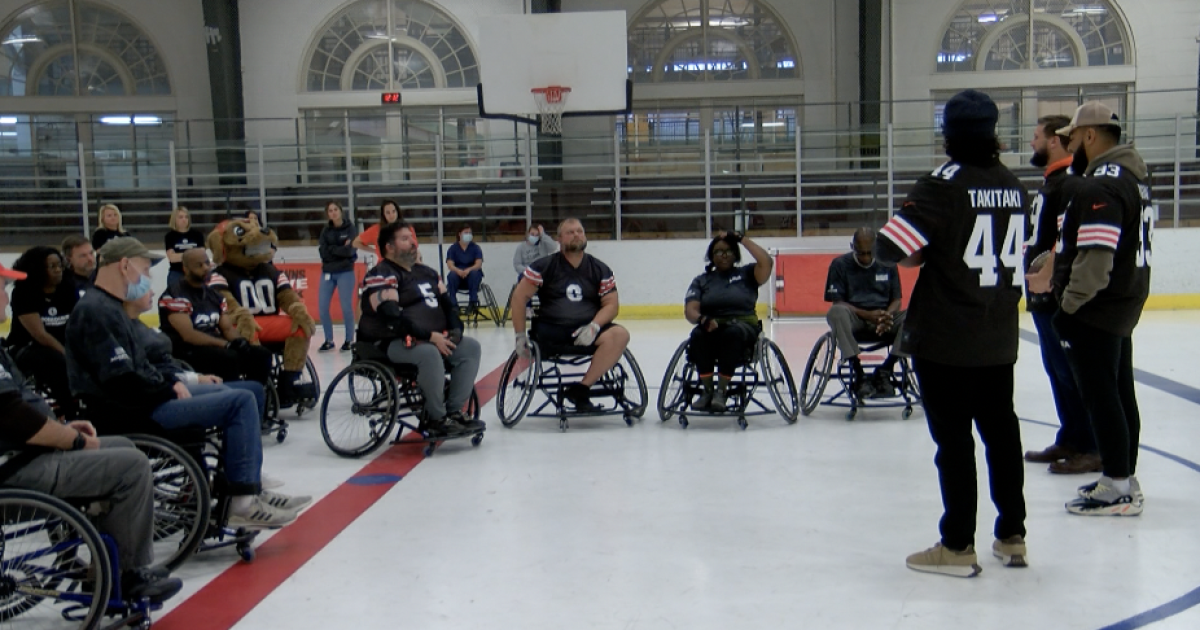 CLEVELAND HEIGHTS, Ohio — The Browns have had a mission to support their Salute to Service campaign this month, and on Tuesday they did so by spreading the love of the game through wheelchair football—inviting veterans and members of the Adaptive Sports Ohio team to be joined by a few Browns players.

Linebacker Sione Takitaki, defensive end Chase Winovich and defensive tackle Tommy Togiai popped by the Cleveland Heights Community Center where they met military veterans and members of the Adaptive Sports Ohio team. The players met with the group and worked through drills before getting to see them in-game action.

Before they broke off for individual drills, the players were surprised to learn the intricacies of NFL football carry over into the wheelchair league as well, hearing about their blitz packages and edge rushing technique and how the game is just slightly changed to adapt to their use of wheelchairs.

“Having some fun. You see Chase, Takitaki, we’re having just a good time with the veterans. It’s been a great time getting to know them and playing the game with them, seeing some awesome skills out here,” Togiai said. “It’s awesome to see those guys, they go really hard. Seeing the routes and the rushing, all the edge rushing, it’s kind of cool.”

The Browns were off from practice on Tuesday but still made it out to the event, using their time away from the facilities to connect with the community and take time to appreciate the United States military, veterans and their families.

“To be able to give back to some of these veterans and show them how much appreciation we have and our fans have, really means a lot to us. And then just to be,” said Browns Community & Corporate Communications Director Rob McBurnett. “And then just to be able to boost spirits and bring this energy in this competitive environment, our players are having a great time. They love football, everybody loves football and it’s just an awesome opportunity to bring people together.”

While they were running through group drills, one player made her presence known—by everyone in the room—with her football skills, grit and witty personality.

“Believe it or not today was my first day picking up a football. We were with the little Cleveland Brownies and I got in their business but it was pretty good, I enjoyed it” said Tiffaney Davison, United States Army veteran, who was full of enthusiasm and spunk all day, knocking her chair around to make plays and dominating the pick-up game. “It still tells me I can do this no matter what my injury is, I can still do this.”

Davison made sure to impress Takitaki, Togiai and Winovich—making sure they knew she had skill just like them.

“Let me tell you, you may do this professionally but we got this with even half your body. They got two legs and we’re sitting, we’re using half of our body to do this,” Davidson said humorously.

Takitaki, Winovich and Togiai met each player with a smile on their face and enthusiasm to get involved in the game—even holding a Q&A where they shared their background, tips on staying mentally sound through adversity, and where Winovich confessed to playing the Powerball lottery because “you can’t win if you don’t play.”

But the guys also made sure to get loud on the sidelines once the game began, cheering on the players as they gave them a scrimmage look at game action.

The event not only gave the Browns players a chance to check out the Ohio Adaptive Sports League and connect with the community, it also offered veterans in the area a chance to try out wheelchair football and see if it’s something that might interest them.

And for Davison, you can bet you won’t see the last of her with the pigskin in her hands.

“Apparently they want me to try out for the Cleveland Browns wheelchair football team and I’m pretty sure I’ll do it amongst the many other adaptive sports that I do,” Davison said.

Download the News 5 Cleveland app now for more stories from us, plus alerts on major news, the latest weather forecast, traffic information and much more. Download now on your Apple device here, and your Android device here.