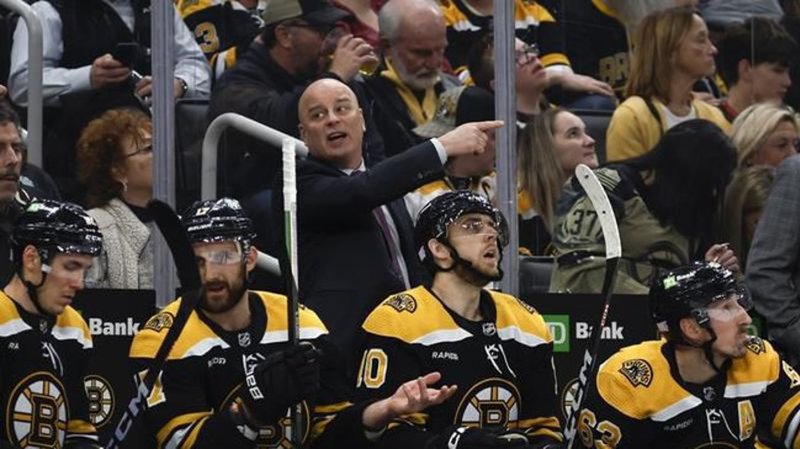 “And a tweak here and there … you see the results.”

Plenty of NHL clubs with new coaches are pleased with 2022-23’s early returns.

Of the 10 hires or promotions made over the off-season, the Bruins, Vegas Golden Knights and Dallas Stars lead their divisions, while the Winnipeg Jets and New York Islanders occupy No. 2 seeds.

The Florida Panthers were also in a playoff spot heading into Wednesday’s action, while the Detroit Red Wings, Chicago Blackhawks, Philadelphia Flyers and San Jose Sharks were within striking distance five weeks into the schedule.

Cassidy has since found a home with a Vegas group that watched Peter DeBoer — now in Dallas — walk the plank following an injury-riddled 2021-22.

“The message was we’ve got to get back to the Vegas Golden Knights identity,” said Cassidy, whose team is third in the NHL at 13-4-0. “I have a good idea of what I want it to look like — players have to want the same thing.

Vegas winger Jonathan Marchessault said a new coach’s success often comes down to small details out of the spotlight.

“Hockey players, we know a lot about hockey,” he said. “It’s all about having good communication with the coaching staff. All those little things that makes it a better situation.”

Philadelphia got off to a good start under John Tortorella, but has dropped four in a row. The fiery bench boss said recently there’s no formula for how long it takes a roster to coalesce with a new vision.

“Different for every team, every situation, every player,” he said. “I know the group’s trying.”

“He holds people accountable,” he said. “Put your head down and go to work.”

“For some guys, it’s a fresh start,” he said. “For other guys, it’s re-establishing yourself.”

Bergeron, whose club hit 100 points four times with Cassidy and made the 2019 Stanley Cup final, said despite sustained success there’s often a point where change is necessary to push forward.

Cassidy, meanwhile, has gone from an organization with sky-high standards to one with perhaps even less wiggle room led by title-craved owner Bill Foley.

“Bill came out his first year and said, ‘Hey, we’re gonna make the playoffs (and) we’re gonna win the Cup in Year Six,’” Cassidy said before adding with a grin: “Someone reminded me this is Year Six.

“We gotta get going.”

At the other end of the spectrum, a couple of coaches find themselves in uncomfortable situations.

Asked post-game if it was a result he thought he absolutely had to have, Boudreau replied with a smile: “Yeah, I did … for a couple reasons.”

D.J. Smith of the Ottawa Senators, who hosted the Sabres on Wednesday, is also under the microscope, but general manager Pierre Dorion has backed the coach of his 30th-ranked team.

The Hockey Hall of Fame inducted its latest class Monday, so who’s likely to get the nod next November?

Henrik Lundqvist should be a slam-dunk in his first year of eligibility, but the floor is fairly wide-open after that.

Henrik Zetterberg missed out in his first year of eligibility, while Alexander Mogilny (2009), Curtis Joseph (2012), Jeremy Roenick (2012), Rod Brind’Amour (2013) and Keith Tkachuk (2013) are among the other former NHLers patiently waiting for their phones to ring.

On the women’s side, Caroline Ouellette, Jennifer Botterill and Meghan Duggan should again be in the mix, while Nashville Predators general manager David Poile’s long career could see him elected as a builder.

This report by The Canadian Press was first published Nov. 16, 2022.