RECAP: Panthers refuse to quit, show lots of fight in loss to Stars 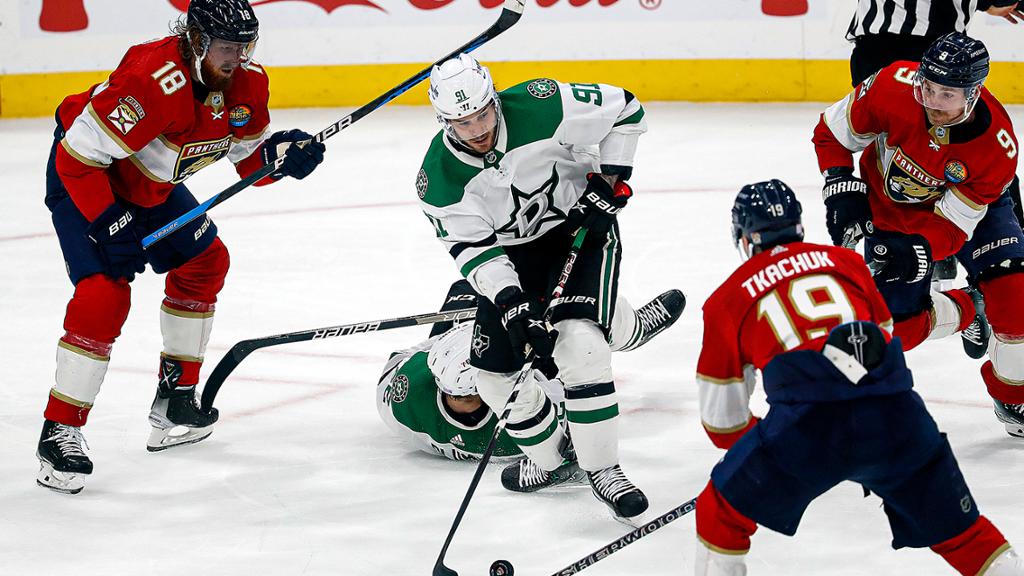 SUNRISE, Fla. — Even after falling behind 4-0, the Florida Panthers refused to roll over and instead showed plenty of fight during a 6-4 loss to the Dallas Stars at FLA Live Arena on Thursday.

“It shows that we have that will to win and that compete,” said Panthers forward Sam Bennett, who had three assists. “We’re never going to give up and we’re going to fight right until the end.”

Taking the ice without superstar captain Aleksander Barkov, who missed the game due to a non-COVID illness, the Panthers fell behind early when Roope Hintz roofed a shot past Sergei Bobrovsky on a 2-on-1 rush to give the Stars a 1-0 lead at 4:58 of the first period.

Later in the period, the Stars struck twice within a span of just 37 seconds to increase their early lead. After Nils Lundkvist drove to the net and beat Bobrovsky from a sharp angle to make it 2-0 at 15:16, Jamie Benn went five-hole on a breakaway moments later to make it 3-0 at 15:53.

With 8.3 seconds left in the period, Tyler Seguin’s breakaway goal made it 4-0.

At the start of the second period, Spencer Knight relieved Bobrovsky in net.

“We haven’t had a night like that in the first period,” Panthers head coach Paul Maurice said. “When that first period’s done, you don’t have a lot of options, right? It’s hard to do what [our] team did tonight, to slowly start to grind and get stronger and start to push back and to fight.”

And fight they did.

Increasing his team-leading goal total to 11, Carter Verhaeghe got the Panthers on the board just before the midway point of the middle frame when he picked a corner and beat Scott Wedgewood from the left circle on the man advantage to trim the deficit down to 4-1 at 7:29.

Set free after Jason Robertson intercepted a clearing attempt, Hintz got behind the defense and beat Knight in a 1-on-1 battle to make it 5-1 at 10:56. Answering for Panthers, Eetu Luostarinen took a slick saucer pass from Bennett and beat Wedgewood on a 2-on-1 to make it 5-2 at 12:12.

After sprawling out to make spectacular back-to-back saves on the penalty kill, Wedgewood fell to the ice in pain and was unable to get back up. Following a long stoppage, he was stretchered off the ice to the sounds of stick taps from both his teammates and the Panthers.

In Wedgewood’s place, Jake Oettinger came into the game to man the net for Dallas.

Staying red hot on the power play, the Panthers made it a two-goal game heading into the second intermission when Sam Reinhart, who led Florida with 16 goals on the man advantage last season, deflected a point shot from Aaron Ekblad past Oettinger to make it 5-3 at 18:27.

“It’s always good to score on the power play,” Ekblad said. “To get that going will help us in the future. It’s important that special teams do a good job, and I thought we did alright tonight.”

Putting the Panthers within striking distance, Bennett, who really stepped up in the absence of Barkov as the team’s top-line center, set up Matthew Tkachuk for a backhand goal in the slot with a tape-to-tape centering feed right as he was getting checked into the boards in the corner.

“Sammy’s a fantastic player,” Ekblad said of Bennett, who skated in the 500th game of his NHL career. “He’s always ready to step up into a bigger role. He plays a strong, hard game. He hits, he scores goals, and he does a great job defensively. You get the full package from him.”

After the Panthers came painfully close to getting the game to overtime in the waning minutes of regulation, the Stars finally shut down the comeback when Ty Dellandrea cashed in on an empty net with 18 seconds remaining in regulation to make it 6-4.

Despite falling to 9-7-1, the Panthers feel they learned a lot in defeat.

“The fact that we can come back,” Ekblad said. “Obviously we didn’t finish it. First periods need to be a little bit stronger. We’ve had a trend of having really good first periods, so it’s not something we want to leak in. It’s something we know can be fixed easily with our game and how hard we jump on teams. Nothing to overreact to, just have to find a way to be a little bit better there.”

“He just wasn’t feeling great even in the last game. He played so well for us, but he wasn’t feeling great. … He got to today and we were expecting him to come in and feel good, but he didn’t. We didn’t want to risk putting him in a game. … Hopefully he feels better tomorrow and we can have him on the weekend.” — Paul Maurice on Aleksander Barkov.

The Panthers (9-7-1) will close out their five-game homestand with a matchup against the Calgary Flames (7-7-2) at FLA Live Arena on Saturday at 4 p.m. ET.