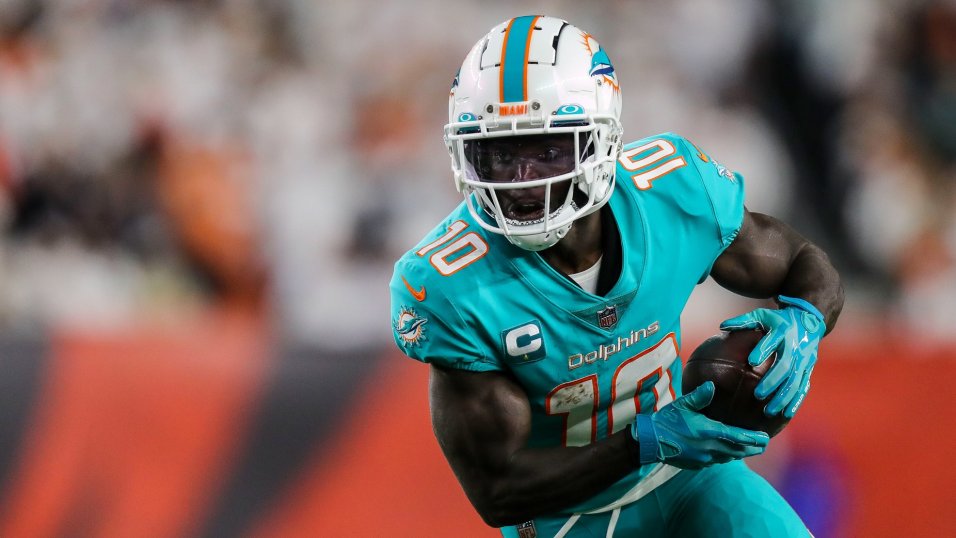 • Pair of Dolphins make the top 10: You guessed it — Tyreek Hill and Jaylen Waddle have been simply unstoppable this year on deep targets.

• Rookie Chris Olave flashing deep-ball chops: The Saints’ up-and-coming star has yet to drop a deep target this season while accumulating the ninth-most yards on such passes.

A deep pass is one targeted 20-plus yards downfield. Here are the NFL’s best receivers in terms of accumulating yards on such plays through Week 10.

Hill currently holds a top-five-ranked 94.8 deep receiving grade. On 23 targets, Hill has caught 14 balls enroute to generating a 115.8 passer rating for his quarterback.

Jefferson’s case as the game’s WR1 is rooted in his big-play ability down the field. He has snagged all but four of his 15 deep targets — including a league-leading six contested catches — while averaging 8.9 yards after the catch total. His 73.3% completion percentage when targeted deep is among the top marks in the NFL.

It’s been a down year for Davis due to injury, but he remains one of the Bills’ primary weapons on deep passes. The third-year man has an impactful 12.7 yards after the catch average and has gone for three scores and six catches on just 12 deep targets.

Scary Terry’s prominence in the passing game continues to be felt downfield for the Commanders’ offense. He’s hauled in all seven of his catchable deep targets, with three of them going for scores. His 94.8 receiving grade on such plays is tied with Tyreek Hill.

Evans hasn’t touched the end zone this year on deep throws, but he still has an 86.6 passer rating on such plays. The nine-year veteran has seven catches from 18 deep targets, although only 10 have been catchable.

Jeudy hasn’t been the most efficient player on his 16 deep targets, but the five he’s hauled in have gone for 43.6 yards per reception. The former first-round selection is averaging 20.4 yards after the catch on such plays, which ranks first in the NFL.

Waddle has thrived in his WR2 role opposite Tyreek Hill and has made the most of his deep targets. The second-year man has caught such passes from just nine targets to generate a 118.8 passer rating.

Olave has snagged only six of his 19 deep targets but has caught 75.0% of his catchable passes. Two of those grabs were contested, and he’s one of five players with 15-plus deep targets to not have dropped any of them.

Lockett is tied for the lead league in touchdown catches on deep targets (four). The wily veteran has snagged seven of his 14 deep targets, helping him achieve a 105.7 passer rating.