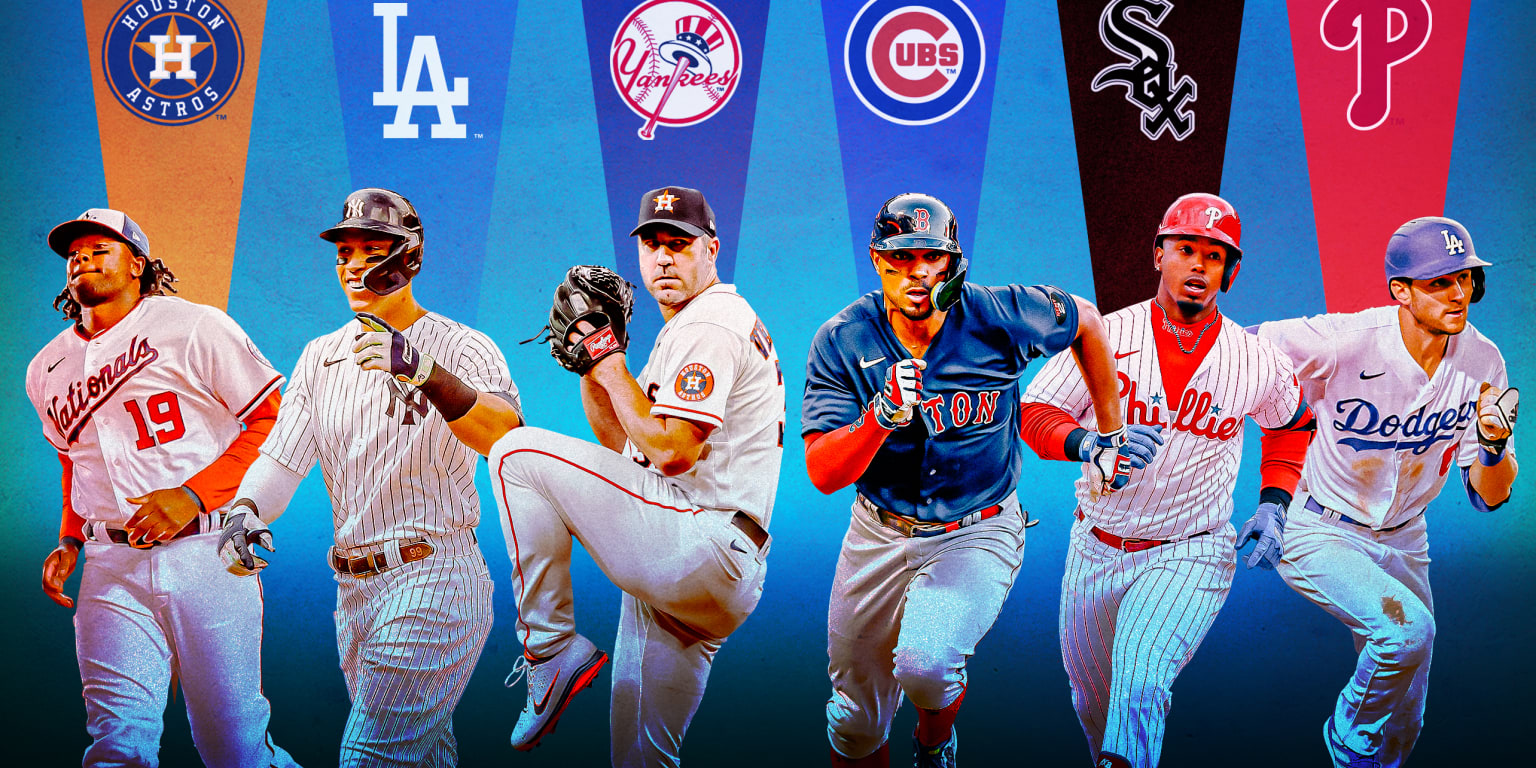 Front-office executives won’t be serenading potential free agents with bad baseball puns sung to the tune of the “Fiddler on the Roof” classic, but they’ll all be trying to upgrade their respective rosters in the coming weeks and months.

With that in mind, it’s time for our annual exercise in which we try to match up free agents with new teams. This list isn’t meant to serve as a prediction of what’s to come this winter, but rather a chance to play free-agent matchmaker.

1. Every player has to be from another team (no incumbents).

2. Each player can only be on the list once.

The Blue Jays’ 3.98 rotation ERA ranked eighth in the AL, but José Berríos (5.23) and Yusei Kikuchi (5.19) had terrible seasons, and Ross Stripling is a free agent. Taillon’s six starts against the Jays (4-2, 2.62 ERA) were more than he made against any team. He actually had better numbers against winning teams (3.74) than losing teams (4.13).

The Orioles’ rotation ranked 10th in the AL with a 4.35 ERA, but Dean Kremer and Austin Voth were the only starters with an ERA below 4.00. Baltimore should look to spend money after its surprising season, and while the club might not be ready to go big-game hunting for Jacob deGrom or Carlos Rodón, a veteran such as Eovaldi would be a good mentor for some of the Orioles’ young arms.

The Rays struggled against right-handed pitching last season, posting a .678 OPS, ranking 11th in the AL. They could try to bring back David Peralta, but the 35-year-old Brantley — who posted an .810 OPS in 189 plate appearances against righties — could be an affordable option after he played in just 64 games in 2022.

Boston’s bullpen was woeful in 2022, ranking 14th in the AL with a 4.59 ERA while blowing 28 saves — third most in the league. No reliever notched more than eight saves last season, so adding a proven closer should be a priority. The 37-year-old Robertson had a strong season with the Cubs and Phillies (2.40 ERA in 58 appearances) and shouldn’t require a lengthy deal, making him an ideal addition for a Red Sox team that has plenty of other areas to address.

With Taillon a free agent, the Yankees will have at least one hole to fill in the rotation. Why not go for the big game and sign Verlander to a Max Scherzer-type contract? After all, the Yankees took a swing when the right-hander was a free agent last winter. A record AAV over two years would give the Yankees a powerful 1-2 punch, reuniting former Astros teammates Verlander and Gerrit Cole.

The Guardians were the league’s youngest team in 2022, and although Josh Naylor and Owen Miller held their own offensively this season, Miller is better suited at second base and Naylor as a designated hitter. Mancini would not only stabilize first base for Cleveland, he would bring some veteran leadership to the young club.

Cueto enjoyed a solid bounceback season in 2022, posting a 3.35 ERA in 158 1/3 innings — the most he’s thrown since 2016. The Tigers have a number of injury concerns in the rotation, so bringing in a veteran starter who can help eat innings would be helpful.

As expected, Carlos Correa opted out of his contract, leaving a hole at shortstop until Royce Lewis is ready to return from injury. Minnesota seems unlikely to invest huge dollars at the position, but Iglesias — who had a 1.0 fWAR in 2022 — would provide a steady presence there, allowing the Twins to take their time with Lewis.

If the Phillies pursue a high-end shortstop in free agency, they could let Segura walk and move Bryson Stott to second base. The White Sox had a paltry .629 OPS from their second basemen in 2022, so adding an offensive upgrade there would seem to be on their offseason wish list.

The Angels’ never-ending search for rotation help is already underway following last week’s signing of Tyler Anderson to a three-year, $39 million deal. It seems unlikely that the club will spend big on somebody like deGrom or Verlander, but adding Quintana — who posted a 2.93 ERA between Pittsburgh and St. Louis in 2022 after struggling with the Angels in 2021 — would help round out a rotation that still needs some help. The Angels could also look at somebody such as right-hander Mike Clevinger.

Yuli Gurriel saw a huge dip in production in his age-38 season, making it unlikely that the Astros will bring him back. That leaves a big hole at first base, one that can be easily filled by Bell and his power bat.

The A’s haven’t had an answer at first base since trading Matt Olson, but they are in rebuilding mode, so a stopgap seems like the play this winter. Aguilar can still hit for power and could slot in somewhere in the middle of a lineup that ranked last in the AL with a .627 OPS.

Mariners left fielders ranked 12th in the AL with a .658 OPS, with Jesse Winker getting the majority of those at-bats. Seattle could lose Mitch Haniger to free agency, opening a corner outfield spot. Benintendi, who won a Gold Glove in 2021 and made the AL All-Star team in 2022, would provide Seattle with a leadoff option, allowing the Mariners to move Julio Rodríguez into the No. 2 or 3 spot in the lineup.

The Rangers plan to spend this offseason, with starting pitching the likely focus. Bassitt is 32-15 with a 3.13 ERA in 68 starts since the start of 2020, throwing a career-high 181 2/3 innings in 2022 for the Mets. Texas is also quite familiar with Bassitt from his years in Oakland; the righty posted a 3.07 ERA against the Rangers in 13 career outings.

The Braves have won five consecutive NL East titles, but it took an epic four-month run to overtake the Mets in 2022. What better way to take aim at a sixth straight crown by poaching deGrom from their division rival? With so many of their homegrown stars signed to team-friendly contracts, the Braves can afford to buy a high-priced star this offseason.

The Marlins have been unable to build upon the momentum of their 2020 playoff berth, averaging 94 losses over the past two seasons. Miami ranked last in the NL in runs scored, and although shortstop wasn’t the only hole in the lineup, the club’s .626 OPS at the position ranked 12th, falling short of the league average by 60 points. Correa had an .833 OPS and a 4.4 fWAR in 2022, prompting him to opt out of his deal with the Twins in search of a long-term contract.

The Mets’ rotation could undergo some drastic changes this offseason as deGrom, Bassitt and Taijuan Walker could all depart as free agents. Rodón’s strong 2022 puts him on the short list of the top available starters, so if the Mets lose any or all of their starters, the 30-year-old would be a good fit.

Washington ranked last in the NL in home runs, and although Gallo’s game certainly has its flaws, there’s no questioning his power. The past year and a half has been a struggle for the 29-year-old, so a one-year deal might be in order to re-establish his value.

Philadelphia’s run to the World Series might suggest that the club doesn’t have much work to do this offseason, but shortstop is a spot president of baseball operations Dave Dombrowski figures to address despite the team’s success. Segura is a free agent, which opens up the possibility of Stott moving to second base. Turner leads a strong crop of free-agent shortstops and is said to favor the idea of returning to the East Coast. He would fit perfectly atop the Phillies’ already stacked lineup.

Utility man Jace Peterson is a free agent, so the Brewers might be in the market for a replacement. Frazier has struggled since being named to his first All-Star team in 2021, making him a solid buy-low candidate. Milwaukee is familiar with Frazier’s work from his days in Pittsburgh, so perhaps the versatile lefty bat could be an asset for the Brewers.

Albert Pujols’ retirement created a need for a right-handed DH bat, so why not bring in a switch-hitting veteran who can lend more depth to the bench? Santana still has strong on-base skills (.376 OBP in 2022) and solid power (19 homers in each of the past two seasons), and with five postseason appearances on his résumé, the 36-year-old can help replace some of the experience that Pujols and Yadier Molina took into retirement.

The Cubs are believed to be one of the teams ready to pounce on this year’s talented free-agent shortstop class, which includes Bogaerts, Correa, Turner and Dansby Swanson. Manager David Ross was Bogaerts’ teammate in Boston during Bogaerts’ first two years in the Majors, so there’s familiarity on both sides.

After ranking 14th in the NL in runs scored, the Pirates will look to bolster their lineup this offseason. First base was a carousel for Pittsburgh in 2022, and although Sanó appeared in only 20 games last season, he could look for a one-year deal to re-establish his value and test free agency again next winter.

Conforto had a mediocre 2021 season, then missed all of 2022 following shoulder surgery, so a one-year “pillow” contract might be his preferred way to rebuild his free-agent value. The Reds’ offense struggled to score runs with regularity in 2022, and although they’re not likely to hand out any multi-year free-agent deals, a one-year contract for a player such as Conforto could give them a valuable trade chip in July.

It seems as though Arizona searches for bullpen help every offseason, and this one will be no different. The bullpen’s 4.58 ERA was more than a half-run higher than the NL average, as Mark Melancon, Ian Kennedy and Noe Ramirez all struggled. Williams has been a starter for most of his seven-year career, but the 30-year-old posted a 2.47 ERA in 21 relief appearances for the Mets in 2022, striking out more than a batter per inning in those 51 innings.

Los Angeles has plenty of its own free agents to deal with this offseason, but the idea of adding Judge to a lineup that led the Majors in runs scored seems unfair. The Dodgers have a ton of money coming off the books, putting them in play for pretty much anybody they want. Judge could play right or center field, and Mookie Betts is open to the idea of a move to second base.

Brandon Crawford has had a lock on the shortstop position in San Francisco for the past decade, but his lack of offensive production was evident in 2022 and he’s signed for only one more season. Swanson has been a key cog in the Braves’ machine the past two years, and Crawford could move to second base for 2023 to open the spot.

The Padres’ rotation posted a 3.80 ERA, which was about a quarter-run better than the NL’s average. But Sean Manaea and Clevinger are free agents and Mackenzie Gore was dealt last summer in the Juan Soto trade, leaving San Diego in search of arms to fill out the rotation. Senga, who posted a 1.94 ERA in Japan in 2022, is a true free agent, so the Padres wouldn’t have to go through the posting process to secure the hard-throwing right-hander’s services.

Rockies center fielders combined for a .632 OPS last season, with Yonathan Daza and Randal Grichuk — who had a cumulative 0.5 fWAR — starting 129 games. Nimmo’s 5.4 fWAR ranked 16th overall in the NL and was second only to Betts among NL outfielders. An above-average fielder, Nimmo would have a major impact on a Colorado team looking for its first winning season since 2018.