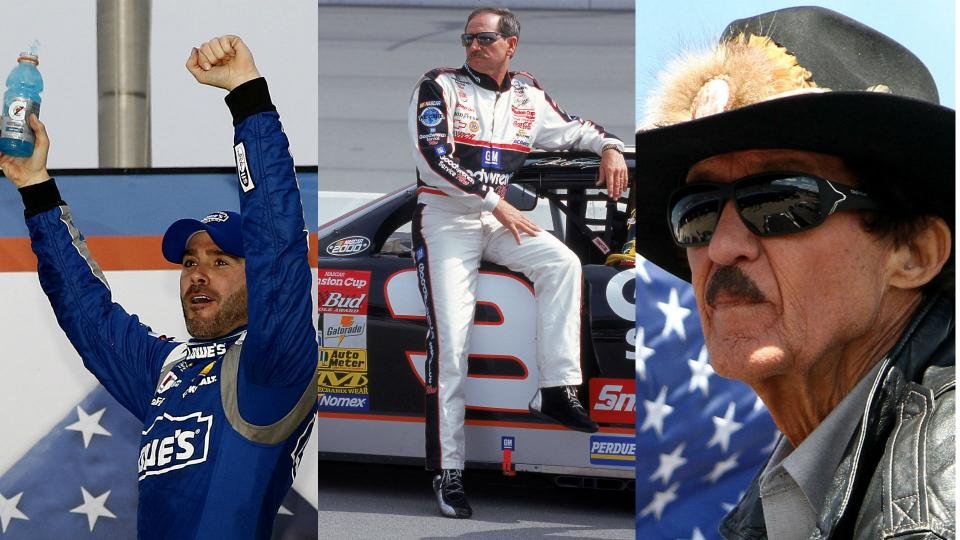 In every sport, there will always be a debate about the ‘Greatest of All-Time’. In NASCAR, the primary contenders are Richard Petty, Dale Earnhardt, and Jimmie Johnson. Unfortunately, Earnhardt is no longer in the mortal realm, but Johnson and Petty are still alive and kicking. Recently, the NBC Sports Twitter handle asked who would win a race between them. The conditions were that all three were in their prime, driving equal cars, and completing 100 laps at Martinsville Speedway.

All three drivers represent different eras in NASCAR and were hugely successful. The statistic of seven Cup Series championships individually prove that they were dominant in their field. However, one wonders who would have been the quickest in equal machinery, and in their prime. It is like trying to compare a prime Ayrton Senna with Michael Schumacher and Lewis Hamilton. Naturally, the fans got in on the act and picked their favorite driver as the GOAT candidate.

According to one fan, Johnson would have got this in the bag, hands down. They said that they were old enough to see all three drivers at the peak of their careers, hence the judgment. Another fan noted that Jimmie Johnson possessed the ability to adapt to any car. This was primarily down to the type of car or the different handling of the machine.

Jimmie. And I’m old enough to have seen all three of them in their prime.

Johnson due to adaptability. Petty and Earnhardt have never proved that they can adapt their driving to different car style or less than perfect handling.

Well I think it would be pretty easy to say Jimmie Johnson because he’s the only one that’s is still racing. Richard Petty is like 80 so he probably won’t be any good and Dale Sr is

However, other people believe that the late great Dale Earnhardt would dial up the intimidation to 11. According to them, Dale Sr. would simply try to spin both of them out and win. Few people even said that Dale Sr. was talented enough to not need to spin them. Petty drove cars with ‘juiced engines’ and Johnson had ‘cheating cars’ were some of the other opinions.

Dale doesnt even need to spin them. He has way more talent than Petty’s juiced engines and Johnson’s cheating cars.

Finally, the Richard Petty camp had a different argument on why their man would win. Some of them simply looked at the track, as Petty boasted of an incredible track record. Both Johnson and Earnhardt had a combined 15 wins, but Petty had 15 wins at Martinsville all on his own. Others acknowledged that Petty had more short-track experience, and finally, some ended it by stating that he was ‘The King’ for a reason.

Jimmie and Dale combined for 15 wins at Martinsville.

Richard ALONE has 15 wins at Martinsville, a record that still stands today.

I think I’ll take The King.

Petty was more of the short track type during his time, so I think he would.

He’s called The King for a reason! Give me Richard Petty all day long!

Sadly, we may never know the answer to this question at all. As mentioned before, all three drivers competed in different eras, with different NASCAR rules, so it is hard to judge. One thing is for sure, this debate will continue to rage on until the end of time.

WATCH THIS STORY: Jimmie Johnson Teases a Return to NASCAR at Much-Anticipated Track Next Year