What to expect on ’90s Night 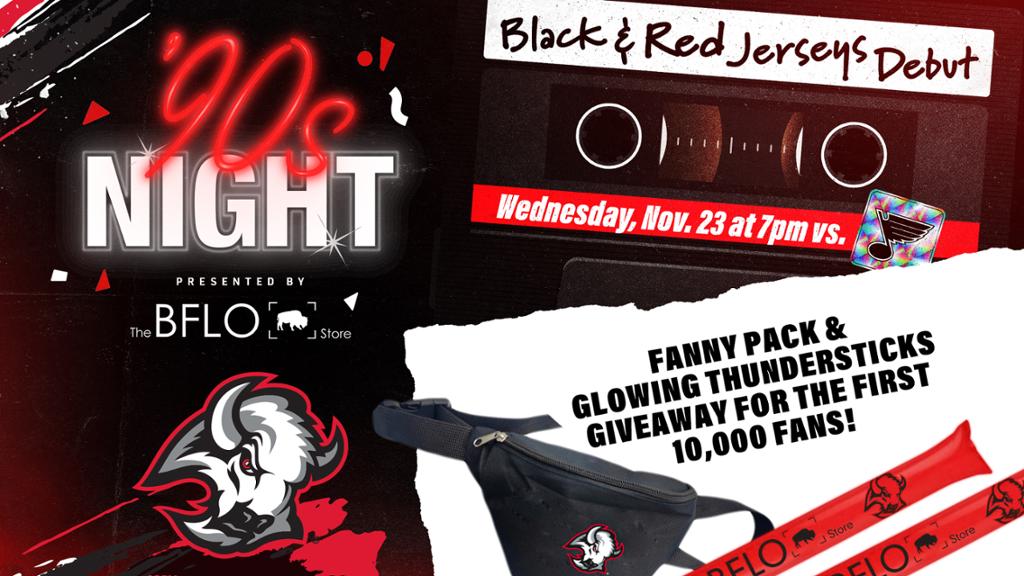 The Buffalo Sabres are turning back the clock on Wednesday for ’90s Night presented by The BFLO Store.

The team will take the ice in their new black and red third jerseys for the first time as they face the St. Louis Blues at KeyBank Center. Faceoff is scheduled for 7 p.m. Tickets are on sale now.

The Sabres will wear the new third jerseys for 12 home games this season.

The first 10,000 fans in attendance will receive red light-up BamBams courtesy of The BFLO Store and a fanny pack featuring the revamped “goathead” logo.

In the arena concourses, fans will be able to take photos in front of ’90s and Sabres black-and-red themed balloon displays.

Music from the decade will be featured and fans should be on alert for other pop culture references throughout the night. Mayday Buffalo will be that night’s house band, playing ’90s music all night for fans.

Select alumni from the ’90s and Nikki the team dog will be in attendance as well.

Fans are encouraged to be in their seats early so they don’t miss a special video open that will play in-arena before faceoff.

Sabres fans also contribute to the “Black and Red Fan Wall” by submitting photos of themselves in black and red Sabres gear. Fans will be entered into a sweepstakes for a chance to win a BFLO Store prize pack, a black and red third jersey, or autographed items. The sweepstakes closes Wednesday at midnight.

Tweet from @BuffaloSabres: Show off your Sabres black & red! Submit a photo for a chance to win ������

For those that can’t attend, pregame coverage will begin at 6:30 p.m. on MSG. Dan Dunleavy and Rob Ray will have the call just after 7 on MSG and WGR 550.

The night highlights a new partnership between the team and The BFLO Store, who become the official retail partner of the Sabres. The Sabres Store at KeyBank Center will feature items from The BFLO Store for purchase.

“The BFLO Store is proud and honored to partner with the Buffalo Sabres organization,” BFLO Store owner Nathan Mroz said. “We felt this was the perfect time to ink a deal with a team we feel is ‘on the rise.’ To now have the designation as both the ‘official retailer of the Buffalo Bills’ and now the Sabres is extremely exciting for us.

“We can’t wait to roll out exciting promotions with our partnership with the Sabres to continue to give Western New York new and unique shopping opportunities and experiences.”