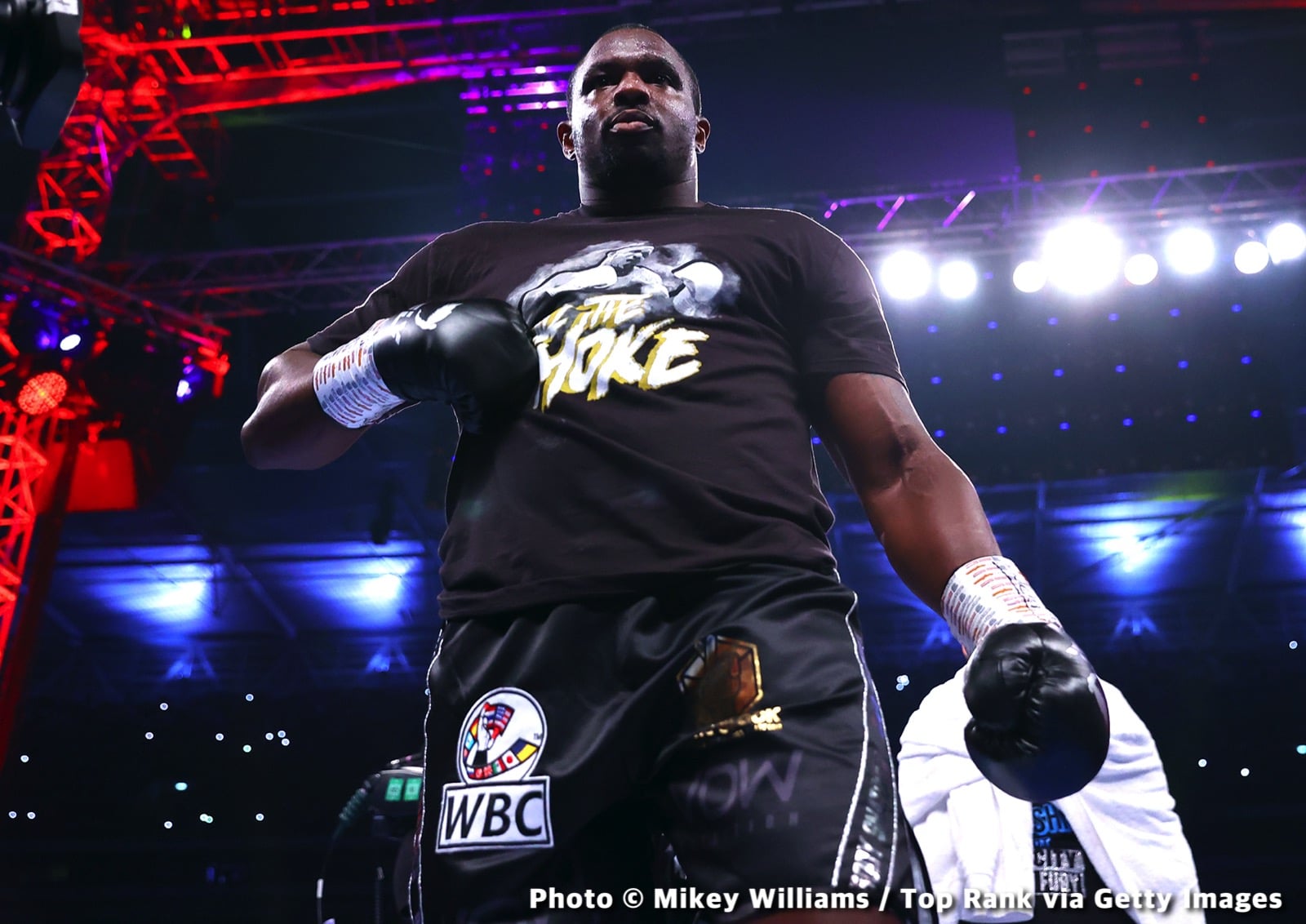 By Charles Brun: Dillian Whyte lost his cool with his hand-picked opponent Jermaine Franklin his ‘Face off’ show on Matchroom Boxing.

Eddie Hearn got Whyte (28-3, 19 KOs) worked up to a boiling broth when he told the little-known American fringe contender Franklin (21-0, 14 KOs) that he’ll make millions fighting Anthony Joshua next if he defeats Dillian this Saturday in their main event fight on DAZN at Wembley Arena in London.

That move by Hearn to motivate Franklin with the chance to make life-changing money fighting Joshua upset Whyte because he figures that he’ll be the one making big bank fighting AJ next.

The reality is Whyte doesn’t deserve a fight against Joshua, given that he’s lost two out of his last four fights by knockout and is fighting on the same level as journeyman Derek Chisora now. Whyte has transformed himself into Chisora 2.0, and he’s just horrible. If Joshua’s own career weren’t in such dire straights, Whyte wouldn’t be needed for a confidence booster.

Whatever fighter Whyte used to be, he’s not that guy anymore at 34. He’s clearly shot to pieces, which is why he’s being matched against #12 WBO Franklin rather than a top-ten heavyweight.

If Hearn was serious about wanting to put on a legit fight, he’d have picked a top ten contender like Joe Joyce, Frank Sanchez, Deontay Wilder, Andy Ruiz Jr, or Filip Hrgovic.

Those guys would make quick work of Whyte, which would ruin Hearn’s use of him to peddle a fight with Joshua to the UK fans. Even 43-year-old Luis Ortiz would likely beat Whyte at this deteriorating career stage.

“That’s why you’re a good promoter, Eddie because you’re motivating with money,” said Dillian Whyte to Matchroom Boxing about Eddie Hearn letting Jermaine Franklin know that he can make millions fighting Anthony Joshua if he defeats Dillian Whyte on Saturday.

“Talk to us more about millions,” said Whyte.

“If this guy beats you, you know, you’ve been there,” said Hearn.

“I’ve been managing myself, Eddie. I know the game,” said Whyte. “I get it. I understand the game.

“He’s got a big old body and a big old head. So he’s got some big old dreads in his head that might cushion the blows a little bit, so let’s see,” said Whyte about Franklin.

“Finally, you can look this man in the eye and tell him what happens on the 26th,” Hearn said to Franklin.

“I’m going to win on November 26th by knockout or by points,” said Franklin.

“Okay, I guarantee you that you don’t see twelve rounds,” said Whyte to Jermaine.

“Okay, you’ve got to prove it,” said Franklin.

“That’s what we’re going to do on November 26th,” said Whyte.

“You can talk about you knocking me out all you want to, but you’ve got to prove that s**t,” said Franklin.

“Guaranteed, this is a must-win,” said Hearn to Dillian.

“I said, ‘Listen, I want the biggest and the best fight.’ The big guys are tied up, and obviously, this guy is undefeated and has rank and says a lot of things. He calls himself the ‘Hood Warrior, 898,’ whatever that stuff means.

“He looks like a tough guy. He’s got the dreads, the beard, and stuff. He’s got the tracksuit. So, yeah, he’s the best guy,” said Whyte.

“So look this man in the eye and tell him what happens on November 26th,” said Hearn to Whyte.

“I’ve done it before. It’s nothing new to me. I’ve fought knockout artists, I’ve fought fast guys, I’ve fought cagey guys, and most of my fights are victories,” said Whyte.

“Do you beat this guy on November 26th?” said Hearn to Franklin.

“Do you believe you beat him by knockout?” said Hearn to Franklin.

“I beat him how I beat him,” said Franklin.

“Whether it’s by points or by knockout,” said Franklin.

“You already said you were going to knock me out. Why are you changing what you say?” said Dillian. “These guys say a lot of things, and when they get in the ring with me, now he’s thinking, ‘It’s crunch time now.’

“His a**hole is palpitating, thinking, ‘Alright.’ Let’s have a fight, bro,” said Whyte.

“I’ll take you outside, and I’ll show you what intimidation is,” said Whyte.

“I guarantee it will, though,” said Whyte.

“You stand outside, and you think I’ll be scared of you?” said Franklin.

“We’ll do the same work over here,” said Franklin. “I’m not worried about none of that s**t.”

“Keep it that way,” said Franklin.

“Alright, put work in on the 26th,” said Franklin.

“A chance for himself to project himself right onto the elite level of heavyweights. Dillian Whyte must win to earn himself a shot against the big boys once again in the heavyweight division.

“Wherever you are in the world, don’t miss the action, live & exclusive on DAZN,” said Hearn.