Full undercard announced for Crawford vs Avanesyan on Black Prime 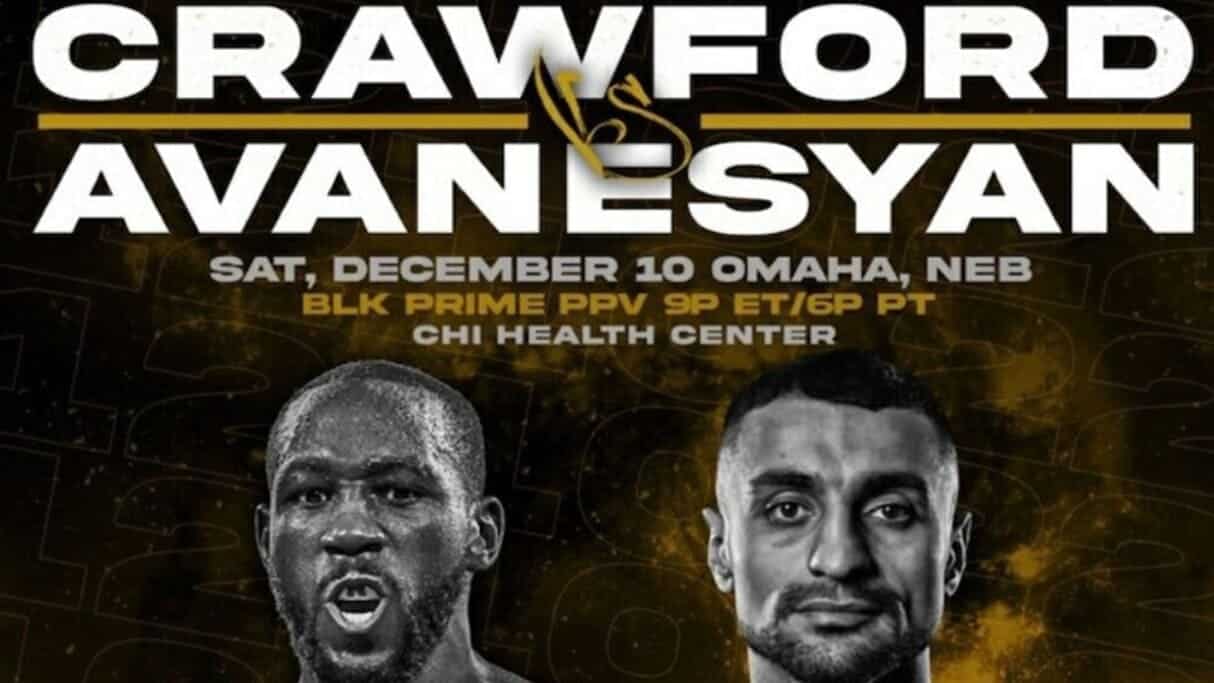 The undercard for the highly anticipated BLK Prime PPV fight between Terence “Bud” Crawford (38-0, 29 KOs) and David Avanesyan (29-3-1, 17 KOs), taking place at the CHI Health Center in Omaha, Nebraska, on December 10, is set.

Opening the PPV telecast will be a scheduled 8-round light heavyweight bout, showcasing Steven Nelson (17-0, 14 KOs) of Omaha, Nebraska, vs. James Ballard (10-4, 3 KOs) of Detroit, Michigan.

Khegai has a fan-friendly style and always comes forward with aggressive pressure. His lone defeat is at the hands of two-time world champion, Stephen Fulton (21-0, 8 KOs), a fight that went twelve full rounds. A victory against Baez will get him right back into world title contention.

“Baez stands in the way of my goal to become a world champion,” said Khegai. “He’s fought at the championship level and beating him will get me one step closer to landing a big fight. I must win this fight to stay relevant in the world title picture.”

Baez, known for his tremendous toughness, is coming into this fight with his back against the wall. In his last outing, he challenged the monstrous Emanuel Navarrete (36-1, 30 KOs) for his WBO world title, a fight where he got caught with a solid body blow. With nothing to lose, Baez sees this fight as a do-or-die situation.

“I must win this fight, and I’m going to do everything possible to come out on top,” Baez stated. “Khegai is not invincible, he’s been beaten before. I have the

experience needed to win this fight. Those tuning in will see an all-out war, I’m going to make this a Mexican-style slugfest.”

Milton, recognized for his heavy hands, stands 6′ 4″. He trains out of Las Vegas, Nevada, where he’s shared the ring with Tyson Fury, Luis Ortiz, Joy Joyce, along with a bunch of other top heavyweights. In addition, Milton has multiple knockouts that have gone viral on the internet.

“Five fights in one year because I had to! I wouldn’t want to end the year any other way. Make sure to drop my name whenever they ask who got next. Dreamland Milton from Tulsa Oklahoma, representing Black Wall St. on BLK Prime.”

Calloway has never been stopped and all his wins have come by way of knockout. Standing 6′ 3″, Calloway has the power and durability to give Milton his stiffest test to date.

“Going into any fight, my goal is always to score a knockout, and that will be the case when I step in the ring with Milton,” said Calloway. “I’m excited to be

fighting on a great card, especially with Terence Crawford, who is the pound-for-pound king right now.”

Nelson, a U.S. Army veteran and former member of the Army World Class Athlete program, is a hometown hero and local fan favorite. He vows to come out victorious with a spectacular performance.

“Fighting at home in Omaha is a blessing and the CHI Health Center is always electrifying,” said Nelson. “It’s been two years since my last fight but I’m more than ready to leave everything in the ring against Ballard,” said Nelson.

“Winning this fight will put me back in the rankings and in line to fight for a title in the near future. I’ve been training with Terence and the B&B team in Colorado Springs, so best believe I’ll be in the best shape of my life.”

Ballard has faced stiff opposition in his last three fights and is ready for the challenge that is in front of him. He feels he’s gained valuable experience throughout his career that will help him win this fight.

“I’ve learned more from my losses than my wins and the experience I’ve gained is what I believe will be the difference in this fight,” said Ballard. “I’m coming into this fight in great shape, and I’ll be letting my hands fly with bad intentions.”

Opening the card will be a welterweight bout between Alton Alik Wiggins (Pro Debut), of Oakland, California, vs. Phillip Carmouche (2-3), of Las Vegas, Nevada. (4-rounds)