Luukkonen earns praise from fans, teammates with 34-save performance 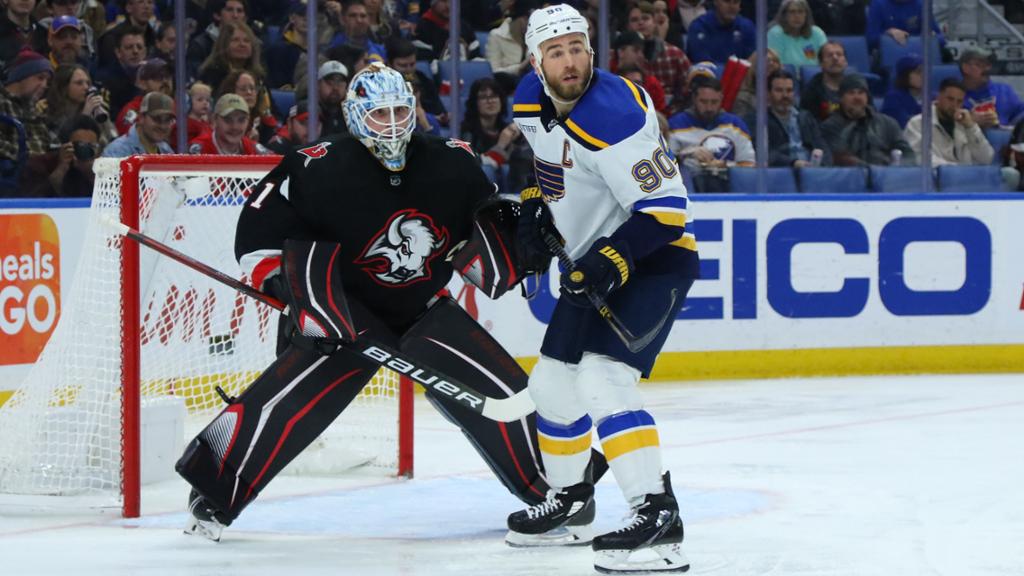 Ukko-Pekka Luukkonen could not recall hearing his name ever being chanted the way it was on Wednesday, when each of his 34 saves were followed by a long, drawn-out “Luuuuuuu” from the 17,302 fans who filled the KeyBank Center stands – plus a few others in uniform.

“We were joining in a little on the bench,” Jack Quinn, his teammate for two seasons in Rochester and now in Buffalo, admitted afterward.

The chants could be heard again from inside the Sabres’ dressing room as teammates awarded Luukkonen with player of the game honors following their 6-2 victory over the St. Louis Blues.

The honor, on a night when Quinn and Jeff Skinner both scored two goals, was a testament to Luukkonen’s solid, consistent performance, but also to his standing among his teammates.

“He’s just a good guy and a good person,” Sabres coach Don Granato said. “He’s quiet but you can tell he’s a team guy and good person. That resonates.”

Luukkonen was making his second start since being recalled from Rochester on November 17 in the wake of a lower-body injury to Eric Comrie. He had made 18 saves in the previous game, a 5-2 loss in Toronto in which the Sabres felt they strayed from their aggressive, confident identity in front of him.

They recaptured that identity in a road win over the Canadiens on Tuesday and rolled it into the game against the Blues, feeding on the energy from a raucous crowd that was ready to celebrate the return of the black and red “goathead” sweater that had not been worn in more than 16 years.

Luukkonen was a crucial last line of defense as the Sabres built their lead, staving off a veteran Blues team that came into Buffalo on a seven-game winning streak. Granato pointed specifically to the second period, when the Blues – trailing 4-1 – rattled off eight shots in less than seven minutes.

“Uppie was great tonight I thought in that second period,” Granato said. “That could have been different going into the third and he had some segments with big saves in the third until we did get back to a rhythm.”

Luukkonen made a point-blank stop on Alexey Toropchenko from the slot. He sprawled to rob Jordan Kyrou. He engulfed shots from distance with his 6-foot-5 frame.

Each time, the crowd responded – starting as a murmur and growing with each passing save.

“Of course, you notice it,” he said. “I think overall it was great to see how many fans we had tonight. I think that’s a big lift for the whole team and we always appreciate that. Most of all that builds up your confidence, but it always helps when the fans are backing you up.”

Luukkonen gained confidence during a nine-game stint with the Sabres last season, when he posted a .917 save percentage before an injury sidelined him for nearly a month. He parlayed that performance into a productive summer, catching the attention of coaches with his improved agility.

“He’s progressed from last year to this year,” Granato said. “He looks like a different athlete. He leaned. His body composition is completely different. He can move around the net quicker with more agility and obviously less fatigue because he’s moving more efficiently.”

He impressed during the preseason before leaving to start the season with Rochester, with the team placing an emphasis on his playing time. He was a workhorse for the Amerks to open the season, starting nine of 11 games before the injury to Comrie led to his recall.

All the while, general manager Kevyn Adams maintained the organization’s belief in his future as an NHL goaltender. Luukkonen showed why against the Blues.

“He’s a stud back there,” Quinn said. “He’s a big guy, super athletic. I’ve been able to play with him for the last two years so I know how good he is. It’s no surprise he’s playing that well.”